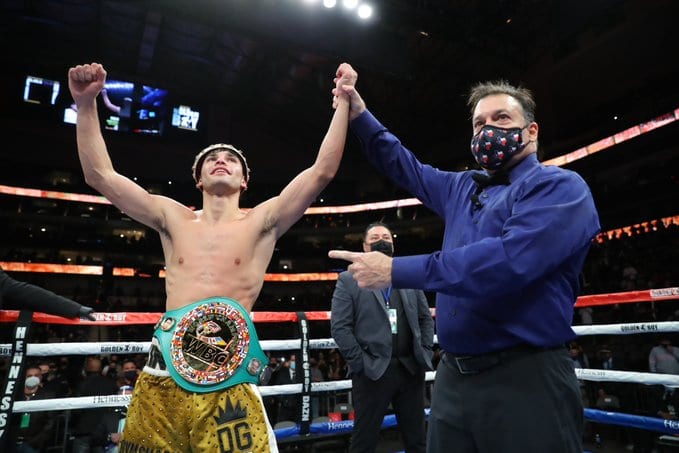 On just the second day of 2021 there were some lingering questions about what would happen if  rising unbeaten, Lightweight rising contender, Ryan Garcia, got in with an established fighter?

In a battle at the American Airlines Center in Dallas, Texas, the unbeaten, 22 year old Garcia tasted the canvas for the first time as a professional. That’s when the former Olympic Gold Medalist Campbell caught him flush with a left hook midway through the second round dropping Garcia onto the seat of his pants.

Fighting for the first time since February, Garcia, 21-0, 18 KOs, did appear to be a little stunned, but not seriously hurt. This, as Campbell tried to press the advantage in the final minute of the second frame. “Coolhand Luke” as he’s known, landed a couple more glancing lefts before the bell.

To his credit, Garcia did not allow the knockdown to stop his aggression to continue coming in against the southpaw Brit. Garcia continually landed with straight right hands and combinations behind them, even shortly after being down.

Garcia appeared to win both the third and fourth round with his aggression and landing more significant punches. Then, in the fifth round, Garcia stunned Campbell, now 20-4, for the first time with a right followed by a left at the bell.

Campbell seem to still be dazed at the beginning of the 6th round of the scheduled 12-round battle. This as, for the first minute, Garcia trapped him repeatedly along the ropes and landed several rights and lefts and a body punch or two Campbell trying to cover up.

The counter left was Campbell’s only significant punch, but it was far too infrequently in this one. He was fighting for the first time in 17 months after being dominated in a 12 round loss to Vassiliy Lomachenko in August 2019.

Ultimately it was a single shot, two minutes into the 7th round that ended things in the “Lone Star State.”

That’s when Garcia caught Campbell in the right side/rib cage with a hard left hook. Campbell buckled backwards for one second, and then went down on one knee. Unable to catch his breath and wincing, Campbell, then went on to both knees and both gloves and was counted out at 1:58 of the seventh.

“I think I showed a lot of people who I really am. I wanted to show people that whatever they call you, they want to call me a social media star. I showed that I can get better,” Garcia said post fight to DAZN streaming service.

“They call you things…. and tell you that I can’t be something. I chose to be a champion tonight. I wouldn’t let nothing stop me,” he continued.

When asked about being knocked down for the first time ever,

“When he dropped me, I wasn’t going to let nothing stop me…. I think I got a little too excited over the moment. You (Campbell) dropped me…. I had to calm down. I was a little dizzy. I’m not going to lie. But, I wasn’t too worried.”

The win solidifies Garcia, as the top contender at 135 lbs. for one of the champions to fight in 2021. That includes, unbeaten New Yorker, Teofimo Lopez, who just won the Undisputed version of the Lightweight titles by beating Lomachenko in October.

Garcia is also now the mandatory challenger for unbeaten, WBC World Champ Devin Haney, who was ringside in Dallas on Saturday night.

However, when the fight was done, Garcia made clear that he would love unbeaten, two division World Champ Gervonta Davis in his next bout.

“I want to be a man of my word. I want to fight ‘Tank’ (Davis). I’m ready for it. This fight I put down an Olympic Gold Medalist. Lomachenko couldn’t stop him. Linares couldn’t finish him. I showed today, I’m special.”

However, that fight will be problematic, as Garcia fights for Oscar De La Hoya’s “Golden Boy Promotions” which is an arch enemy of Davis’s “Premier Boxing Champions.” And, it’s unlikely that those sides would agree any time soon to stage a co-promoted battle.

While his next about may be in doubt, there can be no mistake that Garcia answered the toughest test of his young career to date, emphatically, with a body shot that will have the boxing world buzzing for a few days.