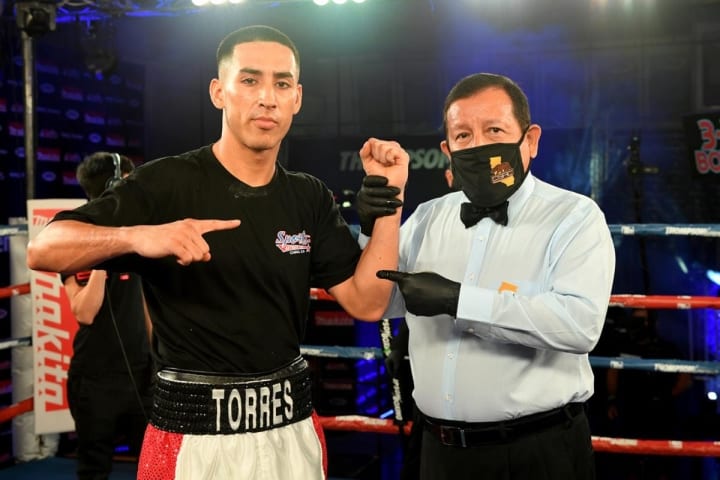 This Sunday night at the Omega Products International Event Center in Corona, CA, Thompson Boxing Promotions hosted the second edition of their popular 3.2.1. Boxing series of 2021.

The Thompson Boxing card mainstay scored his first knockdown came when Torres landed a vicious left hook to the head, while the second one happened by way of a left hook to the body. The referee saw enough and stopped the bout at the 1:04 mark of round one. Torres remains unbeaten and will look to step up in his next fight, with the thoughts of getting ranked in the top 15.

“I was really sharp today and my timing was right on,” said Torres.

“I’m very thankful to be staying busy and the support from my promoter, Thompson Boxing, is incredible. I’m ready for the next level and I can see myself in some big fights with the pandemic coming to an end. I’m gong to stay focused and get right back in the gym.”

In the 8-round co-feature super lightweight slugger, Miguel “El Explosivo” Madueno (23-0, 21 KOs) demolished, Bergman Aguilar (15-7-1, 5 KOs) by way of a brutal overhand right to the head during an exchange at the end of the opening round. Aguilar did not get up after being dropped and the referee officially called off the bout at the 2:59 mark of round one.

“I wanted to send a message to everyone in my division,” said Madueno.

“I’m a power puncher with a lot of heart and fans will get to know me more each and every time I step in the ring. I believe I’m the top prospect in boxing and I’ll continue to prove that in each fight. I’m hoping to step up against a big name in my next fight.”

Acosta outworked Ramirez from the opening round to the final bell, landing clean body and head shots throughout the fight. Scorecards read 60-54 across the board.

“I was in great shape going into this fight and I felt strong in there tonight.” said Acosta.

“I was in control the entire fight and I almost got him out of there in the fifth round. Ramirez was a tough opponent who showed a lot of heart. I’m ready to get back in the gym to start training for my next fight, which will hopefully be sooner than later.”