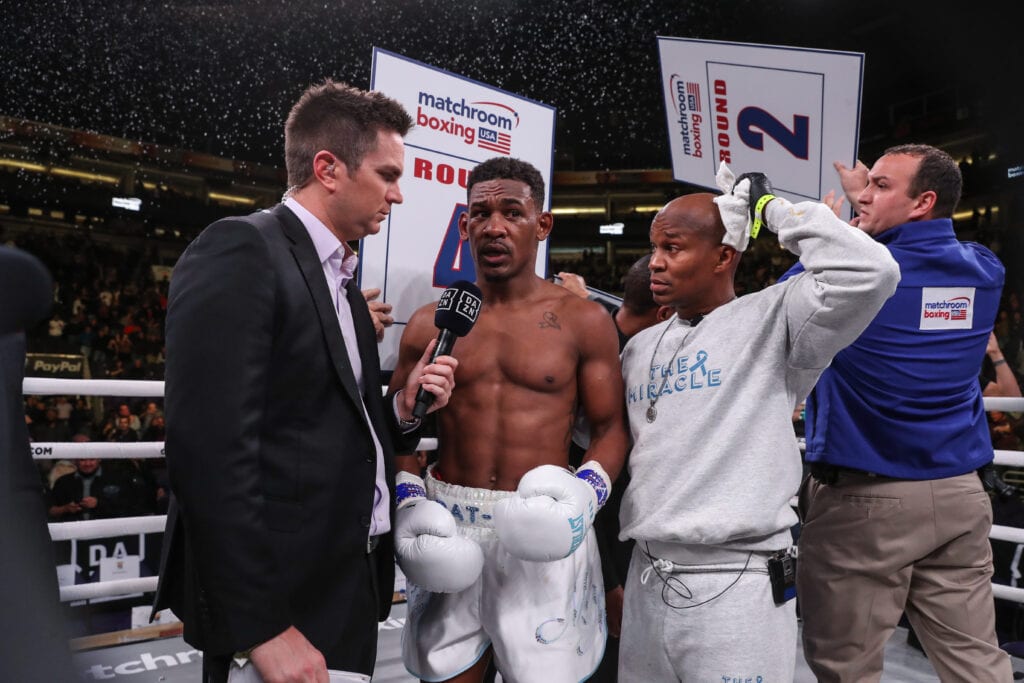 Julio Cesar Chavez Jr. came into the contest against Daniel Jacobs  Friday night in a cloud of legal troubles, five pounds overweight, and after five rounds left in defeat in front of a crowd that wasn’t having it at Talking Stick Resort in Phoenix, Arizona.

The crowd of over 10,000, a majority of them supporting Chavez, witnessed what the main event on the streaming service DAZN that showed Jacobs have troubles in the early rounds but was able to land combinations and looked like he was starting to pick apart Chavez was.

Check out our latest edition of the Big Fight Weekend talking about this fight and more.

At the end of the fifth round, Chavez didn’t return from his corner, complaining of a hand injury and referee Wes Melton called this fight over and a victory for Jacobs (36-3, 30KOs). After he signaled this fight over, those in attendance began throwing things into the ring, expressing their displeasure in the result. It got to the point where blow by blow man Brian Kenny was pelted by something and caused Chavez Jr. to be hurried out of the arena being shielded from objects with the “Round 6” ring card normally being held by ring girls which were instead by security.

The crowd and analyst Sergio Mora didn’t hold anything back and said that Chavez Jr. quit on the fight, and with the situations leading up to this fight, you’d be hard to believe otherwise. Julio Cesar Chavez Sr. after the fight shared in his Twitter, his son, as he has to undergo hand surgery for his hand.

The victor Jacobs expressed after the fight that he wasn’t to blame.

“I just want to savor this victory; [the fans] won’t let me, though I know they don’t blame me for this,” said Jacobs to Chris Mannix. “I did my part.”

While we’ll sit here and question Cheave Jr, who falls to 51-4-3, the reality is this was a hometown fight for him in Phoenix and will not be the end of the line for him despite the defeat. For Jacobs, the victory he is hoping will put him back in the mix of the names at super middleweight.

I don’t see Jacobs getting any of that next but it’ll see where he stacks up if he continues fighting at 168 in 2020.