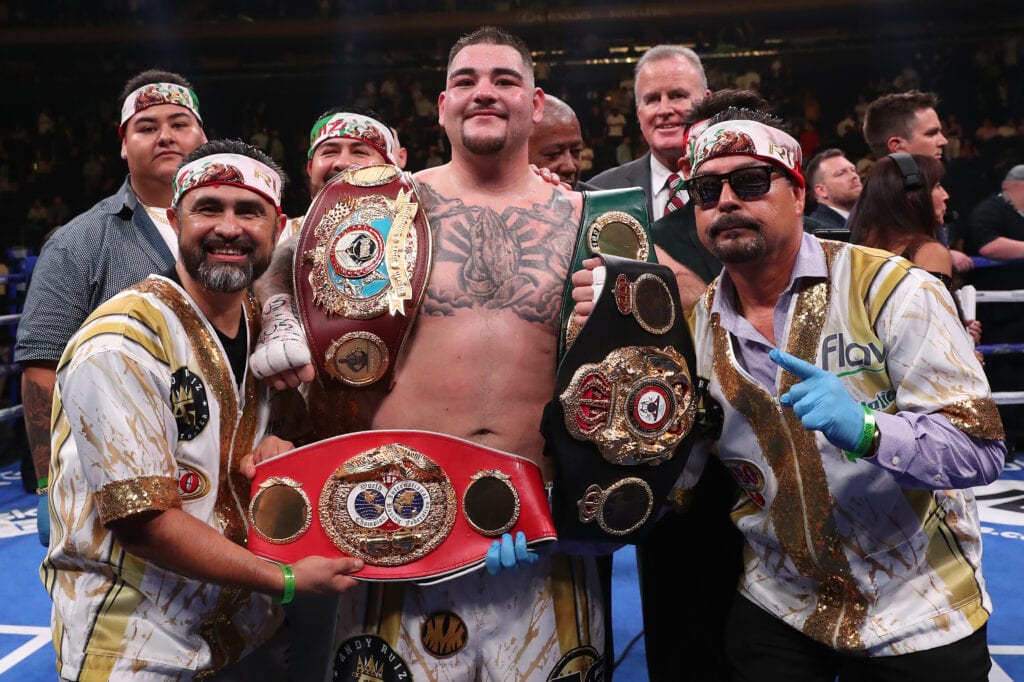 Coppinger tweeted that Ruiz, who stunned Joshua June 1st with a 7th round TKO at Madison Square Garden to capture the WBA, IBF and WBO Heavyweight Titles, wants a much bigger guarantee to go all the way to the Middle East for the rematch.

Ruiz, who took the fight as a replacement for fellow American Jerrell Miller on seven weeks notice, was reportedly guaranteed $7 million for his upset win.

So it stands to reason, that Ruiz should get significantly more than that in December, as he is now the champion defending his titles.

Joshua, the unbeaten superstar from the UK had been previously guaranteed $25 million to come to the United States and fight Miller on June 1st. That amount was reportedly reduced, when Miller flunked his pre-fight drug test and was replaced. That caused Matchroom Boxing and DAZN streaming to scrap all of their promotional onslaught for the Pay-Per-View.

The best estimate is the Joshua still received around $20 million for the loss at MSG.

The rematch date and location was announced on social media by Joshua and DAZN Friday afternoon, as December 7th in Riyadh, Saudi Arabia.

However, Ruiz and his team haven’t made a peep about the fight (Ruiz tweeted or retweeted two things unrelated to the rematch Friday).

As for the money that is already pouring in, for the proposed date in Saudi Arabia:

The Sun reported earlier Friday morning that the host country put up close to $100m guaranteed for the contest to take place in Riyadh.

ESPN’s Boxing insider, Dan Rafael, reported Friday afternoon, that the fight will be held just outside of Riyadh in the city if Diriyah, where there will be a special outdoor stadium constructed for the bout. Rafael further wrote, that DAZN streaming is expected to secure the U.S. rights (and worldwide streaming rights outside the U.K.), but that it’s not a done deal.

One huge selling point for the profitability of Joshua-Ruiz II is that England’s Sky Sports Pay per View stands to make much more massive money with this fight in primetime in the U.K. on Saturday December 7th. The first Joshua-Ruiz fight in New York began after 4 a.m. local time Sunday morning June 2nd in England.

So needless to say, Ruiz could hold out for much more than a proposed $9 million guaranteed, and a good percentage of the revenue from DAZN and the Sky Sports Pay Per View.

And, even though he might agree soon, Ruiz appears to be in position to get much more.

After all, there’s no rematch, unless he does.