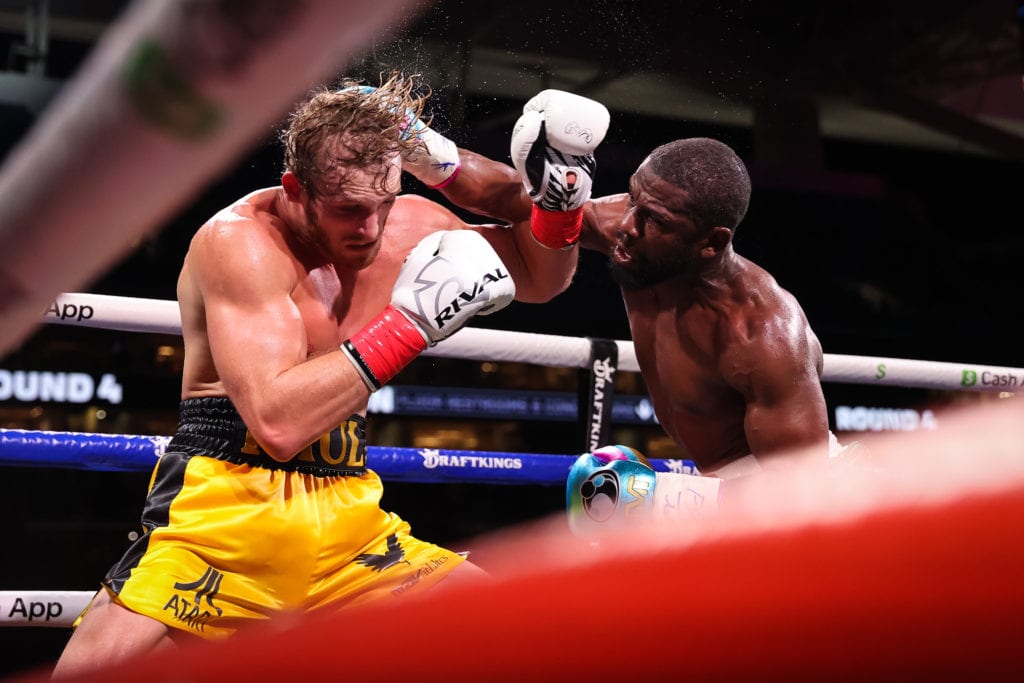 The aftermath and analysis continues for last Sunday’s “exhibition” PPV bout in Miami with former five division world champ Floyd Mayweather and Youtuber Logan Paul. And, in terms of the number of audience actually buying the PPV the numbers appear to be solid.

Mike Coppinger, insider for the Athletic, reported on Wednesday night that he’s learned that Mayweather-Paul will end up having generated “over one million buys on pay per view,”

Sources: The Floyd Mayweather-Logan Paul exhibition generated over 1 million buys on pay-per-view. The PPV was available via Showtime and Fanmio at $49.99. There’s no precise PPV number available yet, but the show will at least exceed 1 million in buys

Coppinger wrote on the site,

“The exact number is not available yet and could be significantly larger….

The Mike Tyson-Roy Jones Jr. exhibition — another novelty event like Mayweather-Paul — cleared 1.5 million, but the last professional boxing match to cross the million mark was the rematch between Canelo Alvarez and Gennadiy Golovkin in 2018.

The last PPV to come close was the rematch between Deontay Wilder and Tyson Fury in February 2020, which generated nearly 900,000 buys.”

Now, as we have pointed out repeatedly, the Tyson-Jones November exhibition and the subsequent Jake Paul-Ben Askren fight card in April were both on Triller. And, despite their claims of purchases exceeding a million, Triller is a private app company, and no one really knows how much audience there was or there wasn’t for those two shows, independently?

Further, the Mayweather-Paul numbers have ambiguity, right now, as well.

This, as we wrote and it will factor into the PPV tabulations, Showtime had a mess with at least thousands and thousands of fans unable to stream the Mayweather-Paul fight card through the Showtime app to their device throughout last Sunday night. As the problems persisted and at the conclusion of the exhibition main event, the premium cable network eventually tweeted out this offer to the many frustrated fans:

We are processing refunds for anyone who was unable to stream last night’s PPV event through http://showtime.com or the SHOWTIME app. To submit your refund request, please go to https://showtimeppv.zendesk.com/

So, that could affect the final numbers, but we may never know the truth on how many disgruntled fans asked for and got refunded for not being able to see the fights, despite buying them?

It also should be pointed out that while the suggested price for the PPV through cable systems and satellite providers was $49.95, that others could have charged more or less for it. Also, to be clear, you were definitely paying $49.95 to buy it last weekend through Showtime and their app.

Still, when Mayweather-Paul was originally announced last December, it was being offered with an “early bird” discount by the Fanmio app. Again, it’s not clear what number of people (thousands? maybe more?) took advantage of the discount offer and that info may never be revealed.

All of that will factor into the revenue from the exhibition fight card last Sunday.

Tyson Fury-Deontay Wilder III To Be Announced Tuesday
Jeremias Ponce Looking For Knockout Against Ritson
Advertisement
To Top
We use cookies to ensure that we give you the best experience on our website. If you continue to use this site we will assume that you are happy with it.OkPrivacy policy