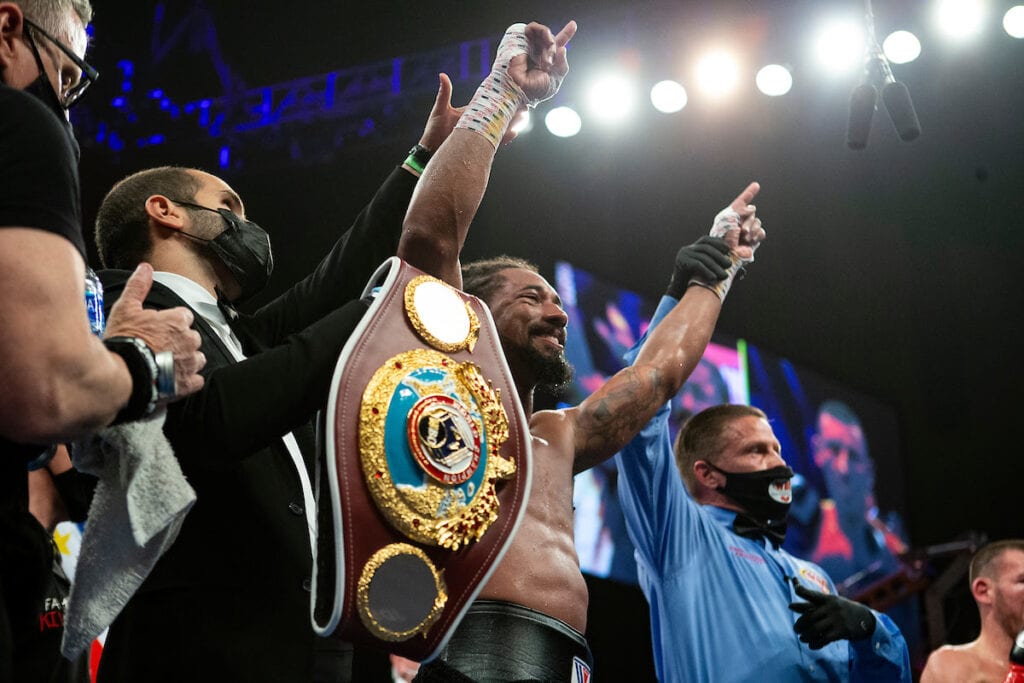 WBO middleweight champion Demetrius Andrade is set to be in action again as he takes on Jason Quigley as both have agreed to terms for a middleweight title fight that will headline a DAZN-streamed championship tripleheader on Nov. 19, per a report by ESPN’s Mike Coppinger.

Coppinger’s report stated that the fight location was in New England, which last checked is a region and not one of the nifty-fifty United States, so the venue is to be determined someplace in Connecticut, Maine, Massachusetts, New Hampshire, Rhode Island, or Vermont. The Providence, Rhodie Island native champion Andrade was last fight in his backyard in 2019, defeating Maciej Sulecki by unanimous decision at the Dunkin Donuts Center.

The excellent news is Andrade will have another fight to stay active., who last seen in April defeating Liam Williams in Hollywood, Florida.

That is about it.

Quigley (19-1, 14 KOs) gets a title shot after winning a tough majority decision against Shane Mosely Jr. in May. During that contest, Andrade stated to Chris Mannix, who was calling the fight for the streaming service DAZN, that “he could’ve beat both guys at the same time.” Once the war becomes official, expect the Sportsline to reflect the same in favor of Andrade.

The rest of the tripleheader in the report stated that Murodjon Akhmadaliev would defend his unified 122-pound titles against Ronny Rios in the co-main event, per sources. Akhmadaliev won the belts in a close contest against Danny Roman back in 2020 and last defended against mandatory challenger Ryosuke Iwasa, stopping him in six rounds.

Also,  Julio Cesar Martinez puts his 112-pound belt title on the line vs. McWilliams Arroyo. Martinez takes on his mandatory in Arroyo in a fight initially set up to happen in February but had to withdraw due to injury. Martinez last defended the title, stopping Joel Cordova in six rounds last June in Guadalajara, Mexico.