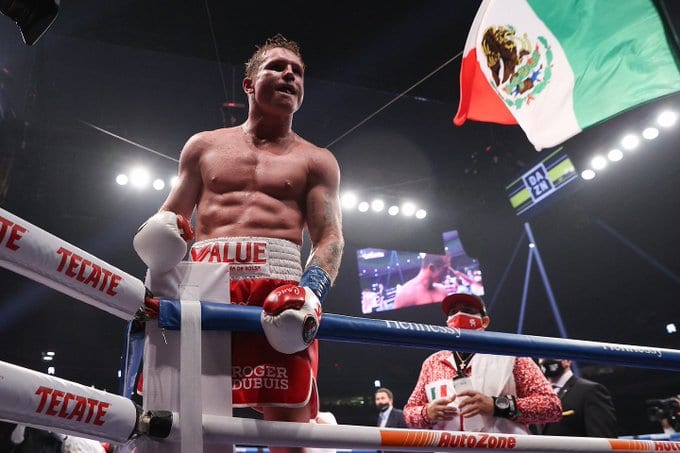 Two weeks ago Canelo Alvarez returned to the ring for the first time in more than a year winning the Unified Super Middleweight Championship. So it comes as no surprise on New Year’s Day the Canelo is making it known that he no longer intends to keep his remaining 160 lb. title in the future.

Off his easy 12 round decision win over Callum Smith on December 19th, Boxingscene.com reported Friday that Alvarez’s manager and confidant, Eddy Reynoso, confirmed they are vacating the WBA Middleweight Belt. That is the last of the titles that Alvarez previously possessed at 160 lb.

“He is 168 now, it is his prime weight,” Eddy Reynoso, Alvarez’s head trainer and manager confirmed to BoxingScene.com on Friday. “It is where he feels strongest and we are not giving away anything in weight anymore at middleweight.”

Further, it’s clear after Alvarez fought as a Light Heavyweight, when he defeated Sergey Kovalev for the WBO World Championship in November of 2019, that he does not feel the desire any longer to fight below 168 lb.

The WBA will now elevate Japanese fighter Ryota Murata as is there a new “World” champion, but he last fought in December of last year. Murata has held the “interim” WBA Championship, while Canelo fought Kovalev and Smith, but had not fought as a Middleweight since his bout with Daniel Jacobs in May of 2019.

It was after that Jacobs fight that the IBF ordered Canelo to do a deal with their number one contender, Sergey Derevyanchenko. And, that’s when Canelo’s former promoter, Oscar De La Hoya, couldn’t get the agreement done by their deadline. So, the IBF stripped Alvarez, which enraged Canelo and set into motion their eventual divorce from Golden Boy Promotions late last year.

As for the IBF 160 lb. title,  former Undisputed middleweight champion Gennady Golovkin recaptured that belt by beating the Derevyanchenko in a hotly-contested decision in the Fall of 2019.

Back to Alvarez. He added winning the WBA Super Middleweight Championship off of the Smith victory is expected to now defend against the WBC’s number one Contender at 168 lb., Turkey’s Avni Yildirim in February in Guadalajara, Mexico.