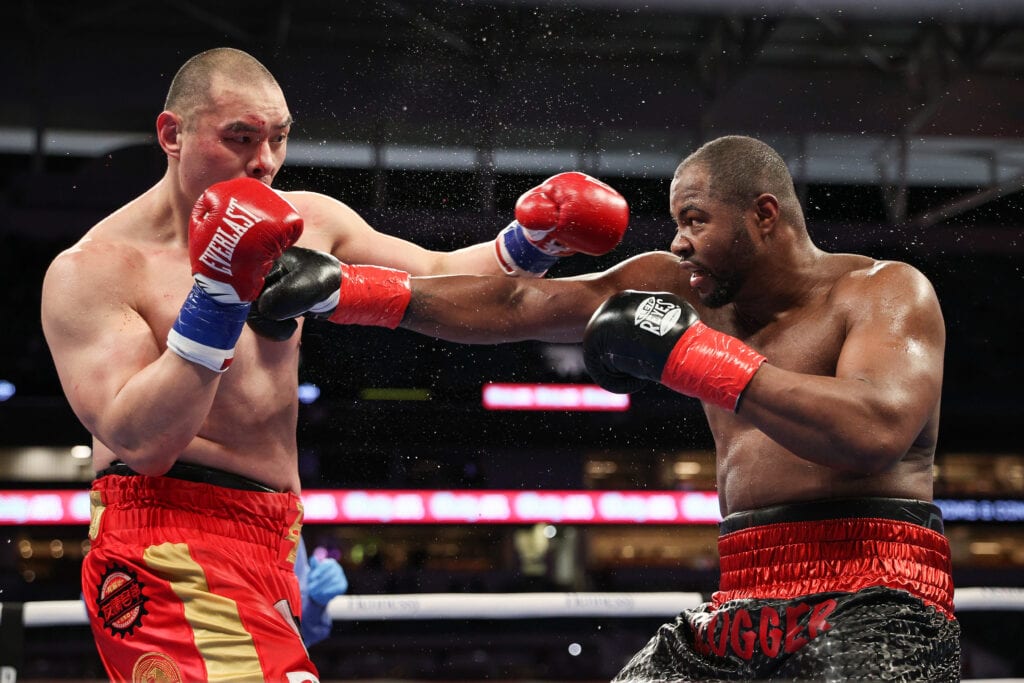 On Monday we learned that Croatian heavyweight contender Filip Hrgovic had bowed out of his Saturday night Las Vegas IBF eliminator bout with Chinese contender Zhang Zhilei. Now, on Tuesday evening, there’s been an emergency replacement found for Zhang to go ahead and be on the card.

Our insider Dan Rafael tweeted he’s learned that California Heavyweight Scott Alexander will be that replacement on the undercard of the Canelo Alvarez-Dimitry Bivol WBA world light heavyweight main event,

Per source: With Hrgovic off the #CaneloBivol card Zhang Zhilei will instead face late replacement Scott Alexander in a 10-rounder. Alexander is 16-4-2 but has never been stopped in any of his losses. Props to @MatchroomBoxing for finding an opponent so Zhang camp isn't wasted.

As Dan mentioned, Alexander, who just turned 33 last week, doesn’t have an overwhelming record, but he’s also been very competitive throughout his career without being knocked out. Alexander’s last bout was in May of last year on an eight round decision loss to Carlos Negron in Carson, CA.

Hrgovic withdrew in recent days because of the death of his father about a week ago, according to sources. After learning of the elder Hrgovic’s passing, Matchroom Boxing launched a search for a new opponent to face Zhang on short notice knowing there was a good possibility that Hrgovic would eventually pull out.

“El Animal” Hrgovic (14-0, 12 KOs), 29, who was a 2016 Olympic super heavyweight bronze medalist for Croatia, and Chinese southpaw Zhang (23-0-1, 18 KOs), who was a 2008 Olympic super heavyweight silver medalist and a 2012 Olympian, were due to meet for the right to become the mandatory challenger for the IBF belt held by unified world titlist Oleksandr Usyk, who first has a rematch on tap with former titlist Anthony Joshua slated for July.

Hrgovic-Zhang came together only after several others ranked ahead of Zhang in the IBF rankings turned down the fight or were unavailable to face Hrgovic in the title eliminator, including Luis Ortiz, Joseph Parker, Tony Yoka, Joe Joyce, Agit Kabayel, Andy Ruiz Jr., Murat Gassiev and Demsey McKean.

Zhang had released a social media post Monday evening saying that he understood from his own experience of having a parent pass away during training what Hrgovic was dealing with, now.

And now, he’ll still get to follow through and have a fight in what should be a tremendous atmosphere at the T-Mobile Arena Saturday night.

Tom Brown Claims Canelo Turned Down $100 Mil For Charlo Then Spence
How Did Dmitry Bivol End Up In Canelo “Golden Ticket” Bout?
Advertisement
To Top