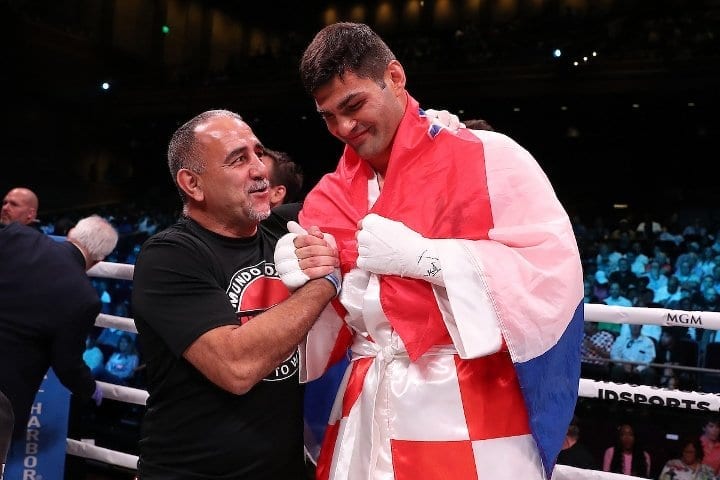 LAS VEGAS — Heavyweight contender Filip Hrgovic has withdrawn from an IBF title elimination fight against Zhang Zhilei that was scheduled to take place on the undercard of the Canelo Alvarez-Dmitry Bivol light heavyweight title fight on Saturday (DAZN PPV and PPV.com, 8 p.m. ET) at T-Mobile Arena, sources with knowledge of the situation told Big Fight Weekend.

Hrgovic withdrew in recent days because of the death of his father about a week ago, according to sources.
After learning of the elder Hrgovic’s passing, Matchroom Boxing launched a search for a new opponent to face Zhang on short notice knowing there was a good possibility that Hrgovic would eventually pull out
It is unclear whether a new opponent has been secured and whether Zhang will remain on the card? Matchroom Boxing declined to comment on Monday.

“El Animal” Hrgovic (14-0, 12 KOs), 29, who was a 2016 Olympic super heavyweight bronze medalist for Croatia, and Chinese southpaw Zhang (23-0-1, 18 KOs), who was a 2008 Olympic super heavyweight silver medalist and a 2012 Olympian, were due to meet for the right to become the mandatory challenger for the IBF belt held by unified world titlist Oleksandr Usyk, who first has a rematch on tap with former titlist Anthony Joshua slated for July.

Hrgovic-Zhang came together only after several others ranked ahead of Zhang in the IBF rankings turned down the fight or were unavailable to face Hrgovic in the title eliminator, including Luis Ortiz, Joseph Parker, Tony Yoka, Joe Joyce, Agit Kabayel, Andy Ruiz Jr., Murat Gassiev and Demsey McKean.

Matchroom Boxing promoter Eddie Hearn, who co-promotes Hrgovic with Wasserman Boxing, and promotes Zhang, won a purse bid for the eliminator with an offer of $650,000. It beat the only other offer of $410,000 from ProBox Promotions.

Shoulder Injury Forces Demetrius Andrade Out Of May Parker Bout
Anthony Joshua Fights To Remain On Sky Sports?
Advertisement
To Top
We use cookies to ensure that we give you the best experience on our website. If you continue to use this site we will assume that you are happy with it.OkPrivacy policy