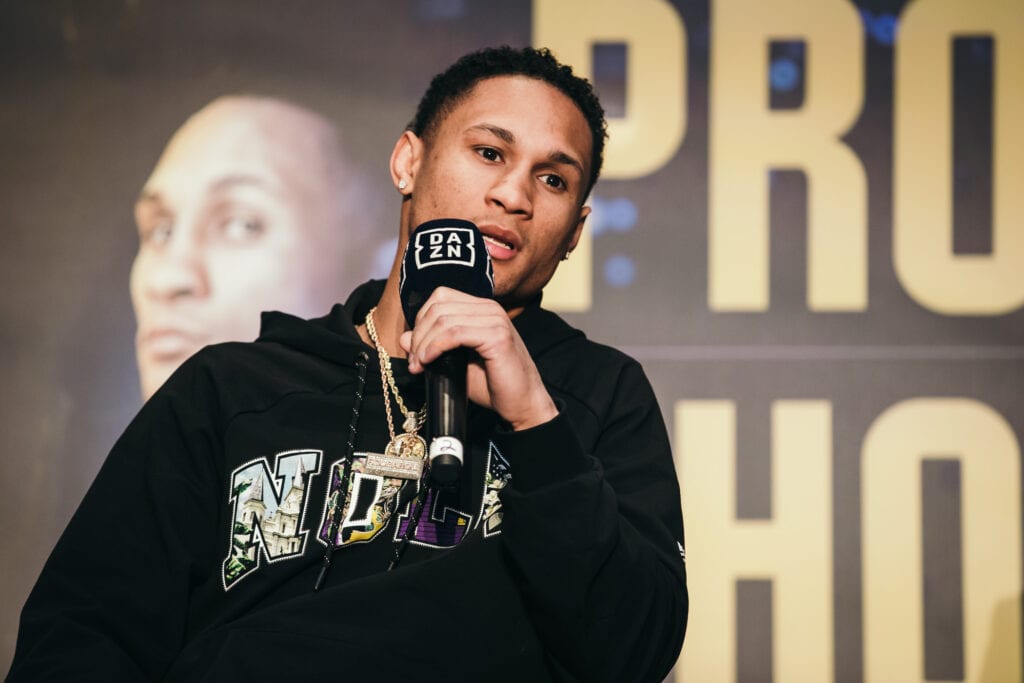 Regis Prograis Back In Ring In March

Former WBA World Jr. Welterweight champ Regis Prograis has a new deal with Probellum Entertainment and now, he has his first bout with them on the docket, as well. Prograis will be part of a double header March 19th in Dubai, as he takes on Ireland’s Tyrone McKenna in a non-title contender bout.

Joining our star-studded #Evolution event in Dubai, a big fight between two rivals!@RPrograis vs. @Tyronemck

From the Probellum release,

Dubai Duty Free Tennis Stadium, located at The Irish Village, in association with Jumeirah Creekside Hotel, will host Probellum’s first shows of the year – and one of the UAE’s biggest-ever boxing showcases – on March 18 and 19.

The main and co-main event for night one will be announced this week, while two fantastic bouts top the bill on the second night, with IBF flyweight champion Sunny Edwards (17-0, 4 knockouts), from the UK, defending his title against Muhammad Waseem (12-1, 8 knockouts), one of Pakistan’s biggest boxing stars, in the headline contest.

That will be preceded by an intriguing clash between Ireland’s WBO intercontinental super-lightweight champion Tyrone McKenna (22-2-1, 6 knockouts) and Regis Prograis (26-1, 22 knockouts), the American former super-lightweight world champion who signed to Probellum in October.

“We are absolutely delighted to be returning to Dubai for our first event of 2022,” said Richard Schaefer, President of Probellum.

“Probellum has made a huge impact in the boxing world in a short period and we have some major plans for this year, starting with these two history-making shows in Dubai.

“There was a fantastic response to our first-ever event, which took place in Dubai at the end of last year, and we know there is a big appetite for boxing in the city.

“These two shows will feature many top-quality fighters from around the world, including Sunny Edwards, Muhammad Waseem, Tyrone McKenna, and Regis Prograis. We would encourage fans to secure tickets early in order to ensure they don’t miss out on what will undoubtedly be another fantastic event.”

With the shows taking place over St Patrick’s Day weekend, there will be an Irish theme to proceedings and more of the country’s most impressive boxers, in addition to McKenna, are set to be confirmed for the event over the coming weeks.

The Louisiana native Prograis, has bounced around from promotion to promotion since leaving Lou DiBella Entertainment in 2019. This includes a single fight with Premier Boxing Champions in 2020 and also Triller’s “Fight Club” series in the Spring of 2021. He’s obviously looking to get back into the Jr. Welterweight title picture and potentially, get a rematch with Undisputed 140 lb. champ, Josh Taylor.

Those two fought at a hotly contested battle in the World Boxing Super Series tournament finale’ in London October of 2019. That’s when Taylor nosed out the previously undefeated Prograis on a 12 round decision. Taylor has since won the Undisputed Jr. Welterweight titles by beating Jose Ramirez in May of 2021. The Scotsman is slated to defend for the first time in his home country in late February.

Prograis appears to have recovered from a scary accident on an all-terrain vehicle (ATV), while on vacation in Mexico earlier this month. As we wrote, Prograis admitted on a social media video that he was thrown from the vehicle and that he hit his head on the payment, while luckily having a helmet on to save him from a worse situation with the impact.

He will now battle the Irishman McKenna, who won his last bout in Belfast, Northern Ireland defeating Jose Felix by decision in August.

For his part, Prograis posted a somewhat comical video on social media about what he plans to do to in the matchup with McKenna here,

It’s official!!!
March 19th in Dubai
I’m gonna beat the piss out of the unabomber for talking shit pic.twitter.com/vdbk88Bx3o

Probellum has yet to confirm a television partner in the U.S. for the March show in Dubai.