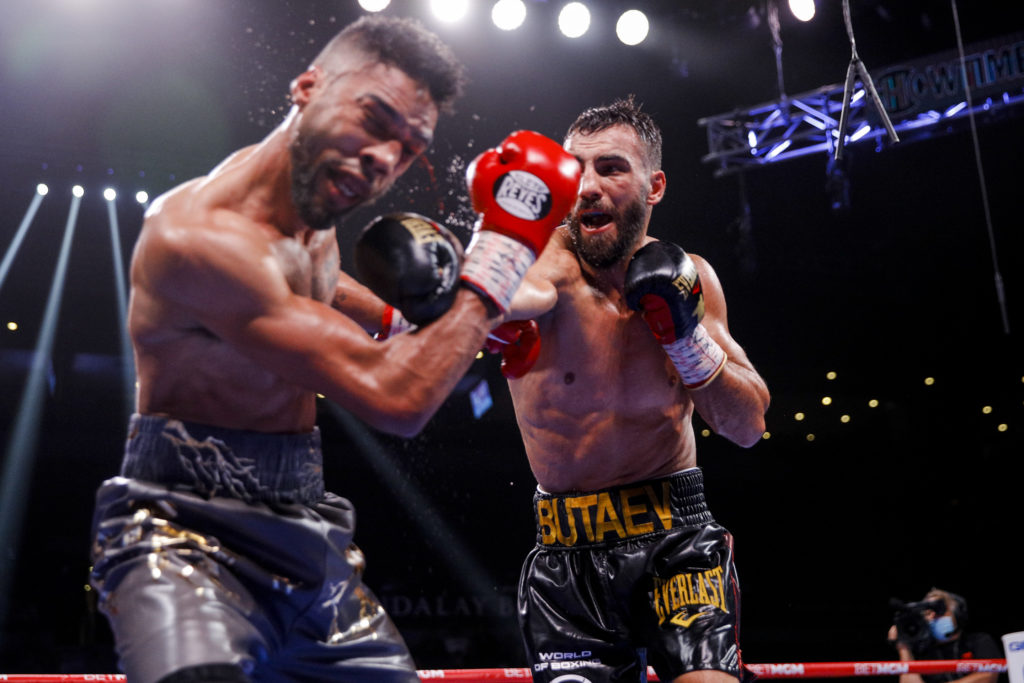 Jamal James before the fight had spoken of plans of getting revenge on Yordenis Ugas. You can add Radzhab Butaev to that list as well as he battered him on his way to a ninth-round stoppage win to close out the Showtime broadcast from the Michelob Arena at the Mandalay Bay Resort & Casino in Las Vegas.

The official time of the stoppage was 2:12 of the ninth round as the referee Celestino Ruiz had seen enough as James wasn’t doing anything to justify the fight to keep it going and waved it over. With the win, Butaev is now the new WBA “Regular” Champion as the sanctioning body snails to the finish line of eliminating belts.

But the fight once the bell rang was one that had James firing on all cylinders early. A pretty action-packed fight that actually took a turn near the end of the second round when Butaev began attacking the body of James. From that point forward, Butaev controlled the pace in the fight.

In the fifth round after numerous warnings, Butaev has deducted a point for punches to the back of the head. This would become moot as he won the fight but it was interesting to note that one judge, Patricia Morse had the fight in favor of James 77-76 at the time of the stoppage.

“This is very important for me,” said Butaev (14-0, 11 KOs). “It’s a big first step. It’s always been my dream to become a world champion. I took the first step today and I’m very happy.”

The stoppage came abrupt in the ninth round and felt by the broadcast and many watching a little pre-mature. Steve Kim over at SNAC.com and The 3 Knockdown Rule Podcast tweeted out that James was taken to the hospital after the fight. In that ninth round, James wasn’t showing much in return and was a bloodied and batered fighter from the attack of Butaev.

Im speaking to Joel Diaz now(the trainer of Butaev), he tells me Jamal James was taken to the hospital after the fight for observation. Puts a new perspective on the stoppage.. #boxing

“I have nothing against the refs’ decision,” Buatev noted.” I like to have a back and forth fight and I don’t like it be stopped. I have an exciting style. He saw it the way he saw it. I have no problem with the stoppage.”

What is next up for Buatev is barring things stay in place is a shot at the winner of Yordenis Ugas and Eimantas Stanionis. We’ll know more about when and were that fight takes place sometime before the end the year.