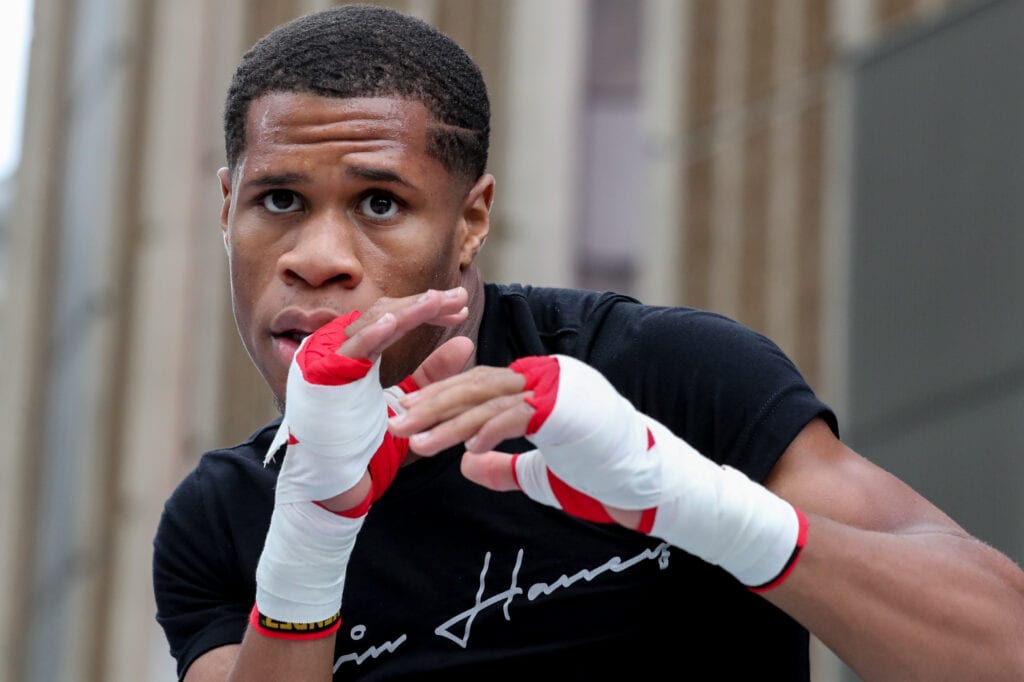 It was made known that WBC Lightweight champion Devin Haney will be in action on April 3. The question now begins against who?

For all of the new crop of “Four Kings,” talk can be erased for the time being; however, as Matchroom Boxing promoter Eddie Hearn speaking with Ak and Barak on Sirius XM this week, throw out the possibility of it being Jorge Linares.

“For Devin, the plan is still to get out in April,” Hearn told co-hosts Barak Bess and Akin Reyes during a show that streams weekdays on DAZN and SiriusXM. “You know, if Ryan Garcia won’t fight him, the next guy in line is Javier Fortuna.

I’m hearing rumors that maybe Ryan Garcia might fight Javier Fortuna. If that’s the case, I’d love the Jorge Linares fight for Devin Haney, quite frankly. I think that’s a really good fight. You know, I think if we can’t get one of the other champions or Ryan Garcia, Linares is like the next credible guy. You know, I don’t think there’s anyone that could be disappointed with Haney against Linares. I think it’s by far the biggest test of his career so far.”

So how did we get from Haney having to have his two mandatory opponents in Ryan Garcia and Javier Fortuna?

Well, the idea of Garcia taking on Fortuna rumors came confirmed when Sampson Lewkowicz, Fortuna’s promoter, told BoxingScene.com that he is ready for either Haney or Garcia.

If that match does end up happening, that will leave Haney the odd one out as it makes Linares the next best name to challenge.

Golden Boy Promotions VP and Matchmaker Roberto Diaz welcomed the challenge running down the success that Linares has had when taking on fighters from his stable, responding to the story in Boxingscene in a tweet.

??? @EddieHearn you really want Linares to get you again? 5-0 Mitchell, Crolla X2, Campbell and now @Realdevinhaney let's go, let's do it. Send over the contract @JorgeLinares is ready to win again @GoldenBoyBoxing @MatchroomBoxing @WBCBoxing @wbcmoro @DAZNBoxing ???

Also worth noting that 5-0 that Diaz was talking about, all where Linares retained or won titles from fighters under the Matchroom banner.

Linares has had a contest since the pandemic waived off and was supposed to face Fortuna for the WBC lightweight title, but a loophole reinstated Haney back the belt. Haney has since then been ordered to face both Garcia and Fortuna.

Linares posted on his social media that he is training and will have an announcement soon, who will it be against will all find out soon.