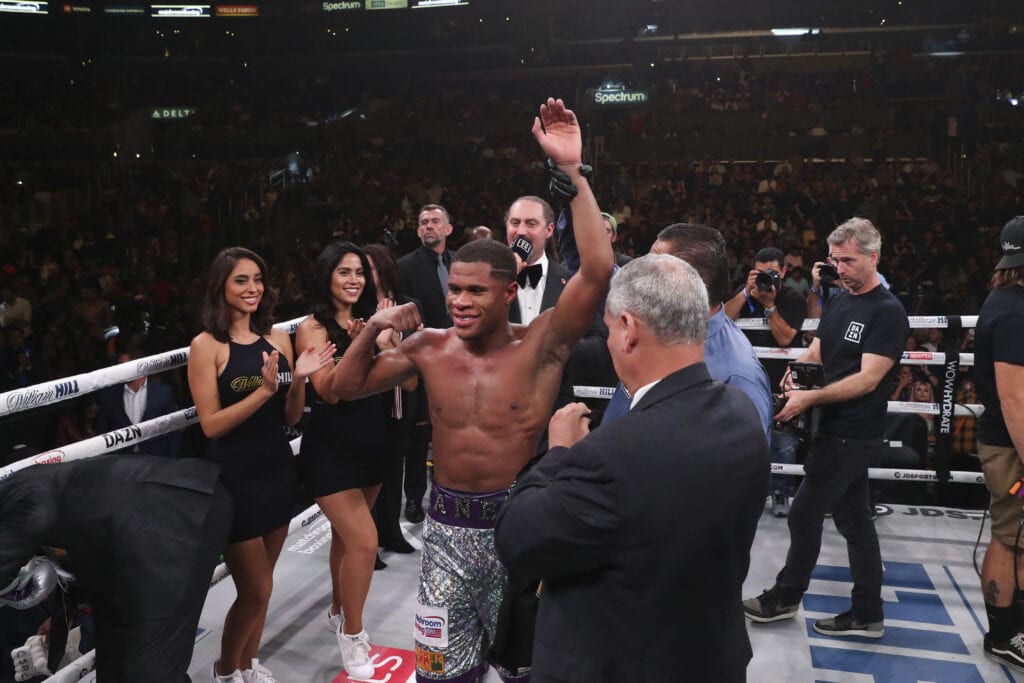 Undefeated lightweight Devin Haney got the boxing equivalent of socks from grandma this holiday season as he steps in the ring in 2021.

Not one, but two mandatory bouts from the World Boxing Council (WBC).

Jake Donovan of Boxingscene wrote that WBC President Mauricio Sulaiman mentioned that Haney (25-0, 15 KOs) would get the winner of this weekend’s title eliminator of Ryan Garcia and Luke Campbell, as well as long-awaited mandatory challenger Javier Fortuna.

“The lightweight division, the mandatory contender for Devin Haney, is the winner of Ryan Garcia vs. Luke Campbell,” Sulaiman said s during a virtual roundtable on Tuesday. “Because he won a vacant championship, he also has a second mandatory… which is Javier Fortuna.

“Fortuna was going to fight [former three-division titlist Jorge] Linares [in August], but Linares tested positive for COVID. Fortuna remains, and the two mandatories for Haney are the winner of Ryan Garcia-Luke Campbell, and Javier Fortuna is the second mandatory.

2021 will be a huge year for me starting with my two mandatories ?

I wish I could make all of this make sense. Still, it seems that the WBC in the lightweight division is now focusing on Haney being the champion despite the contest which Teofemo Lopez won over Vasiliy Lomachenko in October being for the “Franchise” Designation. Haney has the physical WBC championship belt and will now have at least two matchups for it.

So how did we get this mess?

Part of the merry-go-round is because Haney had shoulder surgery back after his win last December against Alfredo Santiago. That surgery stopped the mandatory defense against Fortuna, who was next up in line to challenge Haney. Fortuna was supposed to fight for the vacated belt against Luke Campbell, but the pandemic wiped that contest. During the pandemic, Haney was reinstated back as WBC champion. Long story short, the WBC held Haney’s spot in line.

Haney was last seen in action in a one-sided decision against Yurkois Gamboa in November and called out the big names at 135, such as Grvonta Davis, Teofemo Lopez, and Ryan Garcia. Should Garcia win against Campbell, Haney will get a shot at him, at least in what would be one of the more anticipated bouts in 2021.