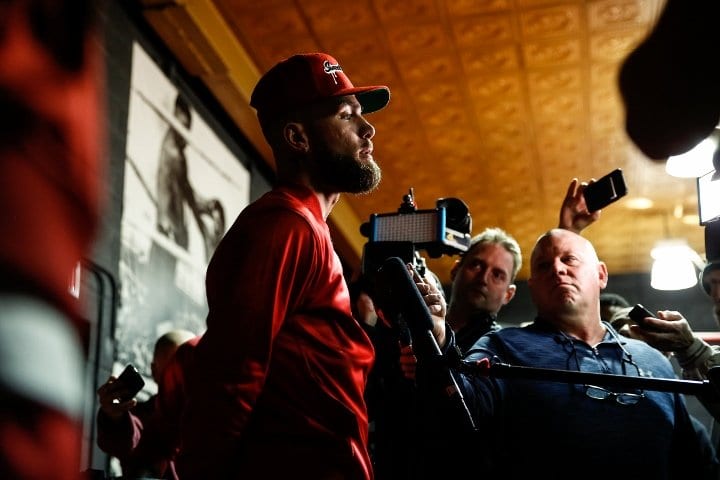 Undefeated IBF Super Middleweight Champion Caleb “Sweethands” Plant and mandatory challenger Vincent Feigenbutz participated in a media workout in Nashville Wednesday before they square off this Saturday, February 15 at Bridgestone Arena in Nashville, Tennessee in the FOX PBC Fight Night main event and on FOX Deportes.

The Ashland City, Tennessee native Plant greeted fans in attendance before he makes the second defense of his 168-pound title in a homecoming attraction, as he fights in his home state for the first time as a pro. Fighting out of his native Germany, Feigenbutz will be making his U.S. debut and hoping to spoil Plant’s homecoming in the “Music City”.

Here is what the main event fighters had to say Wednesday from Music City Boxing Gym in Nashville:

.@PBConFOX fighters worked out for the media today in Nashville, TN in advance of their Saturday night bouts at @BrdgstoneArena. #PlantFeigenbutz / #DulayMagdaleno

“I’m excited about fighting in my hometown. This is something that I’ve wanted to do since I turned pro. To be coming back home as a world champion at Bridgestone Arena is exciting and motivating. I’m ready.

“I know that Feigenbutz has a lot of fights and a lot of knockouts. He’s coming in here to spoil my plans, but he’s going to fall short.

“I’m excited but I’m not really focused on anything but the fight. I’m happy to be here in Nashville in front of my home crowd. This is something that I pushed for, but once I got it, there’s no reason to really focus on it. I have to treat this like another day at work.

“I’ve worked very hard for this moment over many years. There was a point in time when there were no cameras in front of me. It was just me and my small team, that’s grown into a big team. Now we’re on the big stage and we’re prepared.

“My father (co-trainer Richie Plant) has always instilled in me that anything you’re not willing to do, there’s someone out there who is. I’m a fierce competitor and just like I don’t want to lose in boxing, if somebody is working harder than me, I’m losing in that area too.

“Preparation for this fight was great and I’m feeling good right now. I’m rested and relaxed. All the hard work is done. I can’t get in any better shape. At this point, you’ve put the work in or you haven’t.

“It’s not hard for me to stay hungry. People say I’m the hunted now, not the hunter. But I still feel like I’m hunting. It was just one goal to become a world champion. The other goals and aspirations that I have, those are what keeps me motivated.

“I’m ready to have a great performance Saturday in front of my hometown fans. This is going to be fireworks and you’re not going to want to miss it.”

“I will win this fight anywhere it’s fought. I’m very happy to be here in the U.S. on this big stage. I have a great team that got me here. If the American people give me a chance, they’re going to like what I bring into the ring. I don’t like to talk too much, but I like to fight.

“I was only 20-years-old when I last lost. I’m a man now and I’m much more experienced and have everything I’ll need to beat Caleb Plant.

“We’ve had great preparation for this fight like always. I’ve of course looked at Caleb’s fights and we got sparring partners to match his style. We’re going to be ready for fight night.

“You’ll see in the first round that I’m prepared. I’m going to bring something different than Caleb expects. I’m confident that I’m going to win this fight, or else I wouldn’t be here.

“We’re all very excited to be here in Nashville. My whole family loves Johnny Cash and all the music here. The people are very nice and I’m looking forward to winning a world title here.

“In the future I’d love to come back and fight in the U.S. I’m planning to put on a good performance and I know that will open up the door to the biggest fights in the sport.”