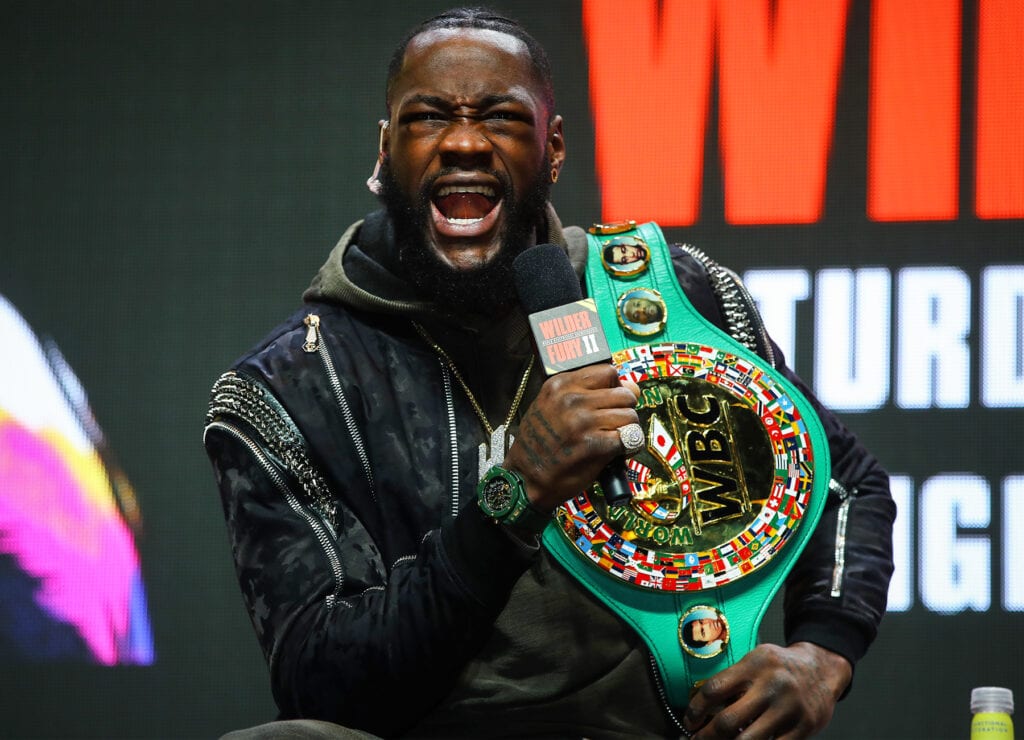 Former WBC heavyweight champ Deontay “Bronze Bomber” Wilder is headed back in the ring for the first time in 2022. This, as Premier Boxing Champions confirmed Wednesday afternoon that Wilder will battle fellow contender Robert Helenius in Brooklyn’s Barclays Center on October 15h.

PBC made the announcement online that Wilder-Helenius will also be a PPV from Fox Sports,

#BombZquad is BACK! Former heavyweight champ @BronzeBomber makes his highly-anticipated return to the ring to battle Finland's @helenius_robert on October 15, live on @PBConFOX PPV from @barclayscenter!#WilderHelenius pic.twitter.com/nAUx0w19nH

“Wilder will take on top-rated “Nordic Nightmare” Helenius in an explosive 12-round WBC Heavyweight Title Eliminator between ferocious punchers in the main event of a FOX Sports PBC Pay-Per-View Saturday, Oct. 15 at Barclays Center in Brooklyn in a Premier Boxing Champions event.

One of the greatest knockout artists in boxing history, Wilder (42-2-1, 41 KOs) is on a mission to become a two-time world heavyweight champion following a first reign that included 10 title defenses, a feat accomplished by only seven heavyweights in boxing history. The “Bronze Bomber” now returns to Barclays Center, a venue where he has fought four times and thrilled the crowd with some of his most spectacular knockouts. The 36-year-old slugger from Tuscaloosa, Alabama earned his moniker by winning bronze at the 2008 Olympics.

He rejuvenated the heavyweight division when he captured the WBC belt in January 2015, becoming one of boxing’s biggest stars with an all-time heavyweight best 91.1% knockout percentage and a captivating personality to match. Coming off an epic trilogy with Tyson Fury, Wilder remains must-see television and one of the greatest fighters of this era.

“It’s been a long journey for me and as of today it continues. I thought so many times about whether I should stay out of the business or come back,’’ said Wilder. “Once I got my statue in my hometown and saw so many people arrive and celebrate with me and my family, to see all the emotions, grown men crying in front of their children and saying he is a real true king, made me feel like my job is not done.”

“So, here I am once again, looking forward to returning to the ring. I am looking forward to coming to Barclays Center, a place where I have had my most devastating knockouts and a place I consider my second home. So where all my Bombzquad people at? It’s time to put on your war gear. And let’s go to work, baby. Bombzquad is back!”

Helenius (30-3, 19 KOs) stamped himself as one of the world’s best heavyweights with consecutive stoppage wins over the previously unbeaten Adam Kownacki, including an October 2021 sixth-round TKO win over Kownacki in Helenius’ last outing. Born in Sweden and fighting out of Mariehamn, Finland, Helenius established himself as one of Europe’s top heavyweights prior to making his U.S. debut in 2019. The 38-year-old “Nordic Nightmare” has won six of his last seven bouts.

“It’s great to be back at Barclays Center in an even bigger fight than my last one. I’ve been waiting for this opportunity for a long time and I’m going to be ready,’’ said Helenius. “I’m going to produce an even bigger upset than I did with Kownacki. I’m going for the belt, so this is a fight to prepare me to achieve that goal. I can only become the best heavyweight in the world by beating the best and that’s what I intend to do on October 15.’’

As the release mentions, the two fighters are currently headed in opposite directions. This, as Wilder was beaten decisively and stopped twice by WBC champ Tyson Fury, including an 11th round TKO last October in Las Vegas. And the second of Helenius’ two TKOs of Kownacki came on the Fury-Wilder III undercard that night.

So, it won’t be an easy fight for Wilder, who defended his WBC title nine previous times before the Fury losses, in his return.