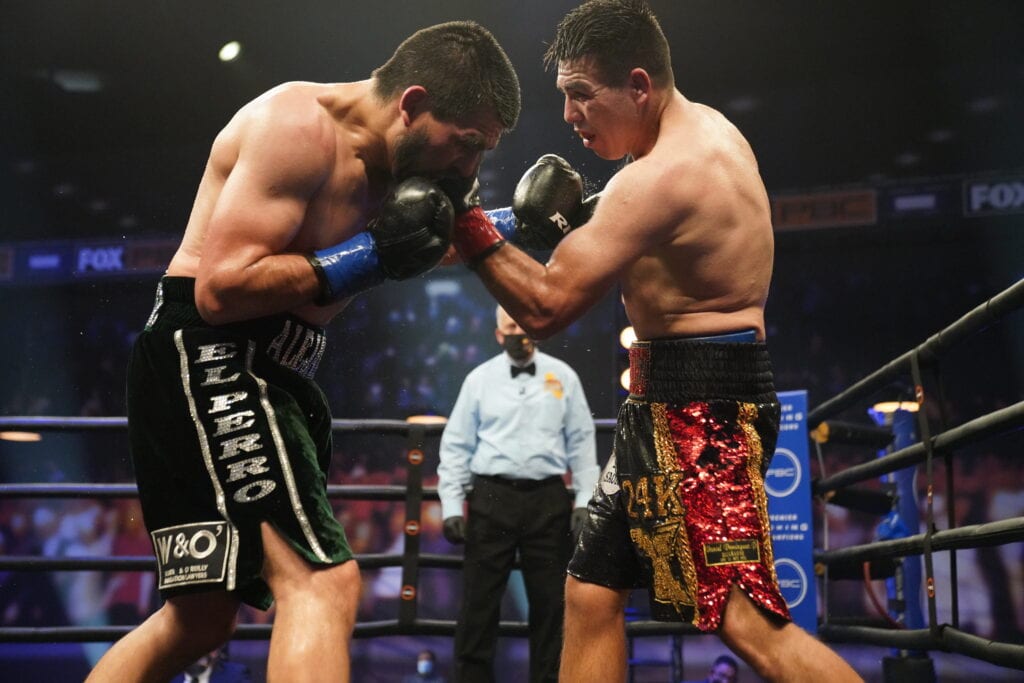 As if his Saturday night dominant, 10 round unanimous decision performance on just a day and a half notice wasn’t wild enough, journeyman Super Middleweight, Vladimir Hernandez, was part of a record-setting punching night.

First, the Mexican born now living in Denver Hernandez only accepted the fight on Friday afternoon against IBF Contender Alfredo Angulo. That’s because Angulo’s original opponent, Caleb Truax, was suffering from dehydration and unable to fight.

But, undaunted, Hernandez, 12-4, 6 KOs, out-slugged and out willed Angulo, now 26-8, from the opening bell on the “PBC on Fox” show in L.A. And, he scored an impressive 10-round decision that “threw a wrench” into Angulo’s hopes of winning and getting a title shot with IBF World Champ, Caleb Plant.

Then, shortly after it was done, came word that both fighters had participated in the greatest punch output 168 lb. fight on record from Compubox stats,

Amazingly, it showed that both fighters fired over a thousand punches, which is remarkable output. Then, you consider they did so in a 10-round battle.

That’s when Compubox’s Dan Canobbio, a recent guest on the Big Fight Weekend podcast, chimed in on just how astounding those punching outputs were compared to any other super middleweight fight on record (even 12 rounders)

This got lost in the sauce last night: Alfredo Angulo and Vladimir Hernandez set a new Super Middleweight world record with a combined 2,137 punches thrown — and they did it in only 10 rounds.

Even though Angulo landed more cumlative punches overall and more power punches in total, Hernandez scored what seemed like the more significant shots, especially in the first five rounds. This while he built up a significant lead on all the scorecards.

Hernandez, who hasn’t received much notoriety, other than being one of the knockout loss opponents for up-and-coming Ubekistan, unbeaten 168-pound contender Israil Madrimov in 2018, is getting well deserved notoriety, now, for this upset.

And, probably plenty of ice for his hands and arms and rest in the aftermath of his decision win.

And, it opens up the possibility that Hernandez may get a rematch with Angulo or could be fighting Truax, who needs to get back in the 168 lb. conversation, himself.

Ricky Medina sparring in Vegas
Jamshid Nazari signs with Dragon Fire
Advertisement
To Top
We use cookies to ensure that we give you the best experience on our website. If you continue to use this site we will assume that you are happy with it.OkPrivacy policy