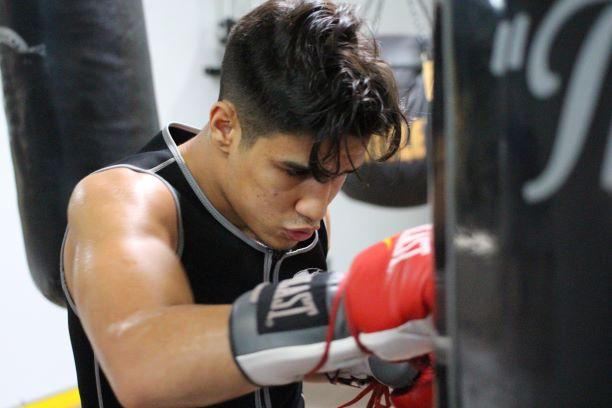 Undefeated featherweight sensation, Ricky “El Castigo” Medina (7-0, 6 KOs), spent this past week in Las Vegas, NV, sparring with top-level fighters. Medina shared the ring with Diego Magdaleno (32-3, 13 KOs), as well as other top prospects training in the boxing capital of the world.

“I wanted to experience what it was like to train and spar in Las Vegas,” said Ricky Medina, who resides in San Antonio, TX. “In every gym that we entered, there was either a current or past world champion getting ready to work out. I got to meet Floyd Mayweather and Tank Davis. In addition, got some good tips from Bones Adams and Jorge Capetillo. Sparring with Magdaleno was great work. I can see myself holding training camps out there in the future.”

“The experience Medina got while sparring in Las Vegas is going to give him extra confidence as he takes his career to the next level.” said Greg Hannely, CEO of Prince Ranch Boxing. “He’s already a very confident fighter so this sparring tour will only enhance his game. I’m happy that he was able to share the ring with some great fighters.”

“Ricky Medina did really well with everyone he sparred,” said Rick Morones of TMB Entertainment, Medina’s promoter. “Las Vegas is where all the top sparring is at and I’m glad we got to get that work. Everyone was very nice, and Floyd Mayweather had some inspiring words in regard to Medina’s talent. about Median. I want to thank Greg Hannley and Bones Adams for letting us train at the Prince Ranch Boxing Gym.

Medina’s experience training with other fighters a lot are doing now. For instance, we spoke with Malik Hawkins about his training out with the world champions out in Omaha and stated to us that the experience was eye-opening.