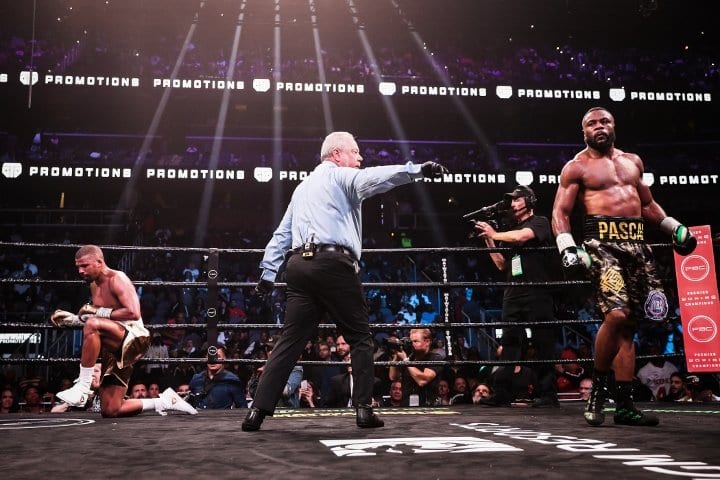 The State Farm Center co-main main event that aired on Showtime Saturday night was a fun one as  Jean Pascal retains against Badou Jack in a close fight Saturday night to keep his WBA Light Heavyweight belt.

The judges had it 114-112 Jack and  114-112 twice for Pascal much to the dismay of the anti-Candian crowd here in Atlanta. This bout was the one that preceded the main event of Gervinta Davis taking on Yuriorkis Gamboa on Showtime.

It started with Pascal firing on all cylinders. Mixing up shots and sticking behind the jab.

The was almost a knockdown in the second round when Jack loaded up for a shot a missed, which caused him to get hung up on the ropes.

Pascal made the first turn of the fight with a  hard right, wobbled Jack as it hit on the ear, which led to a knockdown. Jack beat the count but seemed to effectively be saved by the bell to end the fourth round.

Pascal drops Jack in the 4th!

The ninth round was back to what worked for Pascal early on, which was sticking to the body, but Jack was firing back as well as landing counter body shots of this own. This fight not only had toe to toe action, but it may also have snuck in last minute on all of those “Fight of the Year” polls that have been going around to close out 2019.

The championship rounds did slow up on the action, either. Pascal was sent down early in the twelfth round by Jack from a right that saw him fall alongside the ropes. Pascal beat the count, but Jack was seizing the opportunity by thoroughly applying, but Pascal was able to hang on until the final bell.

“I was the better fighter,” Pascal said after the fight.

“Anytime” Pascal said when asked about a rematch with Jack after the decision.

This match was a great fight, and I’d like to see this one ran back again in 2020.

How long will Davis be at 135?
Davis stops Gamboa in hometown bout
Advertisement
To Top