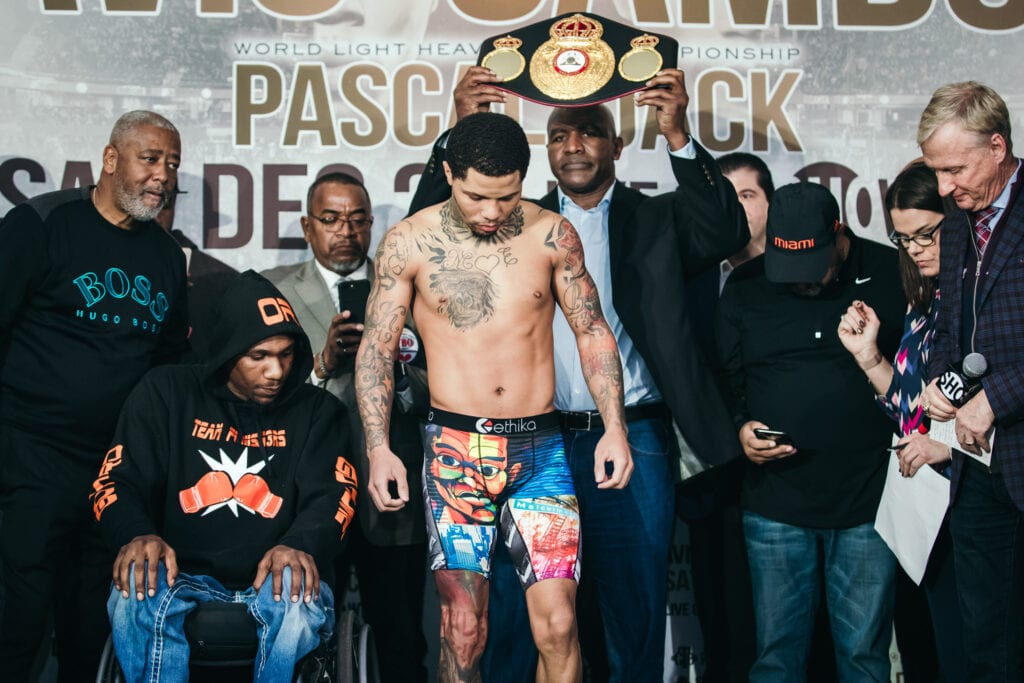 Gervonta Davis will make his pro debut at lightweight against former champion Yurikois Gamboa in Atlanta Saturday night, and the first question that everyone in the boxing community that will surface is easy. How long will Davis be at 135?

Yesterday at Friday’s weigh-in when he came in initially overweight as T.J. Rives wrote yesterday isn’t going to shake that cloud either. Amid the fighters respective camps and entourages shoving while Davis and Gamboa at the stare-off of that circus was the 2-hour weight that took place as Davis came in at 136.2 lbs. That 1.2 lb was later drooped, and he came in at 134.5 to be eligible for the WBA “regular” title left behind when Robert Easter and Rances Barthelemy fought to a draw for it earlier in the year.

History will be made today, I can’t wait. Let’s go! #TheONE pic.twitter.com/ryNrLHAYEW

“We were surprised Tank didn’t make the weight the first time,” Ellerbe, CEO for Mayweather Promotions, told BoxingScene.com. “It’s disappointing, but sometimes things like this happen. We don’t condone it. We’ll be criticized for it, but we understand that comes with the territory.”

Anyone who was on social media yesterday had their weight joke and punchline yesterday about Davis lost weight. Full disclosure as I’m in Atlanta for the fight had one like the rest of the goons on the internet.

I'm letting everyone know now. I'll be in town tonight and am DEFINITELY not making weight.#DavisGamboa #boxing

This honestly for Davis with weight becoming an issue is a little troubling but even at lightweight as he is a huge favorite against the now 38-year-old Gamboa only questions, who is next for him if he is victorious tonight at the State Farm Arena. The other belt holders at lightweight are at rival promotions, and the WBC recently franchised the WBA “Super” champion Vasyl Lomachenko. That designation would help side-step any upcoming mandatory of the winner of the main event to close out Showtime.

The atmosphere for this fight is vast in what should be a fascinating card to close out the boxing year. Davis and the reports when he was over on the scale took precedents the same day that the most significant heavyweight rematch was announced in the morning between Deontay Wilder and Tyson Fury. Like or hate Davis, the fact that he is a draw and is going to be one to keep an eye out for.

“It’s time to quit calling Gervonta a young star or a rising star because what he has demonstrated this year is that he’s a bonafide star. That is without question when you go into three cities and bring out all the people that he has,” said Showtime President of Sports & Events Programming at the final press conference.

Whenever this is just a stepping block for Davis as the undefeated 25-year-old gets more prominent and larger than life in and out the ring, it’s is worth keeping an eye out on as he goes for a title tonight.