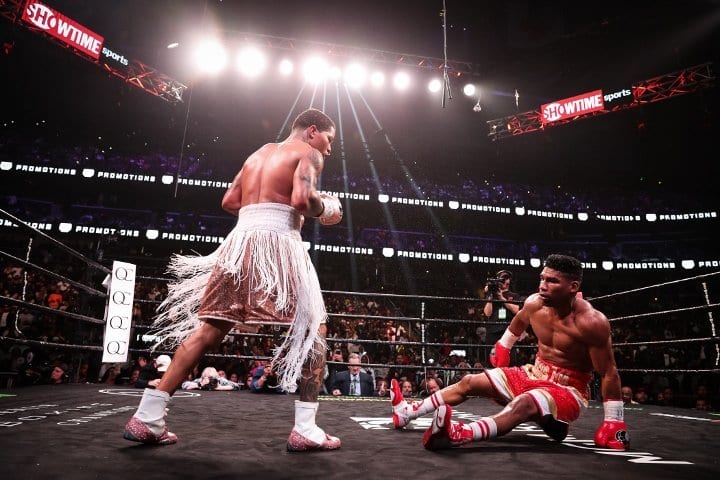 Gervonta Davis looked to shine in his new hometown of Atlanta, Georgia, and in front of 14,129 fans he did just that, stopping former unified champion  Yuriorkis Gamboa in the final round to become the new WBA “Regular” Champion at lightweight.

This main event that aired on Showtime was capped off with a stoppage in the twelfth round to extend Davis’ knockout streak to 15 and to remain undefeated.

Davis knocked down Gamboa three times in the bout, finally halting after the final one in the twelfth round.

Gamboa was knocked down in the second round and from there spent the rest of the round in self-defense, as Davis was looking to close the show. The start of the third round was weird when Gamboa thought he had hurt his Achilles but was able to move around and continue as it was just a faulty shoe.

Davis was the huge favorite in this one despite the issues of coming in initially overweight on the first try at the weigh-in Friday, Once the bell rang Saturday night, none of that mattered. And, once the fifth round came, it was all Davis landing hard rights that seemingly didn’t miss. Sitting on press row, you could see that Davis was beginning to tee off on the 38-year-old Gamboa, who seemed to be a step behind the entire round.

However, the one thing that Gamboa was able to do to keep this fight going was slow it down. Still, Davis was not only throwing more shots, but he was also landing them as well.

As the seventh round unfolded, Gamboa was still game in this one, having his best success landing a few punches. Gamboa was knocked down hard again in the final moments of the eighth round with a flush left to the head, but again, got up and was saved by the bell.

The ninth started with what looked like more of the same with ringside physicians and referee Jack Reiss paying close attention to Gamboa. Davis was still landing hard shots that seemed to have Gamboa on weary legs. The fight was finally stopped with a knockdown of Gamboa with a straight left at 1:17  of the final round.

Davis is the new champion at 135 for the WBA “regular belt.” We’ll see where he goes from here or if he stays at lightweight to defend this title.

Pascal retains in close fight against Jack
Gamboa fought on against Davis with injured Achilles
Advertisement
To Top
We use cookies to ensure that we give you the best experience on our website. If you continue to use this site we will assume that you are happy with it.Ok