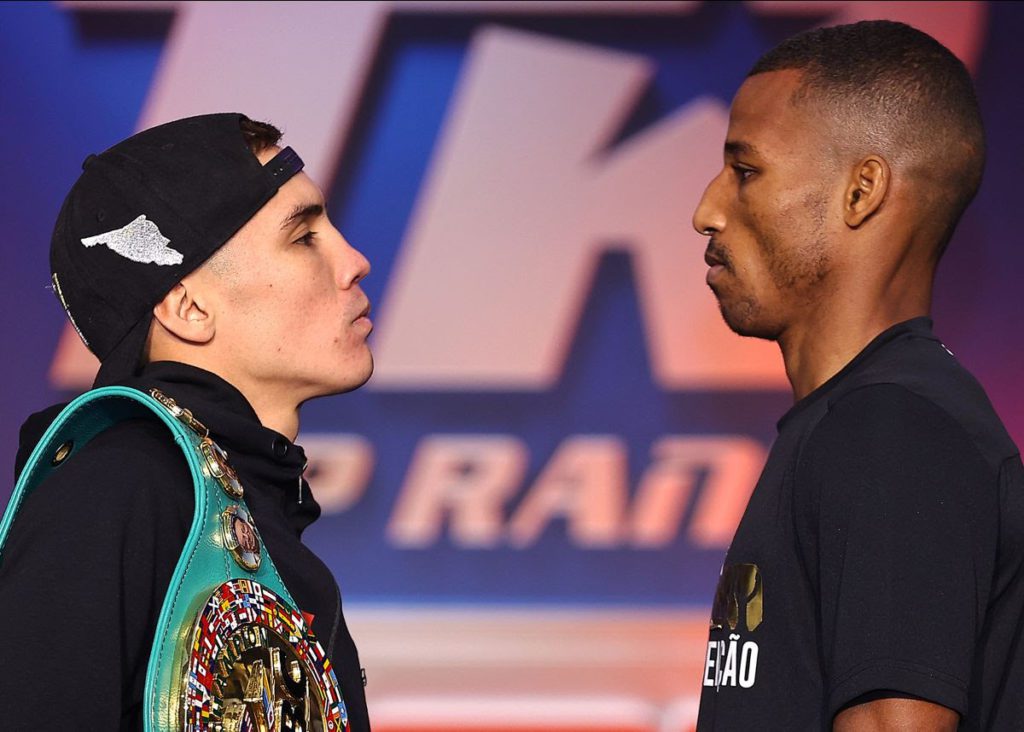 WBC junior lightweight champion Oscar Valdez has one thing on his mind, and that is Brazilian Olympic gold medalist Robson Conceicao (16-0, 8 KOs) on Friday evening at the AVA Amphitheater at Casino Del Sol in Tucson. Conceicao defeated Valdez by one point in the 2009 Pan American Games finals, so the amateur rivals have a professional score to settle.

A sold-out venue will welcome him as Michelle “Raging Babe” Rosado was helping to promote the event informed social media Thursday that event at the Casino Del Sol in Tucson, Arizona, was sold out.

Check out our latest episode of the Big Fight Weekend Podcast with this week’s guest Keith Idec from Boxingscene.com, breaking down the controversy around this fight and more!

Valdez (29-0, 23 KOs) gets to make his first title defense of the belt he won earlier in the year from Miguel Berchelt in a hometown bout that didn’t receive much buzz or attention until a failed drug test by Valdez popped up. What resulted from that test and the carnival surrounding it is a fight that will still take place Friday night streaming on ESPN+. For that, Valdez is thankful.

“I feel blessed that I get the chance to step in the ring on September 10. I’m very grateful to Top Rank, the Pascua Yaqui {Tribal Gaming Commission} for letting this fight proceed, and I’ve just been very concentrated. Coming here to my second home in Tucson means a lot to me,” Valdez said at the final press conference Wednesday.

“People know my last two fights were without a crowd due to COVID, and what better way to come back as a champion than in front of my people with all of Sonora and Arizona here? I’m just excited. I’ve been very focused on not looking at anything negative out there. It has been a little difficult — I can’t lie — but this is what we have to go through. This is what it’s going to be.”

Why Conceicao? Well, this is a grudge match from when these two faced off at the 2009 Pan American games, which Conceicao won by a narrow decision. Valdez remembers.

“{Our amateur bout} was a back-and-forth fight, but I lost. I always took my losses very seriously. Everybody hates losing, and I’m one of them. I’m a sore loser. Now that I get the chance to fight him as a professional, I’m taking this fight very seriously like all the fights. I’m defending my title, and I’m going to do whatever it takes and whatever I got to defend my title and avenge my loss,” Valdez said.

That narrow decision isn’t reflected in the sportsbooks as he is the big underdog in this one, and that is easily based on the fact that Valdez has the better fight resume. As I mentioned on this week’s podcast, I’d stick with the hometown guy for this one despite what should be a spirited broadcast on ESPN.

Some folks were asking Tim Bradley to step away from the Valdez-Conceicao broadcast… here’s what he had to say about that idea pic.twitter.com/0g3zWeNpdU

In case you haven’t been listening, analyst Tim Bradley isn’t the biggest fan of Valdez and the thought of this fight. While he isn’t the only one, he is one of the lucky ones to call this fight on The Plus. Even if the main event has you feeling bitter, the undercard is a good one, with Junto Nakatani making a WBO flyweight defense against Angel Acosta, which should easily steal the show. Also, Gabriel Flores Jr. is in a big step-up fight against Luis Alberto Lopez in a lightweight contest.