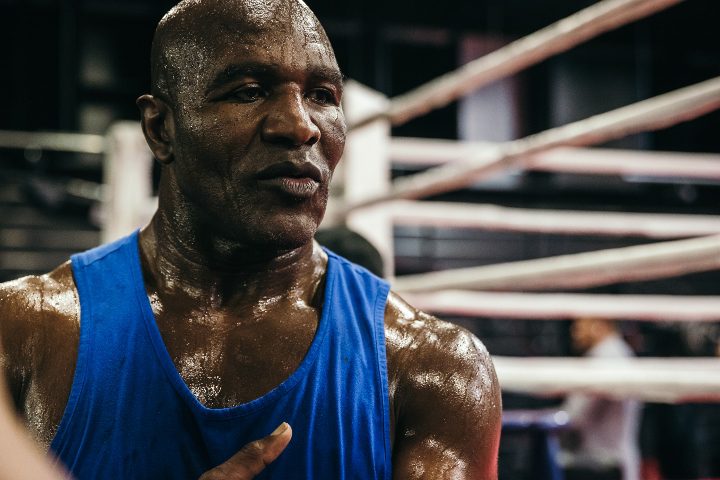 What To Expect Out Of Holyfield-Belfort

If you expect me to sit here and give you a breakdown of Evander Holyfield and Vitor Belfort, you may have to look elsewhere cause this, isn’t it. Don’t let the headline fool you.

What this is on Saturday night from the Hard Rock Casino and Hotel from Hollywood, Florida, is more of an indictment of a fight card put on by Triller that, honestly, I’m glad at least it’s happening for their sake. Having said that, I can’t sit here and tell you with your money to spend 50 dollars on this, but in 2021, if you want to REALLY WATCH THIS, something tells me you already know-how.

Check out our latest Big Fight Weekend Podcast, where we talk about this event and more with guest Keith Idec of Boxingscene.

So however you are watching this card Saturday night, I present to you what to expect.

Whose calling the fight? I read that Jim Lampley is making his return?

Legendary broadcaster Jim Lampley was slated to call this fight card but decided to opt out this week due to the location change from Los Angeles to Florida.  I’m assuming he knew about the same time everyone else did about Oscar De La Hoya having to pull out of this fight and being replaced with Evander Holyfield. In place of Lampley will be Ray Flores who has been there all week covering all the prefight conversations and events.

Also, former President Donald Trump and his son Trump Jr. will be on hand during the broadcast.

“I love great fighters and great fights. I look forward to seeing both this Saturday night and sharing my thoughts ringside. You won’t want to miss this special event,” said Trump was quoted as saying by the platform in a press release.

But he’s calling a fight against the same Mike Tyson bit his ear, Holyfield? Isn’t he like 60?

He’s 58, and it is definitely the same Holyfield and reminded everyone at the final press conference Thursday that he’s been waiting two years for a chance to get back into the ring. Originally to take on Tyson, which eventually went instead to Roy Jones.

“I’m not in MMA where I’ll know he’ll hurt me. That’s why I’m boxing him,” Holyfield said at the final presser Thursday.

“It’s not so much that I miss it, but people always ask about Mike Tyson and I fighting. They’ve offered so much money that I would definitely take a chance against someone I’ve already beat.”

The only problem with that is that Tyson and Triller had a falling out, and the fight Holyfield scheduled in June was for a card that never materialized.

Much has been made about the Hall of Famer getting back into the ring, and while I’m not a fan of it personally, this feels more like an obligation to Holyfield to avoid this whole arbitration thing that popped up earlier this month. Holyfield didn’t look like the man we saw beat Tyson twice in the media workout videos. Lucky for him, Belfort is 44, smaller, shorter, and also has had only one pro boxing fight back in 2006, which we won against Josemario Neves.

You can scout Belfort’s 2006 effort here as there is non-HD footage of the fight on Youtube. Belfort speaking at the final presser, has no problem with the size disadvantage.

“I’m not intimidated by the size. I enjoy it,” Belfort said.

What about the rest of this fight card? Is it any good?

In high-level championship boxing, not at all. This fight card does have Andy Vences and Jono Carroll facing off against each other in a crossroads-type fight. After that, you got former UFC legend, Anderson Silva, taking on Tito Ortiz in a boxing ring. If that doesn’t shock you then David Haye makes his return back to the United States taking on Joe Fournier in a heavyweight contest. The last time Haye was in the ring in the United States was back at the Playboy Mansion back in 2003 on a Jeff Lacy undercard.

That is the rest of the card of note.

All of this happens Saturday night. Hopefully, it is quick but helping in that is that the majority of this card is 8 rounders outside of Vences and Carroll, which is scheduled for 10.