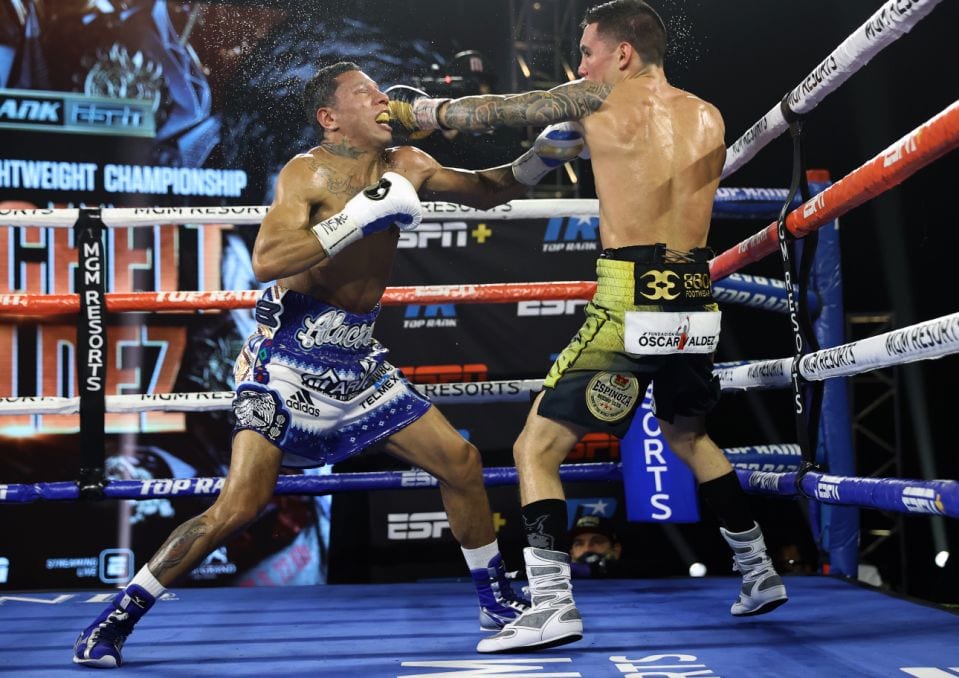 The celebration continues for newly crowned WBC Super Featherweight champ Oscar Valdez. Fresh off his eye-popping KO of longtime champ Miguel Berchelt in Las Vegas on Saturday night, Valdez has already had a parade in his hometown on Monday. And, on Tuesday, he received something that every world champ covets- a customized title belt.

Couriers from the World Boxing Council delivered the specialty made 130 lb. title belt to Valdez in his hometown of Nogales, Mexico located just across the south central Arizona border,

That smile says it all. #AndNew, now with the strap to match 🏆🇲🇽 @oscarvaldez56 pic.twitter.com/nCp39HStp2

You can clearly see the elation on the face of the 30 year old Valdez opening the case to get his own collector’s version of the WBC title that cements truly cements him as world title holder and one of the names to watch in the smaller weight classes.

The victory on Saturday night was televised nationwide in the U.S. on ESPN and the social media replays of the straight left KO of Berchelt has been seen hundreds of thousands of times in recent days.

Berchelt, now 37-2, laid motionless for over a minute face down and then was rolled on his back. Scarily, the ring side doctors and paramedics standing by did not seem to treat him with much urgency. Rather, the doctors continued to look at and talk to the former champ, eventually sitting him up.

He was eventually taken on stretcher to the ambulance outside the MGM Grand Convention Center and to a nearby hospital. Thankfully, the KO looked much worse than it turned out to be for Berchelt, as he was treated, evaluated and later released early Sunday.

The two Mexican-born fighters both laid it on the line, including Berchelt valiantly scoring some punches on the challenger.

Still, the ending was almost inevitable, as Valdez had scored a fourth round knockdown after landing a left hook to the right temple area of the champion’s head. That wobbled Berchelt and eventually, he was knocked into the ropes, where referee Russell Mora ruled a technical knockdown due to only ropes holding him off the canvas.

Valdez, who also took part in a parade through the streets in Nogales Monday afternoon, is now clearly in the picture for a possible unification bout with WBO champ Jamel Herring (provided he ever fights/defeats Carl Frampton). Or, he could also end up in a battle with unbeaten, former WBO World Featherweight Champ, Shakur Stevenson.