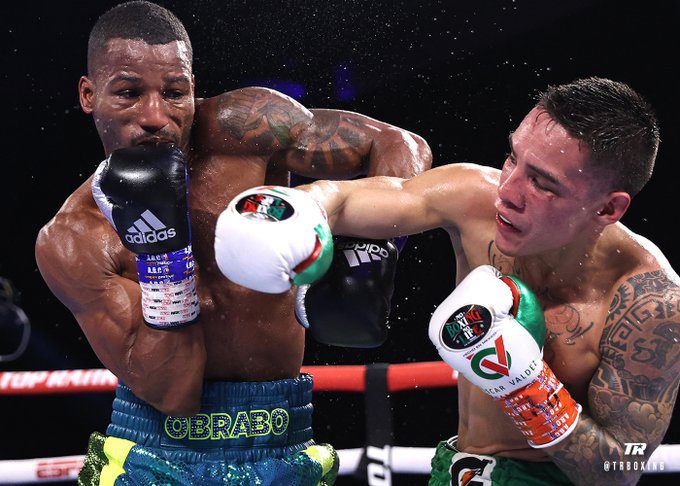 After what felt like a week of “much ado about nothing,” Oscar Valdez had a hometown bout and a tough one against Robson Conceicao, winning a unanimous decision to retain his WBC Featherweight title.

The judges scorecards had this fight 117-110 and 115-112 x 2 for Valdez in a fight that Conceicao looked in control but faded late.

The homecoming didn’t start off too hot, as Valdez was getting peppered early and often by Conceicao and it was apparent early on he was in for a tough bout. The broadcast made it a point on ESPN+ that the challenger Conceicao was looking to repeat what they did in their original meeting as amateurs back in 2009.

The third round was when Valdez made an adjustment and started to change the momentum of the fight here in front of a sold-out crowd of 4,545  at the AVA Amphitheater at Casino Del Sol in Tucson, Arizona. Despite that, Conceicao was able to maintain the distance and pace of the rounds in the early moments and as the crowd was chanting somewhat for Oscar, who was not looking like the same fighter that took on and won the title from Miguel Berchelt in February.

Conceicao started to get a little cocky in the ring and was soon greeted with a few punches, which started the crowd back into the contest. What looked like a fight he was cruising was finally met with some resistance and a few left hooks from Valdez.

The biggest question in this fight was: how much was the noise and scuttlebutt about Valdez’s failed drug test would have an effect on him in the ring? As it crossed over the halfway point of the fight, you could see that the movement that Conceicao had an advantage with earlier was slipping away. Conceicao went back to slow the fight down and Valdez n the eighth round took advantage of the slowing output of Conceicao with body shots that were looking to slow him down.

Conceicao was deducted a point in the ninth round by the referee for an intentional punch to the back of the head. At this point, the jab and move strategy of Conceicao was seen to be given rounds to Valdez as he was fading. The replay on the point deduction looked to be a little harsh and the looks of home cooking.

Conceicao caught Valdez napping in the tenth round and started to throw combinations, but Valdez was looking to land his overhand right and it was going to be interesting that Conceicao hadn’t gone past the tenth round before. As the final round of this fight began, you can see that some in Valdez’s corner, including camp teammate Canelo Alvarez, were concerned about Valdez retaining.

As the final round sounded and after a brief delay caused by water on the mat, it looked like that despite the point deduction and the broadcast seeing the fight in favor of Valdez, in the Conceicao had done enough to win this fight. Conceicao thought so, as well, as he began showboating to close out the fight.

Valdez gets by Conceicao but he was helped by a hometown crowd, a questionable game plan by Conceicao, and some crap referee work. Valdez next time out will have to be better than this.