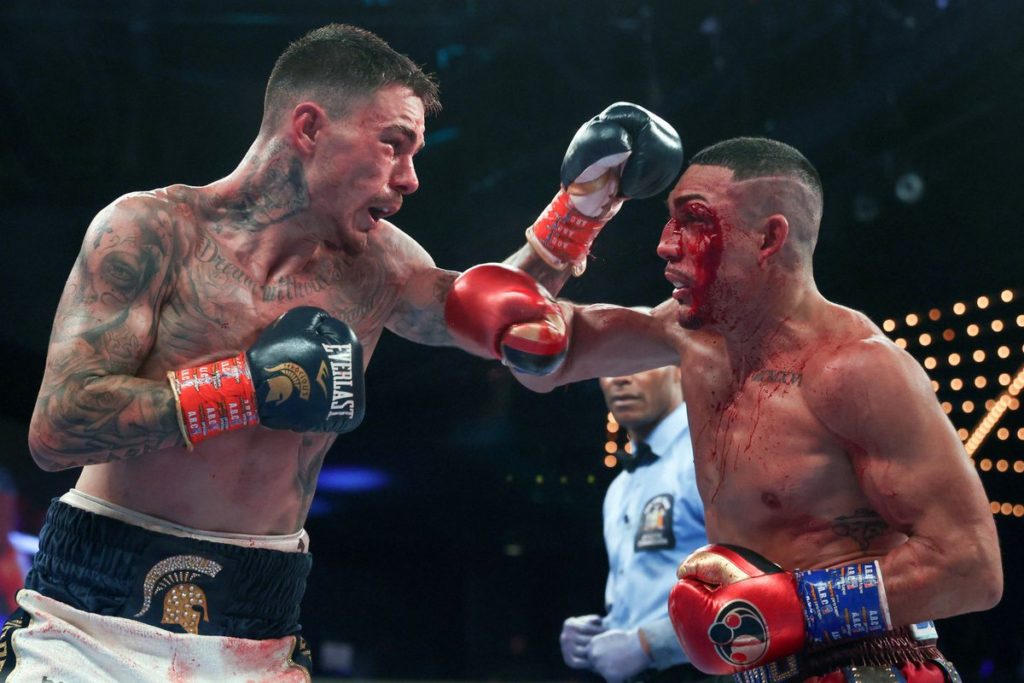 Off the thrilling Saturday night main event at the Hulu Theater at Madison Square Garden that saw Australian George Kambosos upset Undisputed Lightweight champion Teofimo Lopez, one question that fight fans and observers have been asking is: will we see it again?

Well, if you believe the outspoken father of the former champ, Teofimo Lopez Sr., a rematch won’t be happening anytime soon

Lopez senior, who is prone to exaggeration and even at times silliness in propping up his son, spoke to “Seconds Out Radio” early Sunday and expressed regret that Teofimo did not go ahead and drop his lightweight titles and move up to Jr. Welterweight prior to defending against Kambosos,

“There’ll be no rematch, man. My mistake was leaving my son at 135 lb. so long….In this game you gotta knock everybody out. If you don’t knock them out, this (decision loss) is what happens,” Lopez Sr. told the show.

“We gonna go up to 140 lb., get a fight in in February. Then, fight Josh Taylor in the Spring time. We’re still gonna do what we said we’re going to do. This (the loss) doesn’t change anything.”

Now, obviously Lopez had a huge financial stake in fighting Kambosos, as he got the highest payday of his career, when the much-delayed fight that finally came off Saturday night.

However, whether it was a 13-month layoff and/or the strain of trying to make 135 lb. or Kambosos just being a lot better fighter than what they anticipated, Lopez largely got out-fought over the 12-round main event. This included the Australian scoring a first round knockdown and out-landing Lopez by Compu-box stats 155-115 in power shots over the 12 rounds.

Yet, despite Kambosos saying in the ring immediately after the fight that he would want to fight Lopez again in his home Australia, in front of 80,000 people in a stadium, it doesn’t seem that the Lopez’s will be interested in the short-term.

As Lopez Sr. mentioned in the interview, it is in part because Teofimo had already re-signed a new deal with Top Rank Boxing. And that makes potentially an opportunity later in 2022 to fight Taylor for his Undisputed 140-pound championship. Taylor still has a mandatory defense with Jack Catterall coming up first. Taylor was originally to have defended in his home country of Scotland in December, but suffered a knee injury in training last month. So, the fight is pushed to February.

That means if Lopez were to fight a contender bout around that time, the schedules would match for them to fight later in the Summer, etc.

Still, you take into consideration that Lopez Sr. interview came immediately after a crushing first professional loss for his son. And, then, the fact that Top Rank and promoter Bob Arum understands there would be “real sizzle” (especially in Australia) for a Kambosos-Lopez II, and perhaps the Lopezs will be willing to come back to the table for a rematch?

Now, we’ll wait for Lopez’s next move to dictate that.