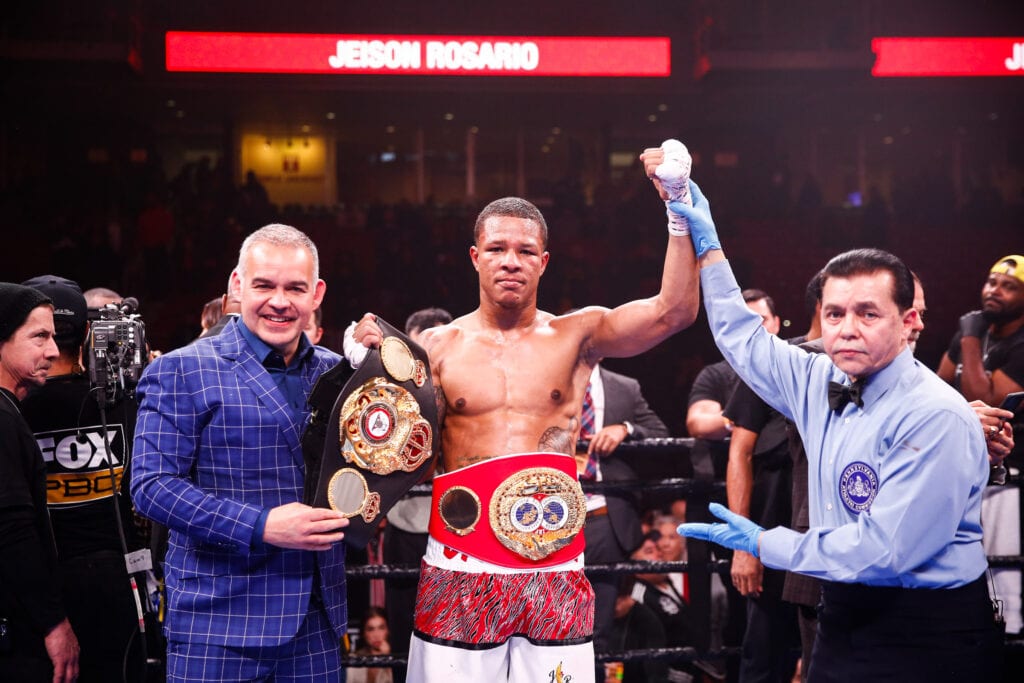 No distractions for Jeison Rosario

WBA/IBF Super Welterweight champion Jeison Rosario Rosario (20-1-1, 14KOs) has been doing nothing but preparing and training as he takes on Jermell Charlo  (33-1, 17KOs) to close out the Showtime pay-per-view this Saturday, September 26, from “The Fightsphere” of the Mohegan Sun Casino in Uncasville, Connecticut.

Speaking with Jake Donovan of Boxingscene.com, Rosario explained that the training for this bout because of the pandemic made it more comfortable.

“To be honest, it’s been easier to train during the pandemic,” Rosario said to BoxingScene.com. “We’ve been able to concentrate more on just preparing for this fight. With so many things shut down, there isn’t anything we can do anyway other than train and quarantine.

“When I came to training camp, I wasn’t interested in anything besides preparing to beat Jermell Charlo. It’s been easier to train without any distractions. The only places I am able to go anyway are to the gym and then back to the house. Nothing else interests me.”

Rosario: It Has Been Easier For Me To Train During Pandemic, No Distractions https://t.co/WRvUsaGhCo pic.twitter.com/dsszhPtZjb

Rosario was last in action back in January when he kicked off the year with his upset win against Julian Williams in his hometown bout of Philadephia. That contest ending with a fifth-round stoppage earned him this chance to take on Charlo this Saturday. One of the things that stood out in that fight was something he said at the final presser leading into it.

“I’m coming for war. That’s my mentality. I don’t have a prediction. I’m going to give it my best and give everyone a war. At the end of the day, I’ll have my hand raised,” Rosario at the final presser back in January.

Having his hand raised, Rosario did. He attributed that last camp to easing the preparation for the current one.

“The last camp we had was the first one that was different from all of the others in my career,” stated Rosario to Boxingscene. “It was my first time really putting in all of the hard work necessary to get through a full training camp and achieving greatness. My body grew accustomed to it, and it made things much easier for this camp.

Another thing he has been accustomed to is being the underdog in these contests. He was against Williams, and as of this writing, he is a 5 1/2 to 1 underdog against Charlo to become a unified champion. We’ll see if Rosario can pull off his second upset of 2020 this weekend.