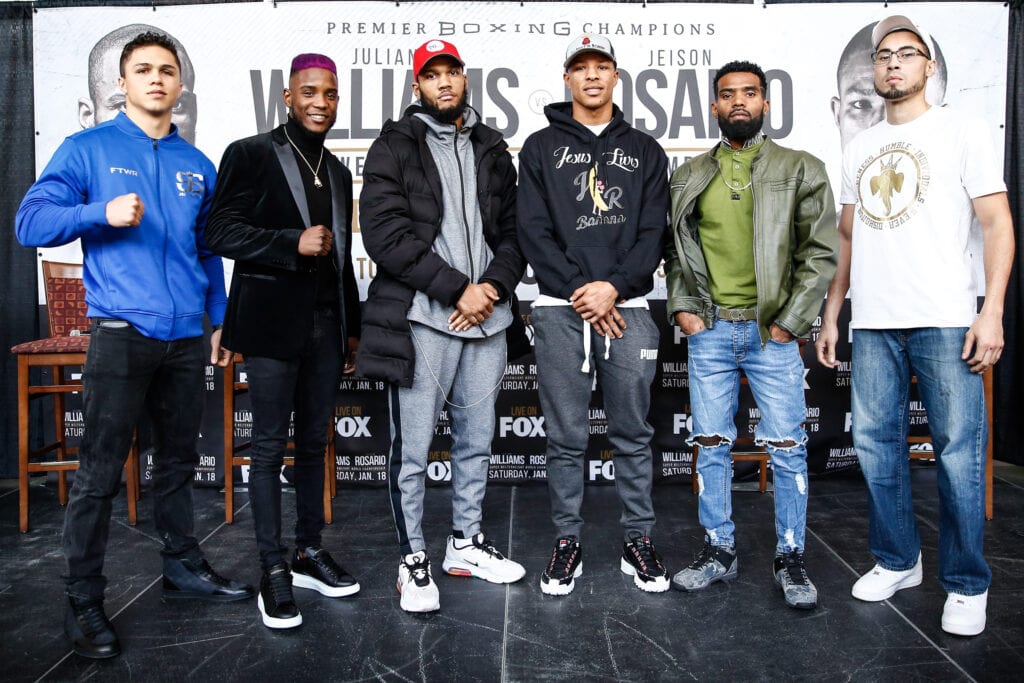 Tickets for the live event, which is promoted by TGB Promotions, are on sale now and can be purchased at http://www.liacourascenter.com/events or by calling 800-298-4200.

Here is what the fighters had to say Thursday at the Liacouras Center:

(All Photo Credit to Stephanie Trapp/PBC) 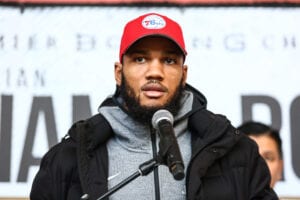 “This is going to be an exciting night of boxing. I don’t need to say too much, but I’ll definitely let my hands do the taking for me on fight night.

“I know this is extremely significant for my community, but I’m so locked in on the fight, I haven’t been able to really think about it too much. On Monday I’ll be able to think about the significance, but none of it will affect me during the fight.

“I’m thankful to be in this position to bring my titles back to my city, but I’m not thinking about it or letting it distract me from Rosario I’m locked in on fight night and having my hand raised.

“There must be something in the water here in Philadelphia. There’s so many great champions from here. Philadelphia is small too, but there’s a long line of history and it keeps getting passed down from generation to generation. I’m just happy to be one of them.

“I’m all about setting goals. That’s how you keep moving forward. My goal was to become the world champion. That was my goal since I was a kid. I achieved that and now I created new goals. I’m just as hungry now as I was when I first started this sport. I can see these next goals in front of me now.

“He keeps saying we’re going to have a war, because he can’t do anything else with me. There’s nothing in the ring he can do to bother me. I’m coming to step on him. I’m coming to dominate and win in spectacular fashion.” 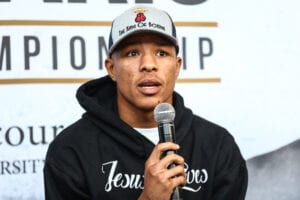 “Hello Philadelphia, I’m excited to be here for this fight. This is an opportunity I’ve been working so long for and I’m going to take full advantage of it.

“I feel strong and confident. There’s no pressure on me and I’m very motivated. This is nothing new for me, coming to my opponent’s backyard. I haven’t fought in my home country yet, so this won’t phase me at all.

“When I had my loss, that was when my career really started. That was a different stage of my career. I’ve gotten better and better and this fight is really the first time I’ve had a full training camp for a fight. I’m excited to show everyone my improvements.

“I’m coming for war. That’s my mentality. I don’t have a prediction. I’m going to give it my best and give everyone a war. At the end of the day, I’ll have my hand raised.

“I had a great training camp and I’ve worked hard from even before we knew we had this fight. I knew that one day my opportunity would come. This is what we’ve waited for.

“I’m ready to leave it all in the ring. We trained every day so we I know exactly what I have to do when that bell rings. His fans can’t fight for him, so there’s no way he will beat me.” 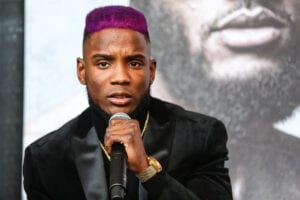 “I always work hard. This is just going to be another day for me. I’m one of the baddest young fighters out here, and I’m going to show it Saturday night.

“Corrales had a world title before and he’s not getting it back from me. I’m sending him back to Panama empty handed.

“I bring the style and the flair and you’ll see it all on Saturday. I’m going to be put on a great performance and become WBA champion. That’s the plan.

“Saturday night is just another fight for me. I have to do what I have to do. Belt on the line or not. I don’t feel like there’s anything he can bring to stop me. I bring the speed, the power, and I’m smart. Nothing he’s doing can stop me.

“I feel like I was more about punching and moving before. I would punch and move at the same time. I always knew I had some type of power from sparring. But I’m sitting down on my punches more to make sure that these guys respect me. I have to go in there and show him what I’ve got.

“I love the bright lights. I played football before I boxed and I always wanted to be a star. I’m going to go out there show the world why I call myself ‘Prime Time’. I’m looking to steal the show. That’s what I’m going to do come Saturday night.” 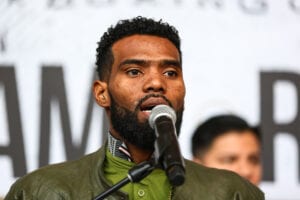 “I’m grateful to be here in the United States fighting on this great card. I’ve had a great camp and I’m moving forward and working hard to make the most of this opportunity.

“I have all the equipment and all of the tools I need to fight him and beat him. I know that he’s a great fighter, but so am I. I’m going to come out of this with the belt.

“We’re leaving it up to fate now. We worked hard and we’re ready to put on the best performance of my career.

“I’m not worried about any of his trash talk or anything he says up here today. We’ll settle it in the ring with our fists.” 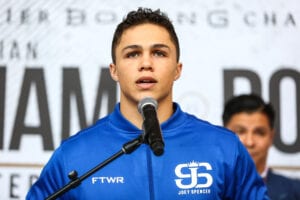 “I can’t wait to put on an exciting performance Saturday night. I don’t have any pressure on me. The only expectations I’m trying to keep are from my family and the man upstairs. I just train hard year round, we don’t take any breaks. We’re always training and I’m ready to go in there and show off.

“I would say this is the year where I become a contender. I worked hard last year so that I’ll be a contender by the end of this year. I’m ready. We’ve worked on a lot of things and this year I’m hoping to show that and shine starting Saturday night.” 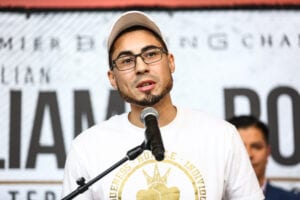 “I want to thank my team that helped me get this fight against Joey Spencer. It’s a great opportunity for me. Saturday night I’m going to pull of that upset. Don’t miss it.

“The odds are what they are. I prepared and had a solid camp. People think I’m an underdog but I think I’m the big dog. Come Saturday night we’re going to see.

“I don’t know if Joey has faced anyone like me. We’re going to find out in the ring because I’m ready to do anything it takes.”