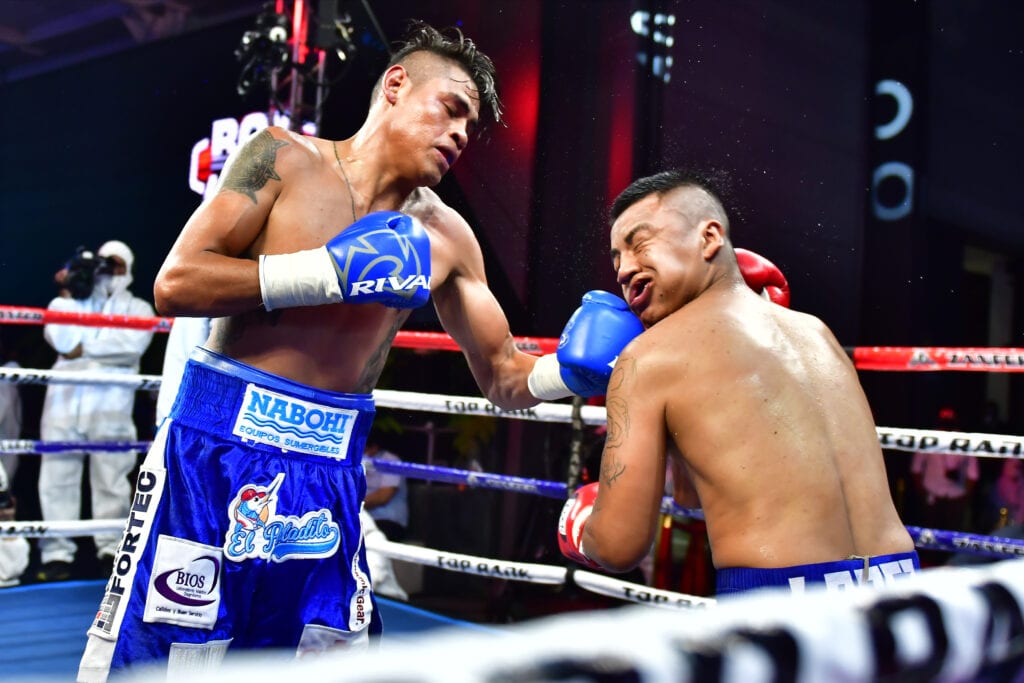 We discuss more about Navarrete’s chances, the slick boxing of his opponent, and more on our latest “Big Fight Weekend Podcast” as ESPN’s Steve Kim and Marquis Johns, Sr. Writer for the site, join me:

“I’ll make this statement, right now: Ruben Villa is better than Navarrete faced since wining the title. And, that includes Issac Dogbe (former WBO 122 lb. champ). He’s a skilled southpaw…and keep in perspective that in four amateur fights he went 2-2 with Shakur Stevenson,” Kim warned us about the opponent Friday night.

Meanwhile, in his first fight post Covid 19 outbreak, “El Vaquero (Cowboy)” Navarrete, 32-1, 27 KOs, knocked out little known fellow countryman, Uriel Lopez (above), in the sixth round in June. That was, while making his Featherweight debut in a bout from TV Azteca Studios in Mexico City.

It was the sixth victory in the previous 13 months for Navarrete (32-1, 28 KOs), who burst on the scene, when he upset Dogboe in December 2018 to win his WBO World Title.

Navarrete has now won 27 fights in a row since suffering his only pro loss in his sixth bout.  Also, he previously injured his right hand in his 11th round TKO of Jeo Santisima in February on the undercard of the Tyson Fury-Deontay Wilder card in Las Vegas. However, that hand has fully healed and he showed no effects in bombing out Lopez nearly four months ago.

This bout will headline, without fans, in the Top Rank “bubble” at the MGM Grand Convention Center and will be televised on ESPN basic cable.

There is no doubt that Navarette has been one of the most active and exciting champions of the last two years. Now, we’ll see if he can solve the challenging style of Villa and get another impressive stoppage.

Lipinets credits preperation to Joe Goosen
Navarrete captures featherweight title over Villa
Advertisement
To Top
We use cookies to ensure that we give you the best experience on our website. If you continue to use this site we will assume that you are happy with it.OkPrivacy policy