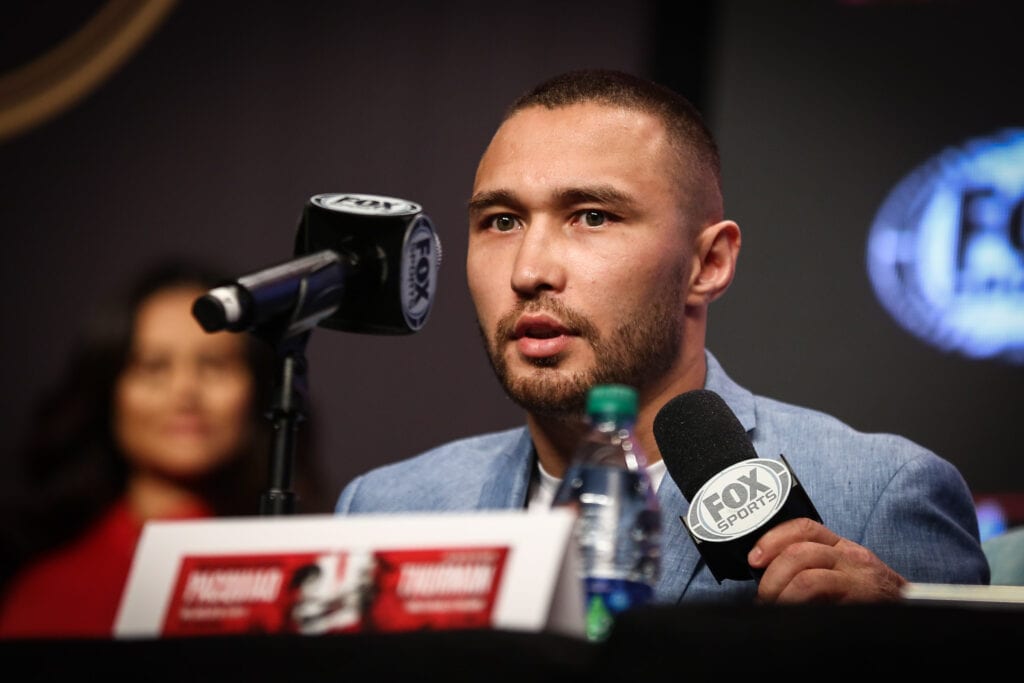 Former world champion Sergey Lipinets has not let anything, be it the pandemic or a change in fight date, distract him from preparations for his battle against unbeaten Kudratillo Abdukakhorov, as they fight for interim IBF Welterweight Title headlining action live on SHOWTIME Saturday, October 24 (9 p.m. ET/6 p.m. PT) in an event presented by Premier Boxing Champions.

“I took the change in date like a champion, and I’ll do the same thing on October 24 that I would have done on October 10,” said Lipinets. “I’m very strong mentally, so there’s really no issue with the timing change. Training camp has been going great and I’m 100% ready for this one. I’ve been working with Joe Goossen and sparring with a lot of great fighters including Rashidi Ellis and Ronald Cruz.”

The 31-year-old Lipinets credits the renowned coach Joe Goossen for the level of performance he has shown in the ring in the two years that they’ve worked together. The union between Lipinets and Goossen followed Lipinets’ run at 140-pounds, which saw him defeat Akihiro Kondo for the IBF Super Lightweight Championship on SHOWTIME in 2017 before losing the title by decision to Mikey Garcia the following year.

Be it as it may we ll be war ready whenever it comes knocking pic.twitter.com/a4QLgfWd9x

“My progression is totally attributed to working with Joe Goossen,” said Lipinets. “It’s like going from a high school education, then to college, and now I feel like I’m in graduate school. I’ve learned more with Joe than in all my previous time in the sport.

“Joe Goossen has taught me a lot about the short game and working on the inside. He’s also helped me with my lateral movement and made me way more durable. That’s all combined with my power increasing at 147 pounds. I’m ready to show all of it on October 24.”

Lipinets added two knockout victories to his ledger in 2019. In March he stopped two-division champion Lamont Peterson in a memorable firefight before blasting out Jayar Inson in the second-round in July. A win on October 24 not only puts Lipinets in line for the winner of the matchup between IBF and WBC Welterweight Champion Errol Spence Jr. and two-division champion Danny Garcia but also will help solidify his spot amongst the best in the star-studded 147-pound weight class. However, these potential high-profile matchups don’t take anything away from his focus heading into his upcoming fight.

“I don’t really think about the other top welterweight fighters like Errol Spence Jr., Manny Pacquiao, Danny Garcia, Keith Thurman, Shawn Porter or Terence Crawford,” said Lipinets. “In order to get to them, I have to win on October 24. Then everything else will fall into place. The top guys will fight me when they have to. That’s been the story of my career. Nobody has fought me because they wanted to, but usually because they had to.”

The unbeaten Abdukakhorov presents a challenge that Lipinets embraces. Abdukakhorov enters this fight after a victory over former champion Luis Collazo in addition to the extensive amateur experience that Lipinets knows will make him a formidable opponent when they square off October 24.

“Nobody is at the top of the IBF rankings for nothing,” said Lipinets. “Abdukakhorov had a successful amateur career with a lot of fights. He moves fast and knows his way around the ring. I know he’s tough, strong and he’ll do his best to stay in there with me. But I’m going to box him, fight at a distance if I have to, and pile up points against him. I expect a great fight. I’ll have a plan for whatever he brings to the table and get the win however I have to!”

Errol Spence-Danny Garcia PPV moving to December with fans
Navarrete Looks To Add WBO Featherweight Title Friday Night
Advertisement
To Top
We use cookies to ensure that we give you the best experience on our website. If you continue to use this site we will assume that you are happy with it.OkPrivacy policy