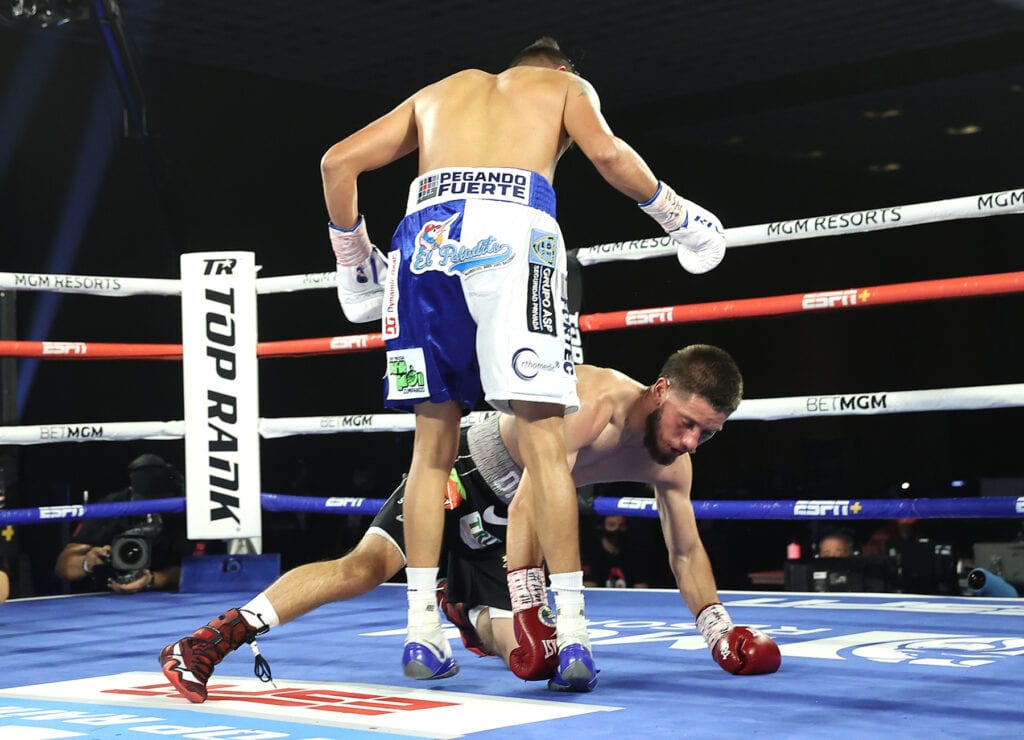 The main event on ESPN was for the vacant WBO Featherweight title between Emanuel Navarrete and Ruben Villa. The anticipated matchup ended with Navarrete winning by unanimous decision very decisively, scoring two knockdowns of the contest.

The judge’s scorecard for this one had it for Navarrete 114-112 x 2 and 115-111. The fight on the broadcast looked a lot wider than the judges’ scorecards.

With this win, Navarrete (33-1,28 KOs) captures the WBO featherweight title left behind by Shakur Stevenson when he moved up in weight. Villa suffers the 1st loss of his career, falling to 18-1 (5 KOs). We spoke on the podcast leading into the fight being a tough test for Navarrete, and once the bell rang, that proved false.

Navarrete got the action going with a nice left uppercut flooring Villa in the closing records of the 1st round.  Villa beat the count, but it was apparent that early on that Navarrete was going to apply his style of throwing in close on the southpaw Villa.

FAST start for El Vaquero with the slick uppercut putting Villa down in R1 👀🤠#NavarreteVilla | LIVE NOW on ESPN pic.twitter.com/magLW7mj1Y

By the third round, Villa was boxing better and avoiding a lot of what Navarrete was throwing, but was knocked down again in the fourth round with another left that landed flush on his face. Villa once again beat the ten count and continued.

After the second knockdown in the fight, it was clear that Villa’s plan in the ring switched to trying press the issue more, but while he was firing a lot more from this point, it seemed that he didn’t have anything to keep the pressure of  Navarrete.

Despite that, Villa made a better fight of this in the latter end of the fight and even won a couple of the rounds in the second half of the fight.

Jessie Magdaleno was the original opponent for Navarrete and turned this fight down. Next for Navarrete will have to be seen as he has been one of the most active fighters at 126. It’s not a matter of who’s next but rather who’s up.

Navarrete Looks To Add WBO Featherweight Title Friday Night
Allen-Hammer added to Usyk-Chisora
Advertisement
To Top
We use cookies to ensure that we give you the best experience on our website. If you continue to use this site we will assume that you are happy with it.OkPrivacy policy