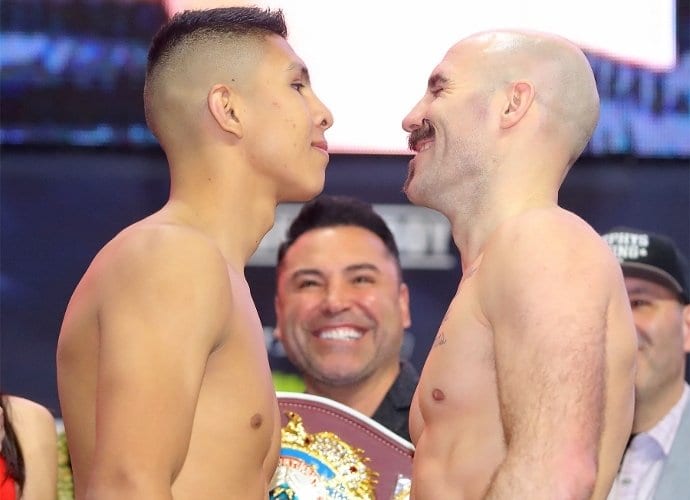 Former WBO Junior Middleweight champion, Jaime Munguia has aspirations for a middleweight title shot and he will take a step towards that with a win  tonight in San Antonio, Texas.

Munguia will take on lightly regarded,  journeyman Gary “Spike” O’Sullivan from Ireland, who’s fought for the last few years out of the Boston, Massachusetts area, in a scheduled non-title 12-rounder.

Munguia, 34 – 0, 27 KOs, gave up his WBO belt last month after five successful title defenses in hopes of landing the biggest payday of his career at 160 lb.

We discussed this matchup on our Big Fight Weekend podcast, including Sr. Writer, Marquis Johns, thoughts on the matchup:

Munguia had been hoping to be an opponent of Canelo Alvarez’s this past fall, while Alvarez struggled to come up with a suitable fight site and date with Golden Boy Promotions and DAZN streaming service. Eventually, Canelo elected to move up to light heavweight to fight Sergey Kovalev and knocked him out in the 11 round in November to capture the WBO Light Heavyweight Title.

Alvarez has since vacated that belt and is looking to move back down to 168 lb. It is now unlikely that he would fight Munguia for that reason, at least in the short term.

As for his opponent tonight, O’Sullivan, is a 35 year old journeyman with a 30-3 record. O’Sullivan has only fought once in the last 10 months, and that was a TKO win last March.

Munguia was in action more recently, as he took a title defense against Patrick Allotey and knocked him out in the fourth round in September at the Dignity Health Sports Complex in Carson, CA.

There is also a chance that Munguia could fight newly crowned IBF Middleweight champ Gennady Golovkin later in 202o. Golovkin, the former Undisputed 160 lb. champ, is slated to make his first defense in March.