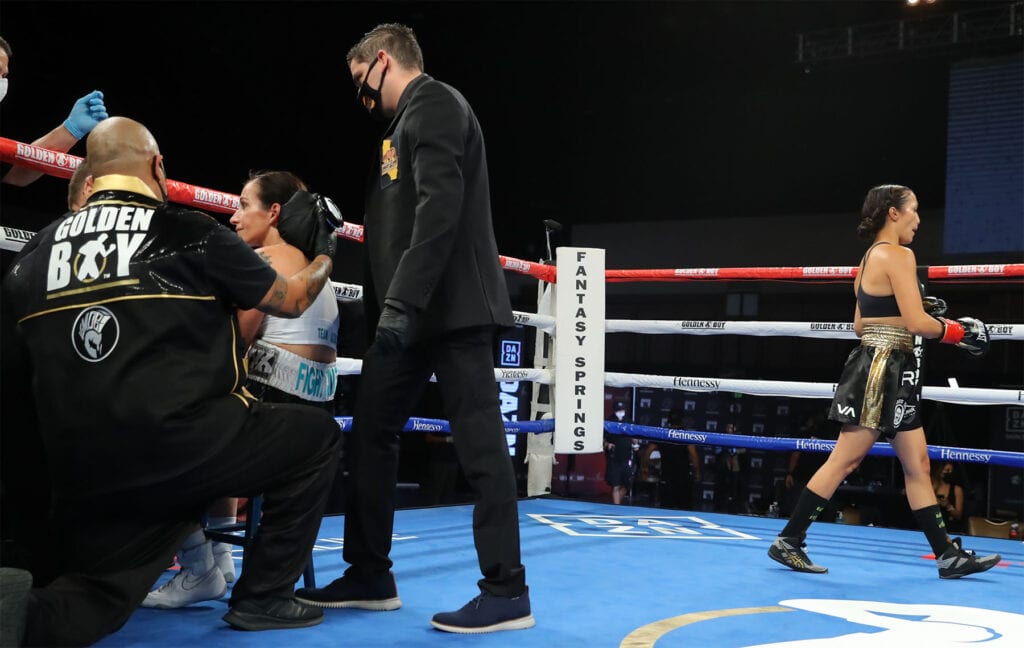 We have begun to learn more about the ridiculous set of circumstances that led to Friday night’s near-instantaneous knockout in a women’s fight between Seniesa Estrada and Miranda Adkins on the DAZN/Golden Boy Promotions broadcast from California. And, the more we find out, the more comical and corrupt it appears.

The 42 year old Adkins from Kansas was demolished in only seven seconds when Estrada, who came into the fight 18-0, walloped her with a quick one-two combination.

The video of the fastest recorded women’s KO on record from Friday night in Indio, California has gone viral:

The referee stopped the fight without even bothering to count, ending it just seconds after the bell.

Our Marquis Johns wrote in the aftermath of the fight that Adkins 5 – 1 professional record was being questioned, because she seemed so utterly defenseless and outclassed from the jump.

And, that was verified by O’Hara, who uncovered that her professional record appears to be a total fraud. This is because Adkins husband, promoter John Carden, had her repeatedly fight women who were not fighters but instead, professional strippers. And, apparently, most of them had never been in a boxing ring before.

An unnamed source told O’Hara about Adkins’s fights and that the exotic dancers didn’t even have boxing equipment of their own,

“They show up to the venue with nothing,” the source said. “No shorts. No shoes. No mouthguard. Nothing. Then, they borrow from (other) fighters. It’s really f—– up.”

O’Hara got further comment from Robert Garcia, the Matchmaker for Golden Boy, who put the fight together on short notice when Estrada’s original opponent Jacky Calvo, could not fight because of a knee injury.

Garcia is speaking out, now, because California state Commission Executive Director, Andy Foster. has been largely criticized for the last three days for sanctioning the women’s “fiasco” Friday night,

“It’s not fair that Andy has taken this amount of criticism,” Diaz stated. “At the end of the day, he doesn’t make the fights – he is only involved in the process of approving them. I’ll take full responsibility – I was the one who made the fight.”

Garcia further told the Ring, “I asked for her (Adkins) amateur experience. The only thing I saw is what everyone else saw; she’s 5-0 with five knockouts,” he stated.

Apparently, there wasn’t much offered by her husband, yet, the fight stayed on the schedule.

Hear us discuss more on this controversy and upcoming fights on the latest Big Fight weekend podcast:

O’Hara went on to detail that the husband, Carden has another controversial promotion in his background that includes having allegedly knowingly put a fighter, who had previously competed in the Special Olympics into a professional fight with a boxer named, Bryan Timmons.

That bout took place in St. Joseph, Missouri in April of 2016. Timmons quickly realized that the fighter, James Kindred, had no business being in a pro ring with him. And, he was actually trying not to hit him hard or hurt him before the referee stopped the obvious mis-mtach in the second round.

Timmons remains furious four years later that Carden put him in the ring, unknowingly, with a fighter who could have been seriously injured in a professional prize fight. He had posted this on social media,

“John, you can take your apology and shove it!!” Timmons stated. “You knew the whole time what you did and now you are trying to cover your ass. You care more about the money in your pocket than you do the safety of the fighters and there is a special place in hell for someone like you.”

There is no word on whether further sanction may be coming for Garcia and Golden Boy for not having done more to provide the California commission with info on Adkins’ background before the Friday night 1st round KO.

Usyk shows off “dance moves” in gym video
Barrios in training camp to prepare for Karl
Advertisement
To Top
We use cookies to ensure that we give you the best experience on our website. If you continue to use this site we will assume that you are happy with it.OkPrivacy policy