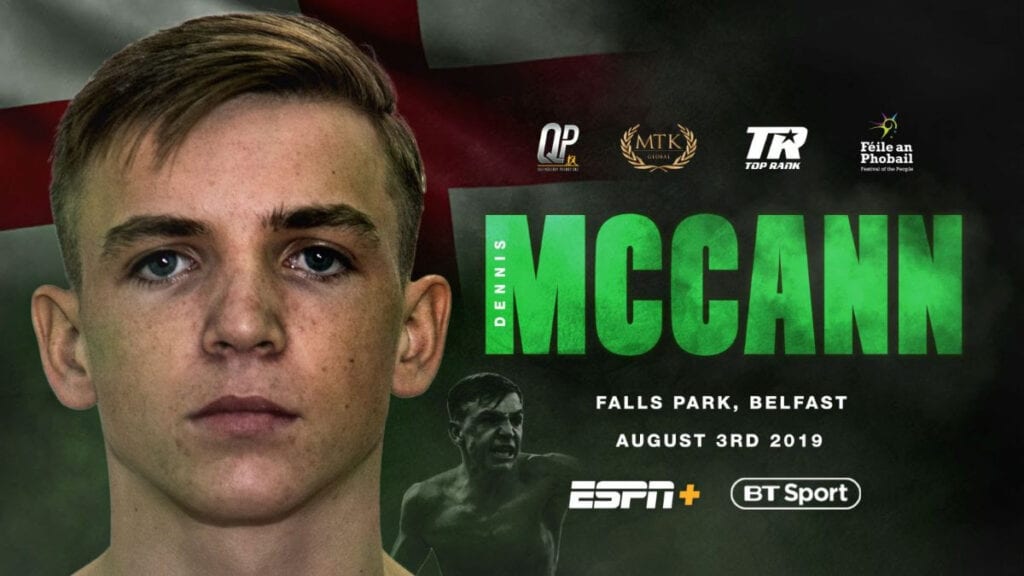 McCann to appear on Conlan card

One of boxing’s brightest prospects Dennis McCann will showcase his wares on the #MTKFightNight at Féile an Phobail on August 3.
In his first two professional bouts – a vicious early knockout win and schooling of a fighter with a winning record, ‘The Menace’ has shown different elements to his well-documented talent.

Now the 18-year-old, who is promoted by Frank Warren, gets a chance to shine on another huge stage; the undercard of Michael Conlan’s homecoming against dangerous Argentinian Diego Alberto Ruiz in Belfast’s Falls Park.

Ahead of a scheduled six-rounder, McCann said: “I’m hugely excited to be added to this bill. I’ve got some family over the water there and I’m looking forward to performing for them and all the fans in Belfast.

“I love the bright lights, the big nights and believe I’ve already shown I can entertain the crowds. My first fight was a quick-fire stoppage and in my second, I had him going to the point he was holding on for dear life.

“I hope on August 3, I can serve up another thrilling victory for everyone in the park and those tuning in around the world. I’m still a teenager but I’m building myself a name pretty quickly.”

Professional Development Coordinator Jamie Conlan said: “We welcome Dennis onto this historic bill and believe he’ll provide another treat for every single spectator.

“You only have to look at his first two professional victories to know that ‘The Menace’ has every gift a fighter can have. We believe he’s going places and it’s great he has this huge stage on which to showcase himself.”