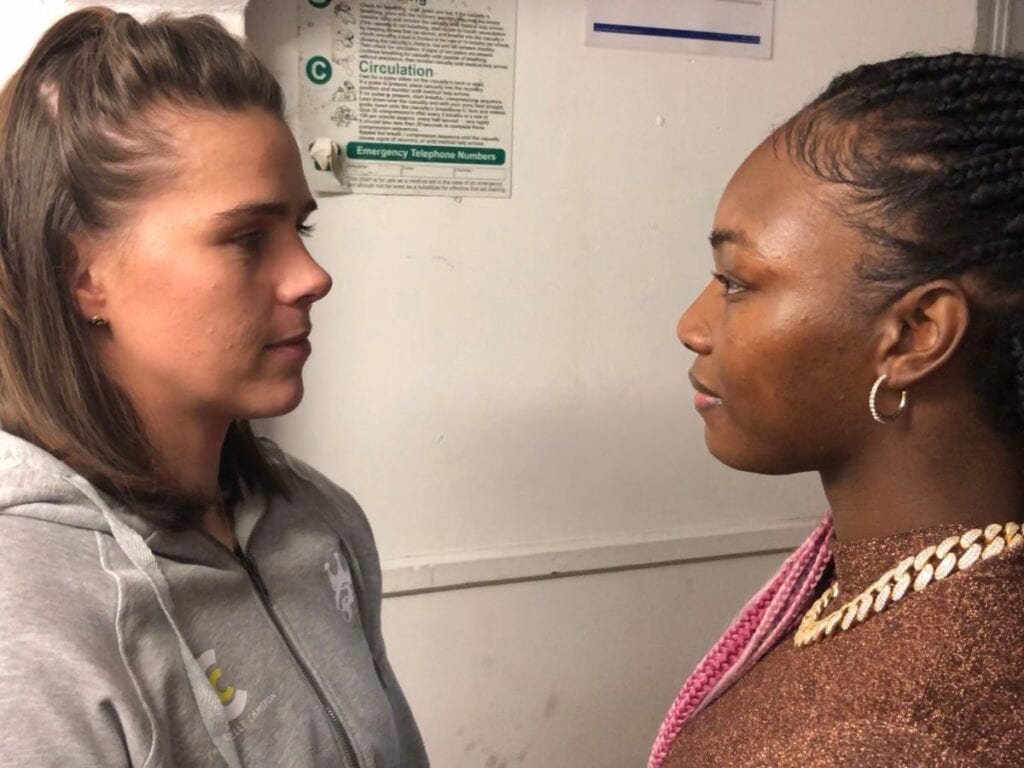 Marshall and Shields have stare down Saturday

Savannah Marshall (8-0, 6 KOs) famously beat Claressa Shields (9-0, 2 KOs) in the amateurs and with the American having since turned professional and become unified middleweight champion, a colossal rematch looks on the cards.

The pair both attended Saturday night’s #MTKFightNight at York Hall and Marshall wore a contented smile as Shields conducted an iFL interview with enthusiasm.

🗣 "See you at Hartlepool social club…?"

'Amused' @SavMarshall1 reflects on her face-off with unified world champion @ClaressaShields at #MTKFightNight.

Reflecting on their subsequent face-off, Marshall said: “To me, she’s just another future opponent so it was no biggie but I enjoyed it and it amused me.

“I knew she was going to be at the #MTKFightNight and therefore I wasn’t surprised to be asked to do a head-to-head with her.

“I’ve seen so many emotions from Claressa over the fight we had but she seemed pretty mellow about it on Saturday.

“Our rematch could 100% be the biggest fight in women’s boxing but I don’t care about the location. Hartlepool Social Club would work for me!

“I know she is keen to stress she was younger when we first fought but I consider myself a late bloomer in terms of my strength too. There have been massive improvements in my power.”

Marshall was at the event to support close friend Chantelle Cameron, who blasted to WBC world super-lightweight mandatory status while Shields watched on from ringside with sparring partner Hannah Rankin.

This may have just been a great opportunity just to get both of them at the same place in York hall Saturday night. While both are at some point on a collision course at some point, it may be down the line the actual rematch will take place.  I’ve written on here about how Marshall wants to win a title before even taking on Shields. Shields meanwhile is trying to collect belts and is reported to take on Ivana Habazin in January after the previous slated contest was called off when Habazin’s trainer was attacked at the weigh in.

Kilmas- Usyk-Chisora matchup a possibility
KSI-Logan Paul 2 was seen- but how?
Advertisement
To Top
We use cookies to ensure that we give you the best experience on our website. If you continue to use this site we will assume that you are happy with it.Ok