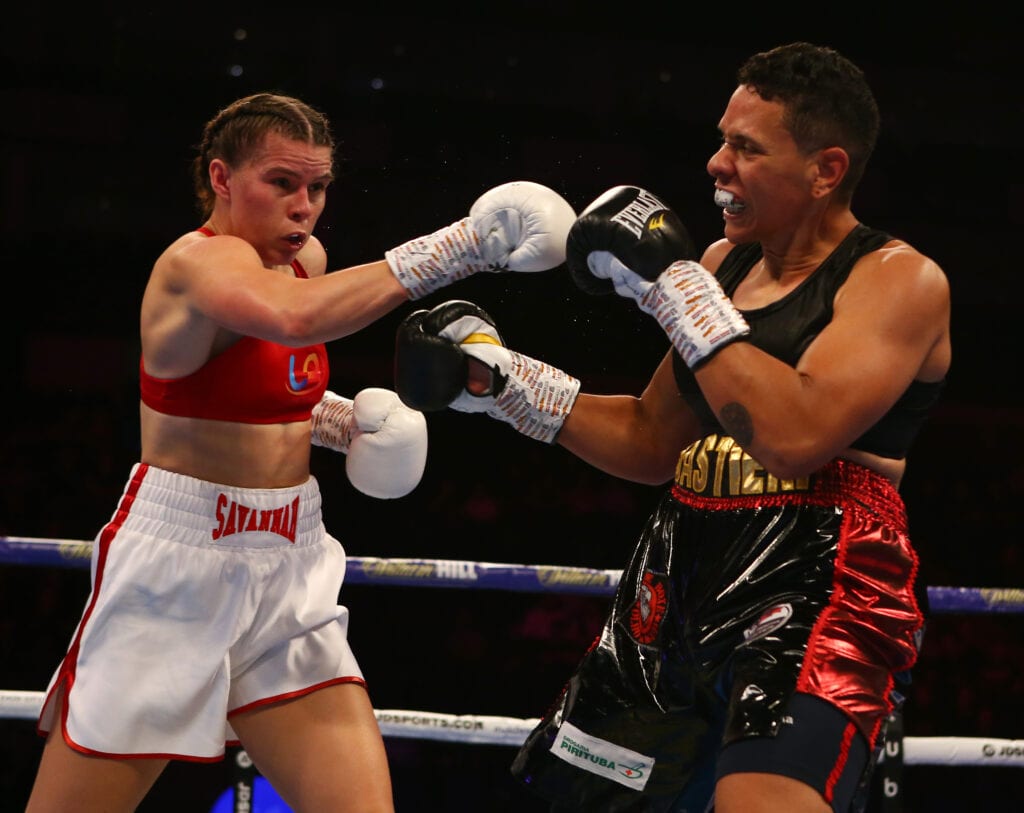 Savannah Marshall-Claressa Shields? Not just yet

One thing for sure after Saturday’s card that was apparent is sooner or later Claressa Shields, and Savannah Marshall need to settle their differences in the ring again.

Marshall (7-0, 5 KOs) made her Matchroom Boxing debut on Vasily Lomachenko-Luke Campbell undercard Saturday against Daniele Bastieri at the O2 Arena in London, England.

I want to give Bastieri (2-1, 2 KOs) all the credit in the world but they flew her in from Brazil and in her two stoppage wins faced no one with a winning record.  What ended up happening was Marshall, who won a Gold medal in the 2012 World championships spent five rounds picking apart Basteri, who she already beat in the amateur ranks.

That onslaught was finally stopped a few seconds after the bell sounded to end the fifth round before Bastieri could go back to her corner.

Pep Talk UK asked Marshall after the fight about the eventual rematch, and she stated that it might come in due time.

“At the minute I’m super middleweight, ” Marshall told Pep Talk UK. “I know I’ve got the potential to show everyone that I’m one of the best female boxers in the world. I’d like the win a title at super middle(weight), like to unify and have a crack at the titles at middle.

While we wait for Marshall to pick up straps which seem likely to happen sooner than later, Shields is back in action in October to make history to become the fastest three-division world champion male or female, when she takes on former world champion Ivana Habazin in Flint, Michigan.

Marshall, when asked why does Shields keeps calling her out and Marshall replied, “Because she’s got nowhere else to go. She beat Christina Hammer so all that there is left to box? Me. So she needs me.”

It is well documented that Marshall is the last person to beat Shields in the amateur ranks back in 2012 and the war of words and exchanges have continued about it since then. Whenever this match does happen, and I think it will, it shall be the next most significant match in women’s boxing.