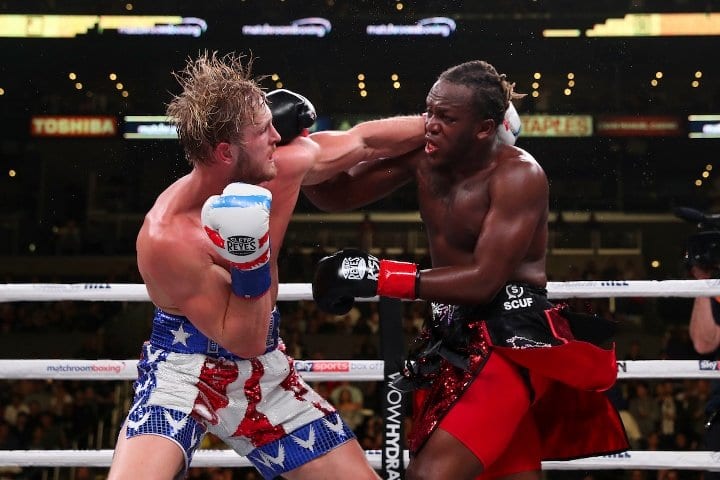 KSI-Logan Paul 2 was seen- but how?

There was a match up on Saturday night that closed out the Staples Center in Los Angeles, California between YouTube stars KSI and Logan Paul. The highly awaited rematch between the two was sanctioned the second time around at cruiserweight and resulted with KSI winning a close split decision after six rounds. Personally, I was more interested in newly crowned champion Devin Haney who was in action beforehand.

Eddie Hearn was on Monday with Sirius/XM Fight Nation on the newly created “The AK and Barak Show” and explained that the fight between two YouTube stars was a success.

“It’s the biggest pay-per-view in the UK of the year so far,” Hearn told Fight Nation. “That includes the first Joshua-Ruiz Jr fight from America. This fight was cheaper, was half the price of that. ‘I believe DAZN will announce some numbers this week but I understand it was the most-viewed fight on DAZN so far.”

Slow #boxing day but from i did catch on XM was the DAZN guys do a midday show and had Hearn on who said last weekend did record numbers? Shocker…

The question I ask is did they all pay for it? I’m here to tell you not so fast my friend.

DAZN when it comes to revealing numbers on their fight broadcasts just don’t in the United States and the new weekday boxing show interviewing Hearn with two guys who are employed by the same streaming service that aired his most recent fight card isn’t going to shake the skepticism by anyone in the media anytime soon.

To piggyback that point, the demographic of KSI and Logan Paul are aimed younger and younger to the point that most probably don’t have a credit card to pay for the subscription service without asking for parents to cough up and pay. Those kids like so many others were having to watch it the old fashioned way of pirating it on the web.

I can confirm the story that Bad Left Hook had about those not wanting to pay were watching via the dark web a man streaming the fight off the reflection his shades.(several random folks on Twitter DM’d me this link if I needed it.)  By all accounts in terms of illegal streaming, his glasses were the best feed over the weekend. Full disclosure, I’m already shelled out the $20. plus taxes to sign up but thought it was nice of the kids to “hook me up” in case I needed it.

While the gang here at Big Fight Weekend is going to tell you to watch the fight legally cause well it’s the law, some aren’t and in 2019 they’ll find a way to circumvent the process. That pirated stream alone had at one point over 11,000 views to it. There were countless others via Facebook Watch and other social media outlets doing these “fight broadcasts” as well that went undocumented and unaccounted for.

All of those watching the fight that way of course are watching it free of charge which is why I’d love to see what the actual paid total. Hearn stated that DAZN “might” reveal the numbers by the end of the week to Fight Nation but I wouldn’t hold your breath on waiting on that.

Marshall and Shields have stare down Saturday
Dillian Whyte to reemerge on Ruiz-Johsua undercard?
Advertisement
To Top