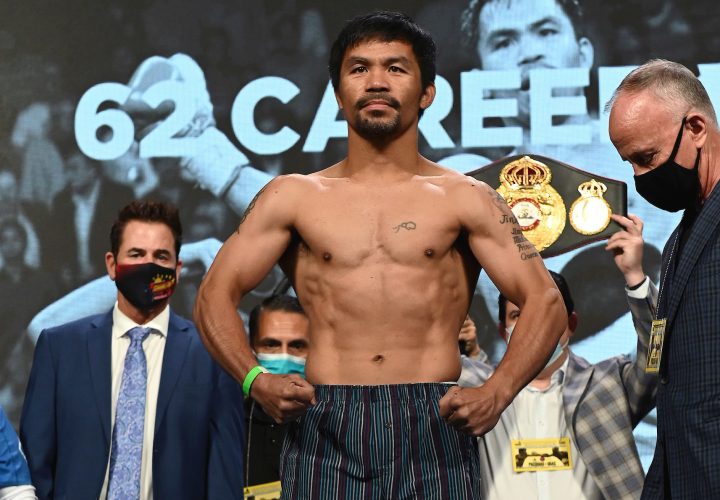 Manny Pacquiao will enter the ring tonight against Yordenis Ugas in a chance to not only challenge for the WBA welterweight title but also a chance to turn back the clock against father time once again.

The last time we saw Pacquiao in the ring was back in July 2019, winning a close split decision win against Keith Thurman. One of the biggest unknowns coming into this fight is how the layoff will play in the ring.

“I feel young right now. I’m just happy with what I’m doing because boxing is my passion. I enjoy training camp, and I’m excited to sacrifice and be disciplined every day to prepare for a fight like this,” Pacquiao said earlier this week to the media.

Make sure to catch our full breakdown with our guests Ray Flores of Premier Boxing Champions and TC Martin of the “TC Martin Show” in Las Vegas on our latest Big Fight Weekend Podcast by clicking below!

Original opponent Errol Spence Jr. had to withdraw due to an eye injury, and the late replacement Ugass stepped into this fight on less than two weeks notice.  For Ugas, the short notice fight is familiar territory as he took on Jamal James back in 2016. In that fight, our podcast guest was in the ring to call the scorecards, all in favor of Ugas by unanimous decision.

“Boxing is my passion. That’s why I’m still here giving inspiration to the boxing fans and bringing honor to my country,” Pacquiao said.

The fight originally had the feeling that this was going to be the grand finale for Pacquiao in the ring. That was before we found out that he still reportedly has another option for another fight under the Premier Boxing Champions banner and also since Spence had to withdraw out of the fight.

The sportsbooks have the eight-division world champion Pacquiao favored to recapture the title he never lost in the ring back again. If that happens, expect one more match from the future Hall of Famer and father time once again.