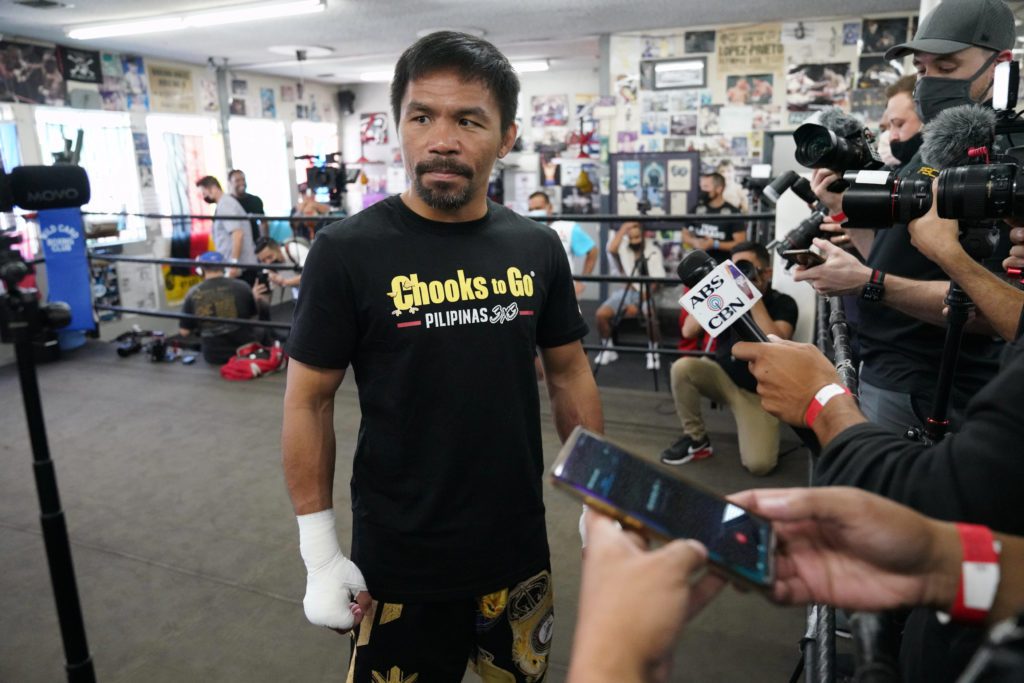 Manny Pacquiao To Return With Exhibitions

Having lost in the Filipino Presidential election earlier this year, future hall of fame fighter Manny Pacquiao has decided to come out of boxing retirement to make a couple of ring returns, albeit in exhibitions, coming up.

Pacquiao had already announced with only a little fanfare in August that he would go to South Korea and take part in a six round exhibition with Youtube star DK Yoo on December 10th. Now, he’s apparently also agreed to an exhibition with an actual lightweight fighter, who has an 18-0 record in the ring, for early next year.

The Manila Times reported Tuesday that “Pac-man” will fight prospec Jaber Zayani of France in an eight round bout that will apparently happen in Saudi Arabia in February. The paper and it’s website say that Pacquiao agreed Monday at his home to fight Zayani, who is his former sparring partner, and signed the contract for the bout with Saudi Prince Al-Walid Ben Talal and his Elite Sports Athletes promotion.

The former senate representative Pacquiao officially entered the presidential race when he retired after his loss last August to Yordeis Ugas by 12-round decision last August. Pacquiao prominently announced on video that he would walk away from the sport after a career that saw him win world championships in eight different divisions.

However, the very competitive presidential election was won by the son of the former dictator of the Philippines Ferdinand Marcos, Jr. Pacquiao didn’t come close to challenging Marcos in the voting. So, that led to the natural questions about a possible ring return?

Pacquiao, 62-8-2, has walked away with tens of millions of dollars in career earnings and a hall of fame career that saw him defeat the likes of Marco Antonio Barerra, Erik Morrales, Ricky Hatton, Oscar De La Hoya, and Miguel Cotto.

Pacquiao had been slated to fight unified welterweight champ Errol Spence for the August bout last year. However, Spence suffered an eye injury just two weeks before the PPV and was replaced by the Cuban Ugas. Ugas dominated Pacquiao with his jab and long right hands and the Filipino star looked aged in the ring.

There is still some belief that Pacquiao would try to fight Spence, but WBC/IBF/WBA champ is in heavy, private negotiation to fight WBO champ Terence Crawford probably in November.

So, now Pacquiao, who will be 44 in December, will apparently be content to fight exhibitions, although the fight with Zayani is against a prospect that’s 18-0 with 11 KOs. Zayani is familiar with Pacquiao, as he was one of his primary sparring partners when Pacquiao beat American Keith Thurman in the Summer of 2019.

“I was honest with the senator that I’m looking at this as my biggest break which I will surely maximize. I aim to create a buzz and become a household name. Sure, the organizers are calling this an exhibition but for me, it’s a chance to exhibit my talent as a future world champion,” Zayani to the paper Tuesday.

Golovkin’s Bigger Loss Was To Father Time
Boxxer/Top Rank Confirm Shields-Marshall Card Back On October
Advertisement
To Top
We use cookies to ensure that we give you the best experience on our website. If you continue to use this site we will assume that you are happy with it.OkNoPrivacy policy