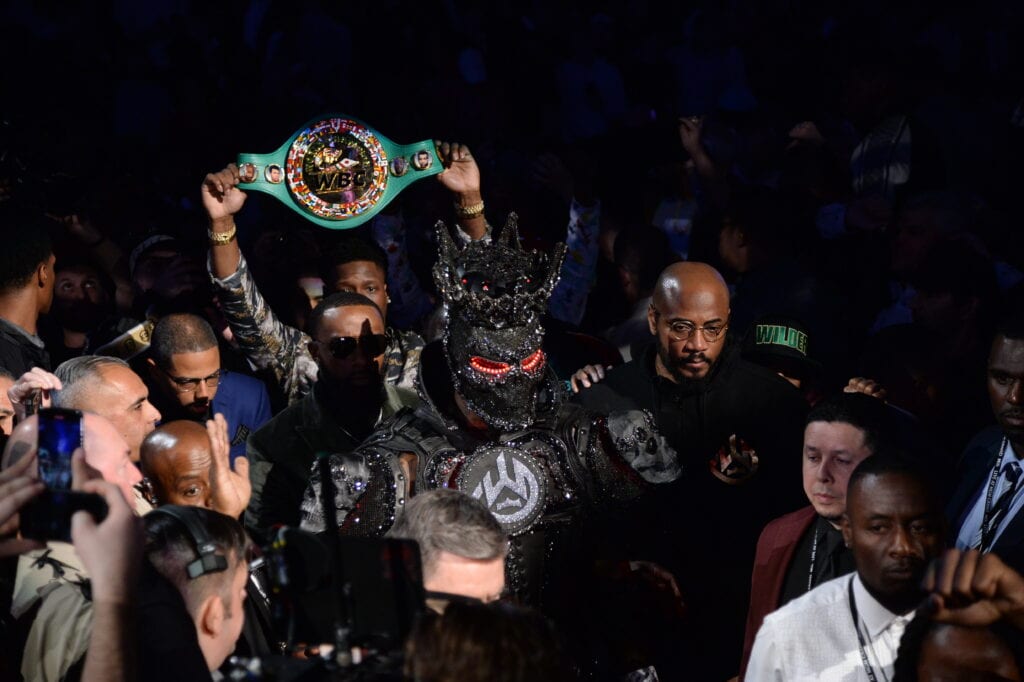 (Here’s England’s David Payne, a contributor to this site and our podcast, with a commentary on the aftermath and excuses for Deontay Wilder after his 7th round TKO loss to Tyson Fury for the WBC Heavyweight Title on Saturday night. Read more from David on his  Boxingwriter.co.uk )

As weary eyed guests checked out of the MGM Grand hotel and post fight podcasts sieved through the detritus of the weekend like a hopeless gold rush miner searching for an undiscovered nugget, veteran reporter Lance Pugmire revealed deposed champion Deontay Wilder’s claim that the weight of his ring entrance outfit had stolen the sap from his legs and contributed to his downfall.

To the average Joe, it was a line without precedent and one met with universal dismay or good old fashioned laughter. Quite how above average Joes; Louis, Walcott and Frazier, would’ve greeted the revelation one can only speculate. Consensus might reasonably assume any responses that were printable would’ve been light on empathy.

Spare a thought for the late American comedian Don Rickles too, who would be fuming to have missed the chance to pen an entire 20 minute “Roast” at the former WBC champion’s expense.

However incredulous the suggestion left everyone, even those lacking the grey hairs or vested interest to remember or recall those quartet of greats, it illustrates the timeless need of all fighters to preserve the internal monologue of their own invincibility. Specific to Wilder’s case, it also illustrates a clear failure to digest the manner and real tenets of his crushing defeat.

The second rematch is, barring retirement or injury, inevitable, no other bout will reward Wilder as lucratively as the contracted third nor could he entrust the prospect of redemption to the variables at work in boxing’s chaotic cesspool by taking a more circuitous route back to Fury. However futile last Saturday night makes the projected third encounter appear for the American, I think his courage needs to be applauded, he was broken but defiant last Saturday, and his willingness to risk, to dare in the first place, needs to be commended.

It is this determination to test himself and discover the truth of his ability, within his era, that should be remembered not the absurdity of his excuses in the aftermath of his first defeat. The review of his corner is a prudent step, despite the longevity of the relationship, given the apparent inertia and passivity demonstrated in the fight. At 34, there is little prospect of renewal, but evidently there is need for improvement, for the pursuit of a plan B.

For when Plan A, the big right hand, doesn’t work, Wilder has little else with which to either defend himself, or attack his opponent. Fury will surely respect Wilder even less in their third encounter.

There is sympathy to be found for a crestfallen warrior who finds himself lost, without the compass of his unbeaten record and the adopted certainty and gravitas of the belt it earned him. But character isn’t won or lost in the ring, only revealed. In the same way fights are often not won or lost on the night, but, as Muhammad Ali once said, “far away from witnesses, behind the lines, in the gym and on the road.”

He never mentioned 40 pound ring walk outfits and LED headgear either, and it would be wise for Wilder to dispense with such distractions too.