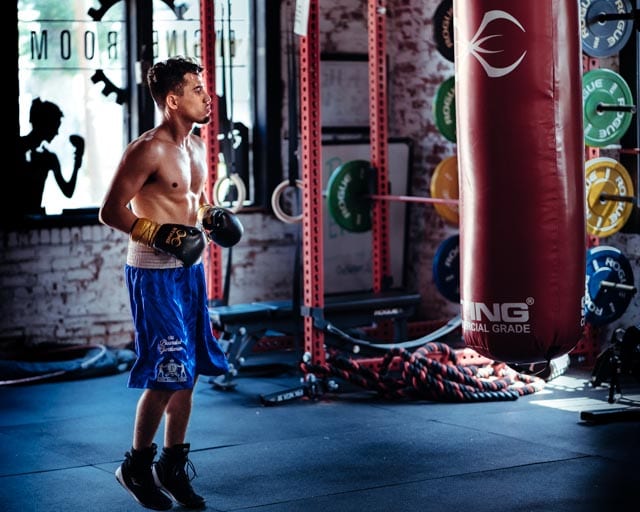 The “Making of Champions” is a podcast that airs every Thursday at 5 pm ET on the Joe Louis Bourbon Facebook Page with Tonya Cole and yours truly. This week’s guest on the program is featherweight David “King David” Perez, who is currently 1-0 and fresh off his victory against Gabriel Tacu back in March.

Perez looked back with us in his pro debut against Tacu, and the takeaway from his clear unanimous decision victory after four rounds was a

“I felt really great about it,” Perez told us on the Making of Champions Podcast. “It was just another feeling, especially the atmosphere having everyone come out there. A little nervous but not of the fight, just the people there. I felt great starting trying to figure him out in the first round, as the rounds picked up, I started getting his timing better, and I started seeing more places for that right hand.

That right hand would lead to knockdown in the fight for Perez and would’ve gotten more had this contest gotten more than four rounds.

Perez as an Ambassador for Sting Sports and is one to keep an eye on as he moves up the ranks. He also explained to us that the one thing that boxing has given to him the most is Confidence.

“Confidence is the number one thing that I’ve gained from it, and I think that is a very big thing to gain from it. It’s changed the whole aspect in everything that I do, how I do it, and just very grateful to know that this sport has molded my life into how it is,” Perez said.

Feel free to listen below with our conversation with David on his journey into boxing, mentoring, and even acting! Afterward, head on to the Joe Louis Bourbon Webpage for a chance to win a “Night At the FIghts” experience!

They call him "King David" and this 21-year old boxer from @engineroomboxing in Tulsa has made quite a name for himself with 50 amateur bouts. Now David Perez has gone pro and he's got a second fight coming up. Join Hosts Tonya Cole and Marquis Johns from @bigFightWeekend as they watch the fight, and see first-hand why this young man has a bright future inside and outside of the ring.

Premier Boxing Champions is up and running!
New match ups but same focus for Leo, Williams
Advertisement
To Top