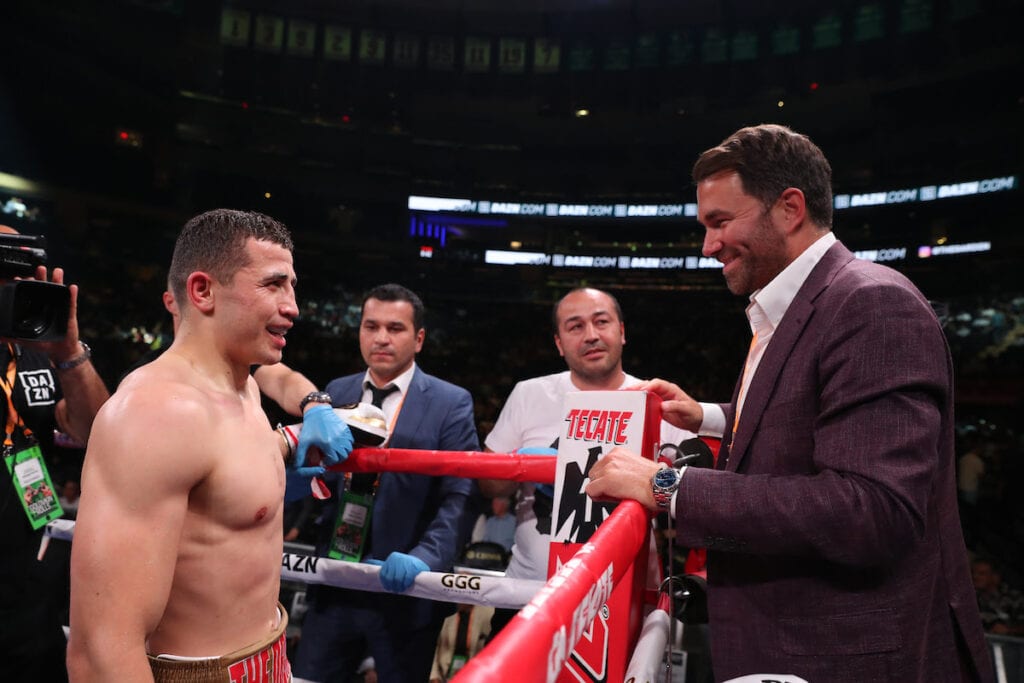 Israil Madrimov is looking to steal the show again to convince promoter Eddie Hearn to put on a huge show in Uzbekistan, as he faces Eric Walker in a final eliminator for the WBA World Super-Welterweight title. The bout will be in the streets of downtown Tulsa, Oklahoma on Saturday night (August 15) live on DAZN.

Madrimov (5-0 5 KOs) has made an electric start to life in the paid ranks, leaving his decorated amateur career behind and winning a title in his first pro outing in November 2018 to signal his intentions.

No opponent has taken the Uzbek star into the seventh round after five fights, and while Walker (20-2 9 KOs) has arrived in Tulsa confident of stopping Madrimov’s march and adding to his own incredible story, ‘The Dream’ can take a giant step towards his goal of becoming a World ruler with a victory.

We speak on this event in the latest edition of our podcast with Todd Grisham who will be calling this fight. Check us out below!

Boxing is the number one sport in Madrimov’s homeland and they recently celebrated their first World champion when Murodjon ‘MJ’ Akhmadaliev became the unified Super-Bantamweight ruler in January with victory over Daniel Roman in just his eighth pro outing.

Madrimov still has ambitions to beat his ‘brother’s’ record and aim to unify at 154lbs before eight fights, targeting a future clash with the winner of the September unification battle between IBF and WBA Super champion Jeison Rosario and WBC king Jermell Charlo, but winning a World title is the key, and if that can happen in Uzbekistan, the 25-year-old believes it would be a historic night for his country.

“There have been talks overdoing an event in Uzbekistan with Eddie Hearn, and it’s easier to do now with MJ as a World champion, it would be a huge event,” said Madrimov. “Our people are crazy boxing fans and would fill up any venue in the country, we have support from the government, so I am sure that it would be a sold-out stadium success and people would remember it for years.

“MJ made history and we’re happy for him as our friend, brother, and teammate, it’s unbelievable what he achieved, unified champion in eight fights – but I still have time to beat him!

“Right now, the focus is Eric on Saturday, not looking past that. As soon as business is taken care of, we move on and we want to fight the champion, whoever that is. Rosario and Charlo are fighting each other, whoever has the belts I’m ready to fight them.

“Every fight for me is very important. I started off with a title fight on debut and my last fight was an eliminator, so they are all important and they keep getting bigger. This is a final eliminator and that’s big for me because win this and the next fight should be for a World title, the champion cannot avoid me then. I don’t call people out, I just want to be in a position to fight for titles. I want to build my own legacy and history by becoming World champion and I want to break records.”

Madrimov’s clash with Walker is part of a massive night of action as Cecilia Brækhus (36-0 9 KOs) goes for history in the 26th defense of her undisputed Welterweight crown against unified Super-Lightweight champion Jessica McCaskill (8-2 3 KOs) in the unique setting of the downtown Tulsa streets as Matchroom return Stateside.

Madrimov’s fellow countryman Shakhram Giyasov (9-0 7 KOs) will now face Wiston Campos (31-7-6 19 KOs) after second replacement opponent Rey Perez was ruled out following original opponent Francisco Rojo being forced out of the bout after testing positive for COVID-19 during his training camp in his home city, and a trio of young talents complete the card in Nikita Ababiy (8-0 6 KOs), Raymond Ford (5-0 2 KOs) and the debut of amateur star Marc Castro

Docherty wants to beat Fox in style Friday
JoJo Diaz signs with MTK Global
Advertisement
To Top
We use cookies to ensure that we give you the best experience on our website. If you continue to use this site we will assume that you are happy with it.OkPrivacy policy