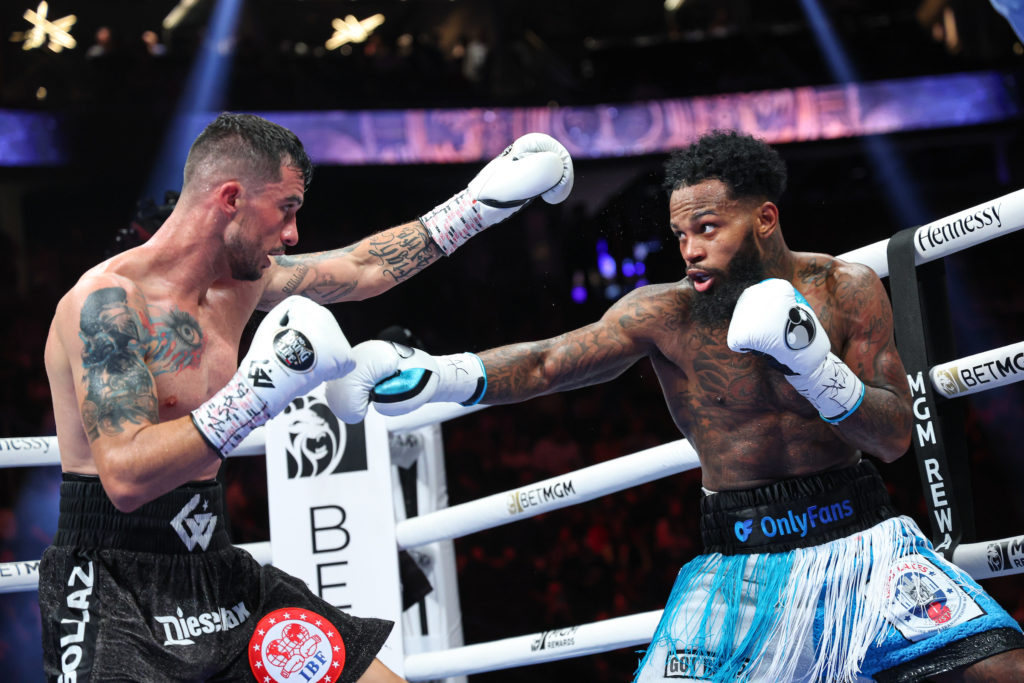 LAS VEGAS – Junior welterweight Montana Love and Gabriel Valenzuela exchanged early knockdowns but it was Love who went on to win a unanimous decision in the co-feature on the Canelo Alvarez-Dmitry Bivol undercard on Saturday night at T-Mobile Arena.

All three judges scored the fight 114-112 for Love, who was in his second fight since signing with Matchroom Boxing.

Late in the first round, Love (18-0-1, 9 KOs), 27, a southpaw from Cleveland, dropped Valenzuela with a right hook to the side of the head. Valenzuela returned the favor 30 seconds into the second round when he connected with a left to the forehead that briefly put Love on the mat.

From there they went back and forth with sporadic action, although Valenzuela appeared to stun Love with a series of shots in the final half minute of the fight.

Giyasov (13-0, 9 KOs), 28, of Uzbekistan, who trains alongside Bivol, was moving up to full-fledged welterweight for the bout.

In the fourth round, Giyasov landed a clean left hook that sent Gomez to his rear end 90 seconds into the round. Gomez got up quickly, however, and did not appear badly hurt.

Giyasov scored another knockdown with about a minute left in the seventh round when he landed a short right hand on his chin. Gomez rallied though and was landing shots as the round ended. Giyasov registered a third knockdown on a right uppercut early in the 10th round.

Castro won 60-54 on all three scorecards in a fight he dominated from the opening bell. He laid a lot of leather on Vicente, including bloodying his nose in the third round. Castro had him in trouble in several rounds, but Sosa found a way to survive the constant onslaught.

Virtually nothing had happened before the 276.2-pound Zhang hammered the 222.6-pound Alexander with a straight hand down the middle that knocked him out. Referee Robert Hoyle did not bother to count as he waved it off at 1:54. Alexander still appeared out of it for a minute or two after the fight as he was helped to a stool.
Alexander, who had never previously been stopped, was a late substitute for Croatia’s Filip Hrgovic (14-0, 12 KOs), 29, a 2016 Olympic super heavyweight bronze medalist. He and Zhang were supposed to fight in an IBF title elimination fight for the right to earn a mandatory shot at one of the belts held by Oleksandr Usyk.

Super middleweight Aaron Silva (10-0, 7 KOs), 24, of Mexico, stopped Alexis Espino (9-1-1, 6 KOs), 22, of Las Vegas, in the fourth round for a mild upset in their scheduled eight-rounder.
They both landed their share of solid shots but Silva took over in the fourth round. He rocked Espino with a right hand and never stopped throwing. He backed Espino to the ropes and hurt him with another right hand. As Silva continued to tee off and Espino began to further sag, referee Celestino Ruiz stepped in at 1:17.

Junior lightweight Elnur Abduraimov (9-0, 8 KOs), 27, a southpaw from Uzbekistan, dropped Manuel Correa (11-1, 7 KOs), 31, a Miami-based Cuban, three times in the second round for a knockout victory.
Abduraimov, a former amateur standout, who won an Asian Games gold medal in 2017, scored the first knockdown on a straight left hand that bloodied Correa’s nose. Moments later Correa was down against from an overhand right and then when Abduraimov cracked him with a left hand that sent him into the ropes, referee Robert Hoyle waved it off at 2:43.