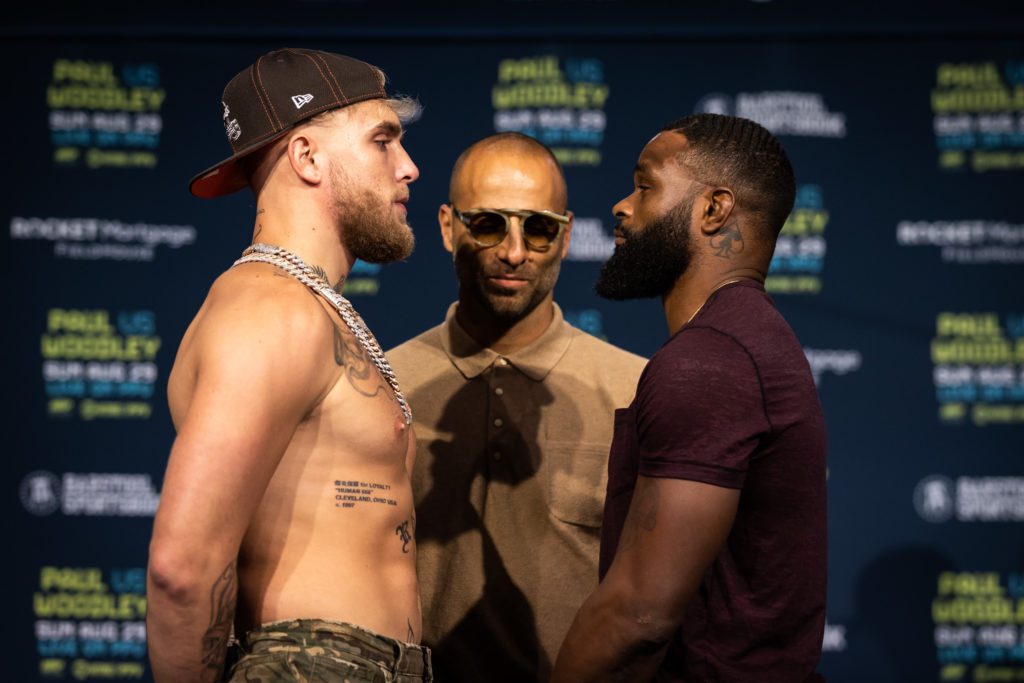 For the second time this year, former actor turned Youtuber and now start-up boxer Jake Paul will headline another PPV on Sunday night. This time the bout is on Showtime premium cable in Cleveland against former UFC Welterweight champ Tyron Woodley.

The two stepped on the scales and faced each for the final time pre-fight Saturday afternoon, with both making the contracted weight range of 185-190 lb.,

As for Paul destroyed former amateur wrestling star and brief MMA fighter Ben Askren in just over a minute of round one of their May PPV bout on the Triller app.

That improved the 24-year-old Paul to 3-0 as a pro boxer, although he’s still yet to fight a legitimate boxer. Paul and Triller boasted over 1.3 million PPV buys, which would have been a rousing success. However, that number of audience has never been independently verified and is believed to have been significantly lower.

Hear us preview the Paul-Woodley PPV and fight card on the latest “Big Fight Weekend Podcast” with Marquis Johns and our guest Dan Canobbio of “Inside Boxing Live” by clicking below,

As for the 39-year-old Woodley, he won his UFC title by KO in the first round over Robbie Lawler in July of 2016. He defended it four times before losing to Kamaru Usman by unanimous decision in March 2019.

“I’m almost falling asleep over here listening to this guy. It’s disgusting how much of a clown people have to be to be recognized. He’s got the appearance of being about that action down, but I’m really like that.

“This is the fight game. You can say what you want to say, and you can do what you think fighters do. Jake does all the things to build the fight, but we’re really here now. He’s getting hurt on Sunday.”

Now, the talking is done, and the first question that will be answered is can Paul land the smashing right he’s shown against the previous non-boxers? Will Woodley actually be able to pose a challenge, or could the fight turn into a boring affair with two inexperienced boxers not being able to figure the other out for a few rounds?

Showtime is banking that it will be exciting, and we’ll find out soon enough.