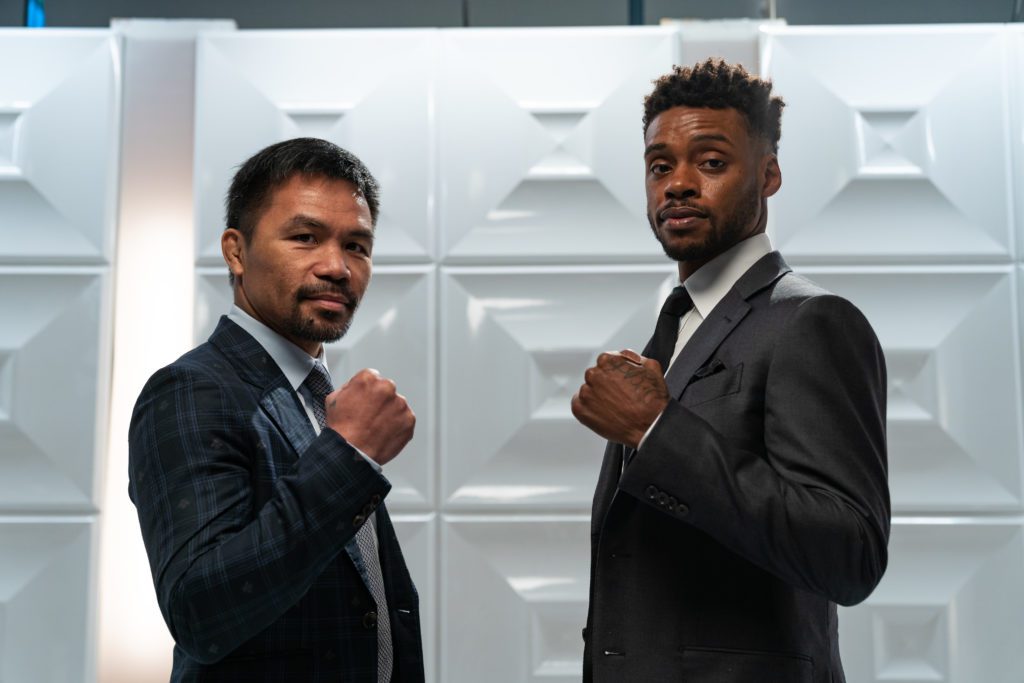 Even though his showdown with Unified World Welterweight Champion Errol Spence is not for another couple of weeks, on Friday eight-division world champion and future Hall-of-Famer Manny Pacquiao got a big victory outside of the ring. This, as a California judge denied an injunction trying to stop the Spence fight from happening.

Official: The judge has made his final ruling and denied Paradigm's request for an injunction to stop #PacquiaoSpence. Statement from Pacquiao attorney Dale Kinsella: “As Senator Pacquiao correctly said after this lawsuit was filed in June, he has an absolute right to (moe)

“As Senator Pacquiao correctly said after this lawsuit was filed in June, he has an absolute right to participate in the August 21 bout with Errol Spence. Today the Court agreed and resoundingly rejected Paradigm’s injunction publicity stunt in a strong and detailed decision. Senator Pacquiao looks forward to his bout with Mr. Spence on August 21.”

Hear us discuss the lawsuit and the anticipation of the upcoming Pacquiao-Spence fight on our “Big Fight Weekend” Podcast by clicking below:

As we have written, Paradigm is upset because they believe that Pacquiao went back on their agreement for a two fight deal to be promoted and arranged by them. They further want to be refunded what they say was a $3 million+ purse advance to Pacquiao for the proposed first fight of the deal.

Pacquiao and his legal team countersued last week and they contend that the $3 million+ was not tied as part of advance payment for a proposed upcoming bout with Paradigm. But, rather it was a signing bonus to do a deal with them. Pacquiao further believes he was lied to about the making of a fight with UFC star Conor McGregor, also repped by the Los Angeles-based Paradigm. And, that Paradigm also didn’t live up to the lucrative endorsements they promised Pacquiao to sign with them.

Paradigm filed their multi-million dollar lawsuit in late June against Pacquiao in Orange County civil court, claiming breach of contract among other things.

They further claimed in writing that they were able to negotiate a $25 million fight purse for Pacquiao for a bout with former Jr. Welterweight World champ Mikey Garcia that would have taken place May 15, 2021, in Dubai, United Arab Emirates. Paradigm further contends Pacquiao was to receive a $5 million purse advance for the proposed Garcia fight.

That deal fell apart after Pacquiao attempted to make that $5 million advance a guarantee, even if he did not compete, per the complaint.

“Pacquiao knew full well that Paradigm had exclusive rights to schedule his next two immediate fights,” Paradigm attorney Judd Burstein wrote in the complaint. “Nevertheless, in bad faith and material breach of the parties’ contracts, Pacquiao, upon information and belief, had surreptitiously entered into a contract to fight Spence.”

Obviously, Judge Schwarm, who heard arguments on virtual video call Thursday, did not agree enough to give the agency their injunction.

This paves the way for Pacquiao to fight for the first time in over two years against the unbeaten IBF/WBC 147 lb. champ Spence at the T-Mobile Arena in Las Vegas. Pacquiao’s last fight was also in the desert defeating previously unbeaten Keith Thurman in a spectacular 12 round performance.

As for the wrangling on the money that was advanced to Pacquiao, that will take months and maybe years to figure out and settle between Paradigm and Pacquiao’s lawyers.