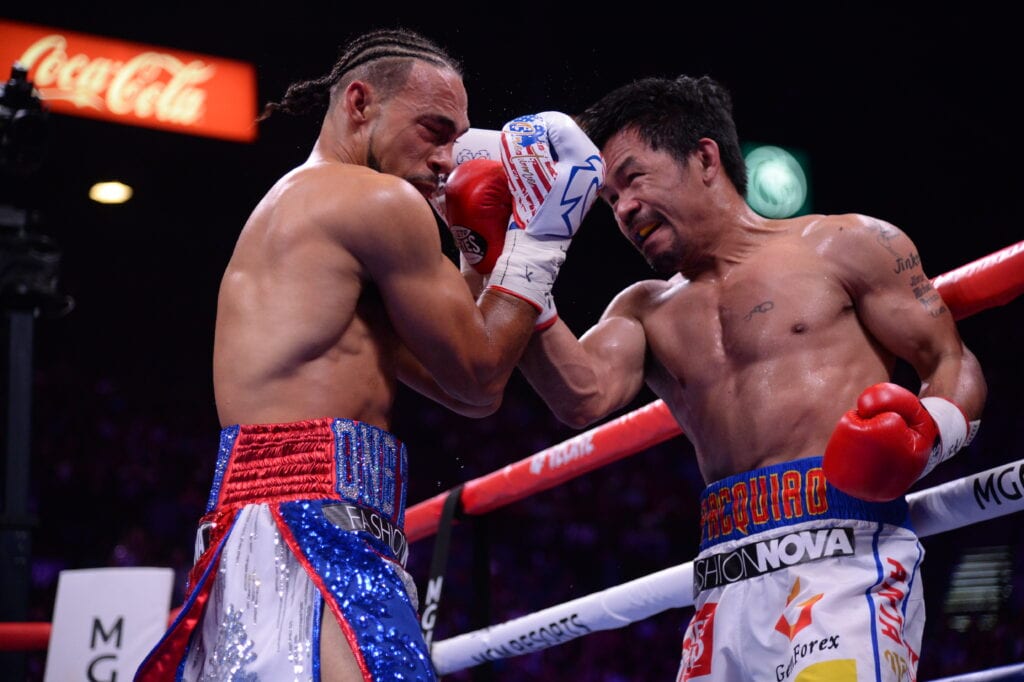 First, Paradigm has escalated things by wanting a California judge to give them an injunction and stop Pacquiao’s mega-fight scheduled for later this month in Las Vegas against Unified Welterweight champ, Errol Spence. But, the “Pac man’s” legal team is firing back by saying Paradigm has been misrepresenting everything to the Filipino hero the whole way.

Boxing insider Dan Rafael has written extensively about the legal “back and forth” for World Boxing News,

From his latest item for them,

“On Friday, Pacquiao filed a cross-complaint in the same court against Paradigm Sports in which he accused Paradigm of breach of conduct, breach of fiduciary duty, and fraud, among other allegations.

“Manny Pacquiao’s cross-complaint filed (Friday) reveals in detail the complete sham nature of Paradigm’s complaint,” Pacquiao attorney Dale Kinsella said in a statement. “We look forward to exposing Paradigm’s conduct in front of a jury and recovering both general and punitive damages.”

His item goes on to detail that Pacquiao believes he was lied to about the making of a fight with UFC star Conor McGregor, also repped by the Los Angeles-based Paradigm. And, that Paradigm also didn’t live up to the lucrative endorsements they promised Pacquiao to sign with them.

As we wrote previously, Paradigm says the gave Pacquiao a $3 million advance towards making his next fight and they want it back. That’s now part of the dispute, as well.

The agency filed a multimillion-dollar lawsuit in late June against Pacquiao in Orange County civil court, claiming breach of contract among other things.

They further claimed in writing that they were able to negotiate a $25 million fight purse for Pacquiao for a bout with former Jr. Welterweight World champ Mikey Garcia that would have taken place May 15, 2021, in Dubai, United Arab Emirates. Paradigm further contends Pacquiao was to receive a $5 million purse advance for the proposed Garcia fight.

That deal fell apart after Pacquiao attempted to make that $5 million advance a guarantee, even if he did not compete, per the complaint.

“Pacquiao knew full well that Paradigm had exclusive rights to schedule his next two immediate fights,” Paradigm attorney Judd Burstein wrote in the complaint. “Nevertheless, in bad faith and material breach of the parties’ contracts, Pacquiao, upon information and belief, had surreptitiously entered into a contract to fight Spence.”

Back to whether Paradigm has a legitimate chance at an injunction to stop Pacquiao-Spence? The short version is: that’s highly unlikely.

Pacquaio is attempting at 42 years old, to come off a two year layoff and beat one of the top lower weight fighters in the world. The bout is highly anticipated and is scheduled for the T-Mobile Arena in Las Vegas and on PPV.

Still, Rafael reported that an assigned Orange County civil judge will hold a video conference hearing on Thursday to hear both sides.

As for the wrangling on the money advanced to Pacquiao, that will take months and maybe years to figure out and settle.