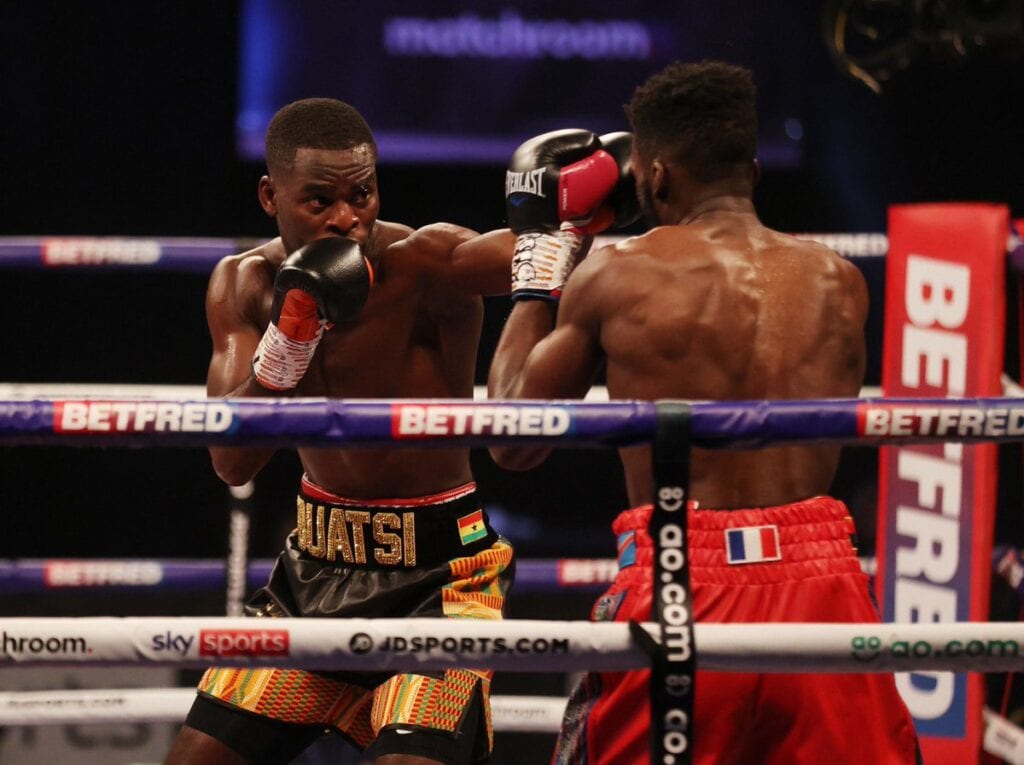 Saturday night in Manchester, England, unbeaten Light Heavyweight contender Joseph Buatsi made his 2021 return to the ring and he did not disappoint. Fighting unbeaten, but little-known Daniel Dos Santos, Buatsi scored a devastating one punch KO in the fourth round of their bout.

Fighting For the first time since his October KO win over Marko Calic last October, the Ghana born-Buatsi who now trains in London scored a second-round knockdown of Dos Santos, who then grabbed and held while he cleared his head to that frame. Dos Santos, who was several inches bigger, was able to keep Buatsi away for the early part of the fight.

There was also an awkward incident later in the third round, as Dos Santos grappled Buatsi in a clinch and wrestled him to the ground. The fighters got up and Dos Santos was warned. And, it was obvious that it was only going to be a matter of time for this one to end.

That came when Buatsi, now 14-0, 12 KOs, used a feint and a huge right hook over the top of  Dos Santos’ guard, right on the chin. Dos Santos appeared to be out before he hit the canvas on his right side and referee Victor Loughlin didn’t bother to count stopping things at 2:44 of the fourth.

Buatsi is ranked second by the WBA and is in line for a possible shot down the road with the Unified Light Heavyweight champ, Russian Artur Beterbiev. It is believed that the Buatsi might be part of the upcoming undercard of the proposed Anthony Joshua – Tyson Fury Undisputed Heavyweight title showdown- should that bout and card ever get finalized for this Summer.

Cunningham came into the fight 28-6 and a 10-1 Underdog against the previously 18-0 Yafai.

And, decorated British amateur Heavyweight Solomon Dacres scored an easy six-round decision in his pro debut over Bulgarian journeyman, Mladen Manev. Dacres has been a recent sparring partner of Joshua’s.