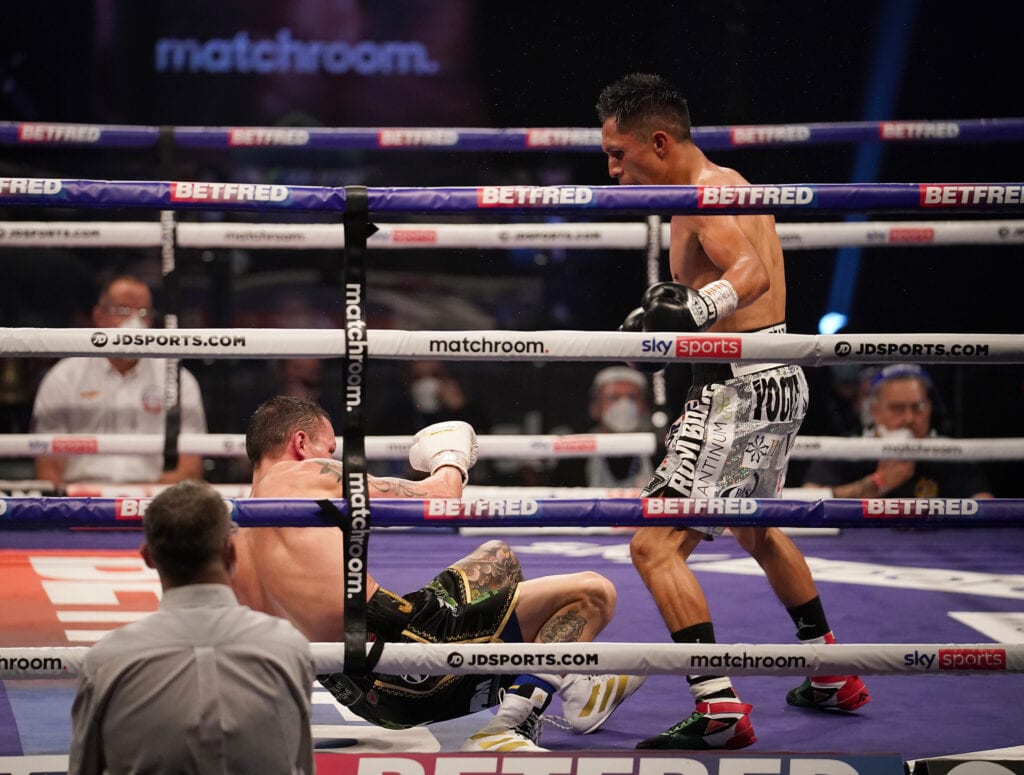 Former IBF Featherweight Champion Josh Warrington at had big plans for 2021, however, all of that ended Saturday night in a crumpled heap. This, as little-known Mexican fighter Mauricio Lara stunned Warrington for a 9th round TKO.

Warrington, 30-1, 7 KOs, had vacated the IBF belt three weeks ago, because he refused to fight their mandatory challenger Kid Galahad. Warrington beat Galahad by split decision in July of 2019 and didn’t have interest in rematch. Instead, he took the seemingly safer fight with Lara, essentially as a tune-up for other bouts he would liked to have had later this year.

But, in boxing the unexpected always seems to get in the way of plans and Lara had other ideas, while scoring the biggest win of his career and handing the Brit his first professional loss.

Mauricio Lara with the HUGE upset 😯

Lara knocked out previously unbeaten Josh Warrington in the 9th round. #WarringtonLara (via @DAZNBoxing)
pic.twitter.com/5IuhH3RGqT

Warrington was as much as a 25 to 1 betting favorite coming into the weekend, but was coming off of the 16-month layoff from the Galahad fight. But, while through the first three rounds he appeared to be a bit rusty, there was no indication of what was about to happen.

That’s when the man fighting for only the second time in his career outside of Mexico, caught Warrington with a huge left. It dropped the former 126-pound World Champ, stunning those at ringside in the Wembley Arena.

The Leeds, England, native Warrington barely survived the fourth round and was clearly wobbly as the fight went on. And, Lara, now 22-2, 15 KOS, continued to hammer him at times with rights and lefts. Eventually, the end came in the 9th round, as the 22 year old Lara caught him with a lead right followed by another big left hook that wobbled Warrington, again.

Then, a series of left hooks followed by a right to the body and one last big left to the head dropped Warrington on his back and the referee did not bother to count.

He was tended to by paramedics for a couple of minutes receiving oxygen and then being helped to his feet to walk back to his corner.

There had been hope that Warrington would be  fighting China’s Xu Can later this year in what would have ended up being a non-title fight anyway because of the vacating of the IBF belt.

Instead, Warrington now must go back to square one after being hammered and beaten by a virtual unknown in the division.