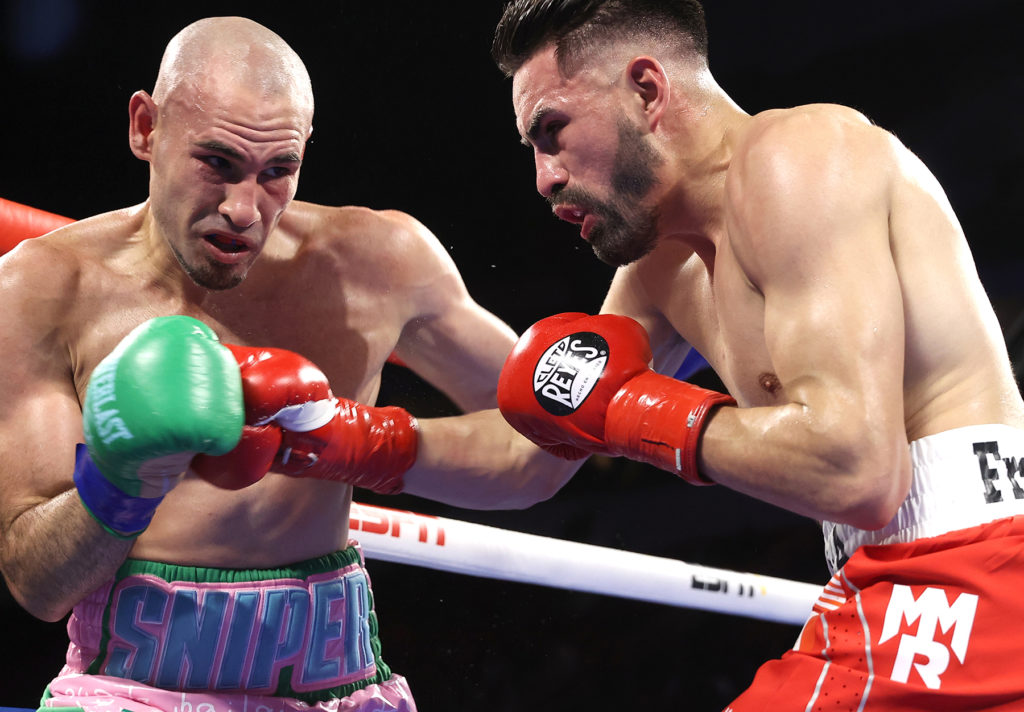 On Friday night in Fresno, CA, former Unified 140 lb. world champ Jose Ramirez was back in the ring and headlining for Top Rank Boxing. And, he got a much needed impressive showing in a 12 round decision over veteran Jose Pedraza to close the Top Rank Boxing/ESPN show.

Ramirez was in control early, including a big end to the fourth round where he hammered Pedraza to the ropes with series of lead right hands before the bell. Pedraza, known as “the Sniper” did occasionally connect with left hooks in the middle rounds and was actually in the fight headed to the championship rounds.

However, all three judges gave the 10th-12th rounds to Ramirez to seal the win. It was his first fight since losing the Undisputed 140 lb. showdown to Scotland’s Josh Taylor in Las Vegas last May. That was the Northern Californian’s first pro defeat.

“Jose Pedraza is a smart, experienced fighter. He was going to find a way to survive and put up a fight. He was there boxing towards the end of the fight. My hat’s off to him and his team. He was well-prepared. It was a great fight. I got to see where I am right now,” Ramirez told ESPN in the ring.

“I’m going to go back, work and stay focused and stay active. That’s one thing that’s affected me these last couple of years. I’ve trained so many times for a little bit of fights. My inactivity, my discouragement throughout training camps, it really took a big toll on me. I’m ready to stay active and stay motivated. There’s a lot of really great fighters coming up to 140. There’s a lot of really good fighters at 140 right now.”

On the undercard, another Northern California amateur star Richard Torrez, who won the Silver Medal in the Heavyweight division at the Tokyo Summer Olympics last September, scored a KO in his pro debut. The 22 year old Torrez floored Allen Melson three times, including with a short left hook for the third time and for good in the second round in the resounding debut.

Also on the undercard, former rising star,  Gabriel Flores (21-1, 7 KOs) scored a hard fought 10 round, majority decision over veteran Abraham Montoya. The Stockton, CA Jr. Lightweight wore down, for the second straight fight and was fortunate to hang on to win on two of the judges cards. The third had the fight even at 95-95. Montoya repeatedly scored rights and lefts on the 21 year old Flores down the stretch of the fight causing more concern about weight drain, etc.

He was previously dominated and battered for 10 rounds last September by Luis Alberto Lopez. Flores suffered a swollen face in the late rounds in a fight that should have been stopped. This as the prospect Flores was hopelessly behind on the cards. That was his first loss and now, after struggling again with fatigue in the late rounds, Flores said after the fight he will move up to Lightweight.