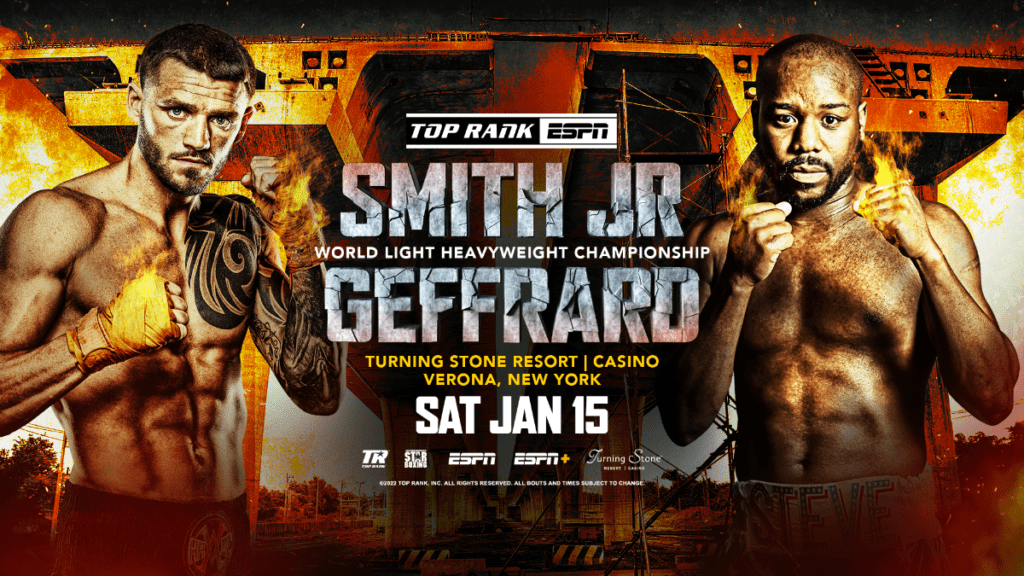 Johnson Out, Geffrard In To Face Joe Smith Jr

In the 10-round co-feature, featherweight contender Abraham Nova (20-0, 14 KOs), who was originally slated to fight Jose Enrique Vivas, will fight Dominican veteran William “El Gago” Encarnacion (19-1, 15 KOs) after Vivas dropped out with an injury.

“I give Steve credit for taking this fight on short notice,” Smith said. “He is a tough guy, and I expect him to bring everything he has for this opportunity. I’m ready to fight regardless of who is in the ring with me. My goal is the same, which is to defend my world title and keep it on Long Island where it belongs.”

Geffrard said, “This is the opportunity of a lifetime. It’s crazy how boxing works. One moment I’m thinking about boxing on a local show, then the phone rings for a chance to fight for the WBO world title on ESPN. Unreal!”

Smith (27-3, 21 KOs), the fighting pride of Long Island, won the title last April with a majority decision over Maxim Vlasov. His proposed October return was postponed due to a COVID-19 diagnosis, and with Johnson out, he turns his attention to Geffrard (18-2, 12 KOs), a 31-year-old native of Miami, Florida.

Geffrard is a nine-year pro who has won 18 straight fights since starting his career 0-2. He upped his record to 18-2 last March, winning an eight-round unanimous decision over longtime contender Denis Grachev. Geffrard had a fight scheduled for Jan. 8 in Delray Beach, Florida, but the “South Florida Cinderella Man” jumped at the chance to fight Smith on eight days’ notice.

What’s Not Next For Filip Hrgovic?
Nuñez Stops Arrieta To Close Out ShoBox
Advertisement
To Top