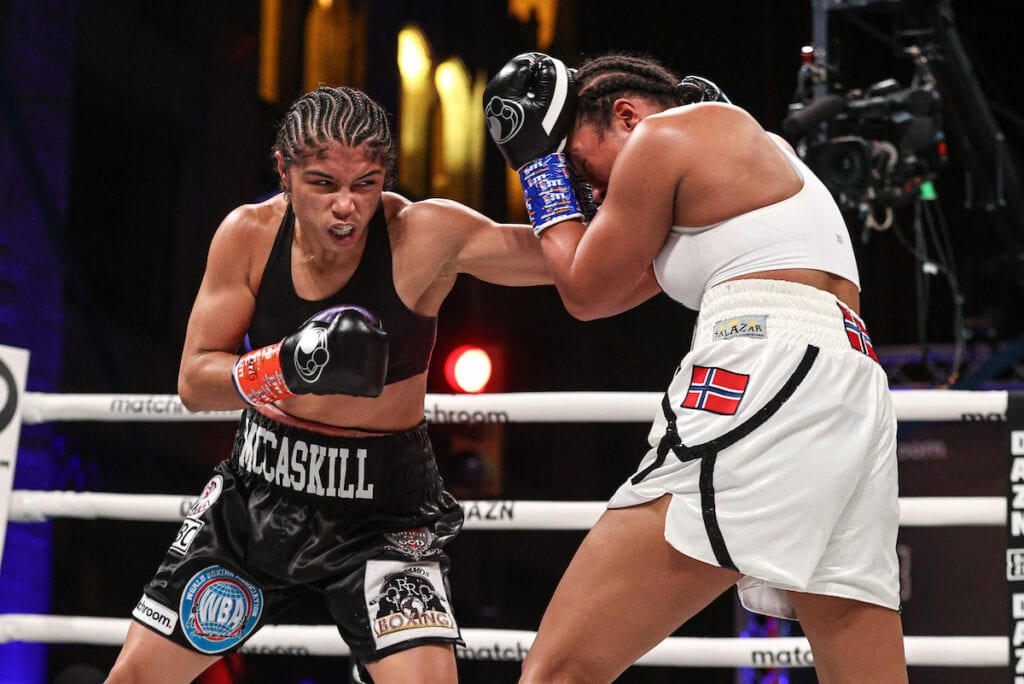 We were looking for history Saturday night in Tulsa, Oklahoma, as unbeaten Cecilia Braekhus looked for her 26th consecutive women’s World Welterweight Title defense. Instead, Jessica McCaskill decided to write her own name in the record book with a stunning 10 round decision to dethrone the 10-year champion.

In an historic performance in the streets of downtown Tulsa, where for the first time ever, a female championship fight was the main event for Matchroom Boxing and the DAZN streaming service, the challenger McCaskill got off to a torrid start and never looked back.

McCaskill, who was a 6-1 underdog at most online sports books, was the quicker puncher landing straight rights and combinations, as Braekhus seemed a step slow in the early rounds. Gradually, the fighter known as the “First Lady,” started to land some. However, McCaskill, now 9-2, was never in trouble, much less down.  And McCaskill, won the seventh and the ninth rounds, as well.

In the end, the St Louis native who now fights out of Chicago, pulled off one of the biggest shockers the sport of boxing has seen in recent memory. No, it does not quite rise to the level of Andy Ruiz’s June 2019, 7th round TKO upset at the Unified Heavyweight champion, Anthony Joshua.

But, it still is a victory that will resonate throughout women’s boxing and for fans and observers in the U.S. and Europe.

That’s, because the Dutch born-and-bred Champion, Braekhus, now 36-1, was seemingly unbeatable during her record roll of the last decade.

However on this night, it seemed that the champ was outgunned at 38 years of age by a fighter that was younger, and at times, simply too fast for her.

At the end of the ten rounds, there was definitely drama, as to whether Braekhus had done enough to rally and hang on to her four championship belts. But, the judges at ringside gave McCaskill the decision on scores of 97 – 94, 97 – 93 with a third judge tallying the fight even at 95 – 95.

As famed ring announcer Michael Buffer read the decision and proclaimed, “The NEW….,” it reverberated off the skyscrapers in downtown Tulsa. Simultaneously, McCaskill looked skyward with a smile ear-to-ear, as she pumped both fists in the air over her head.

A short time later, she was handed the WBA, WBC, IBF and WBO women’s 140 lb. belts to carry and wear. And, McCaskill was thrilled, as you could imagine, with having pulled the upset that will be talked about for months and maybe even, years to come.

“I knew it takes a lot to take the title from the champion. I just kept saying in my head, ‘and new’, ‘and new’…. for me now, to sacrifice everything to put this sport first to make a difference? That’s what that fight was about.”

Meanwhile, it was Braekhus in a post fight interview with DAZN, who almost seemed to be relieved that her near 11 year reign was over and the now former champ indicated that it may have been her final fight with the defeat.

However, there could be much more money on the line for a rematch, now that McCaskill handed Braekhus her first loss, and took away her titles one win short of surpassing 25 consecutive Heavyweight Championship defenses of the late great Joe Louis.